The following is a list of left-wing violence in the Trump era during 2020, this being a subpage whose information was moved here from the main content page. Democrat presidential frontrunner Joe Biden has a reputation as a street thug in Washington, D.C..[82] It didn't go over well when he attempted to bully a blue collar worker in Michigan's Democrat primary.[83]

The real “face” of the instigators in Minneapolis. Screenshot from FB video of guy who smashed Autozone windows, carrying hammer, trying to sneak away.[98][99][100] 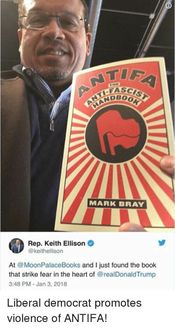 Note: Many of the violent actions in the pre-planned Marxist uprising across the United States beginning May 28, 2020 are too numerous to count and may not be recorded here.[122][123] 4 year old LeGend Taliffero was murdered by Marxist gangbangers while sleeping in his bed during the BLM riots.[144]

“There is no doubt. This was an organized effort last night,” she said. “There were clearly efforts to subvert the peaceful process and make it into something violent.”[153]

officers at about 12:16 a.m. found a container of gasoline, bricks and “materials used to assemble crude incendiary devices commonly known as a ‘Molotov cocktail’” inside a red Mitsubishi Outlander parked on Central Avenue, near the police department at 1301 First Ave. N, according to arrest reports.[154]

BLM terrorist fires into a car in Provo, Utah.[170] Bernell Tremmell was murdered by Marxists in Milwaukee in July 2020 for his outspoken beliefs in freedom, justice, and racial equality.[235] Rep. Pelosi entering a salon without a face mask.

Leading up to the Biden Putsch, Marxist insurrectionists laid siege to the White House.[387]

Nebraska bar owner Jake Gardner on the left and rioter/thug James Scurlock on the right. The latter was part of a mob invading Gardner's bar amidst violent protests following the death of George Floyd. Scurlock was fatally shot, and Gardner was subject to liberal attacks because he killed a black man. The far-left Daily Beast published a vicious smear attacking Gardner and those backing him after he committed suicide.[427]