Ellison opposes the police and is an advocate of defunding the police and lawlessness in the traditional Western civilization sense. Ellison is, however, the first Muslim to take the oath of office on the Koran to serve in the United States Congress.

Ellison went to an Islamic hajj pilgrimage to Mecca in the winter of 2008, becoming the highest ranking U.S. official since John Brennan to make the pilgrimage. After claiming he paid for the trip, it was determined to be paid for by a U.S. group tied to Islamic extremists, the Muslim American Society of Minnesota,[1] a group founded by the Muslim Brotherhood, which Ellison allegedly knows nothing about.[2]

Despite being the DNC's top fundraiser which ordinarily would bestow the chairmanship on a candidate, Ellison was relegated to the back of bus as Deputy Chair, a position created especially for him. He was given this role in February 2017 by a vote of the full Committee after losing the election for Chair to Thomas Perez, who has been accused of vote rigging delegates for the nomination of Hillary Clinton in 2016.

Ellison is known for having ties to radicals such as Louis Farrakhan[3] and Erwin Marquit.

In 1992, Minneapolis Police Officer Jerry Haaf was executed at the Pizza Shack by four members of the Vice Lords Gang. The gang’s leader, Sherif Willis, was shown to have been involved in the planning of the murder, but he was never charged because police said they lacked sufficient evidence. At the time, Ellison was a Minneapolis attorney in private practice. Willis was a convicted murderer who ran a gang front called United for Peace. Following this public execution, within a month of Haaf’s murder, Ellison stood shoulder to shoulder with Willis, going so far as to participate in the organization of a gang demonstration against police. Months later, Ellison spoke at another demonstration in support of one of Haaf’s killers.[4] In October, 1992, Ellison helped organize a United for Peace demonstration against the Minneapolis Police. Ellison stated, “The main point of our rally is to support United for Peace in its fight against the campaign of slander the police federation has been waging.” 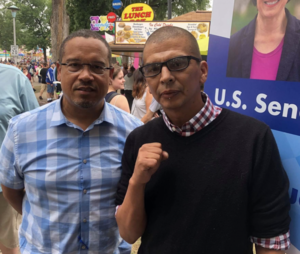 In 2000 Ellison spoke at a fundraiser for Symbionese Liberation Army (SLA) member Kathleen Soliah, who had been a fugitive on the run from justice for 25 years, on charges of attempting to bomb L.A. police officers in 1975. In his National Lawyers Guild speech, Ellison had kind words of support for cop killers Mumia Abu-Jamal and “Assata Shakur” aka Joanne Chesimard, who was wanted for the murder of New Jersey State Trooper Werner Foerster in 1973.

The House of Representatives voted overwhelmingly to defund ACORN, 345–75 on September 17, 2009. Seventy-five Democrats, including Ellison, stood with ACORN and voted no.[5] This was despite widespread allegations of voter fraud, ties to prostitution including child trafficking, and defrauding the IRS.

As DNC Deputy Chair, Ellison was an early community organizer and promoter of the violent fascist organization Antifa.

He represented the 5th Congressional District of Minnesota which is comprised heavily of Somali refugees. He was replaced by Ilhan Omar.

It is traditional for newly-sworn members of the House of Representatives to repeat their oaths with their hand on a Bible for photographers.[6] When Ellison was ceremonially "sworn-in," he used a Koran that once belonged to Thomas Jefferson.[7]

In 2015 Ellison attempted to deny Geert Wilders the right to enter the United States.

Violations of the Logan Act

Ellison traveled with House Speaker Nancy Pelosi to Damascus to visit Syrian dictator Bashar al-Assad in 2007. The visit occurred despite protests from the US State Department and Bush White House for fear of delivering mixed signals to the Assad regime. USA Today headlined a story declaring the Democrat delegation brought "a message of peace for Assad".[10] In 2011, the Democrat regime of Barack Obama, and Secretary of State Hillary Rodham Clinton announced, "Assad must go", unleashing the Syrian Civil War which has claimed 300,000 lives. One third of all Syrians as of 2016 are homeless, and six million Syrian refugees have entered Europe, straining the European social system. Bashar al-Assad remains firmly in power, now supported by Russian troops in Syria.

Born in Detroit, Michigan, he converted from Catholicism to Islam while in college. Ellison is quite controversial due to his past ties with the radical black supremacist group the Nation of Islam; he has also been accused of having had involvement in anti-Semitism.[11]