Democrats held a simulation in June 2020 called Transition Integrity Project (TIP) on how to drive President Trump from office if he wins the 2020 Presidential election. It has nothing to do with integrity and everything to do with stealing the election.

Marc Elias and John Podesta. Neither one were ever prosecuted for lying to Congress about making payments to FusionGPS for the Steele dossier.[11]

By “ignore” she means not bow to Democrats. By “law” she means Democrat election cheating.

Through a series of war games, she’s training the media and the Democrats on what to say and how to react to a Trump victory or a Biden win by cheating. Her goal is to legitimize cheating. This session also serves to prime the pump of public opinion and get America used to talking about ousting President Trump, no matter the real election result. Brooks said,

Through her obfuscation, it is evident what this entire meeting was: Democrat election cheating and stealing boot camp. The “respond” she has in mind is to a legitimate Trump victory. The ostensible reason for the training is a scenario where Trump won’t leave office after a loss. But the actual goal of those who attended is to kill a Trump victory, with the help of the media, in any way they can.[12]

Former U.S. Attorney Andrew McCarthy wrote about one of the results of the war games, and the fake basis for the meeting: “There is no rational reason to indulge the anti-Trump hallucination of a defeated president holed up in the Oval Office refusing to leave. If ever any president were to try such an inane thing after the constitutionally mandated divestment of executive authority, he or she would be escorted from the premises — hopefully, with whatever dignity could still be mustered under the circumstances.” Another scenario referenced the chaos of the United States presidential election, 1876.[13] 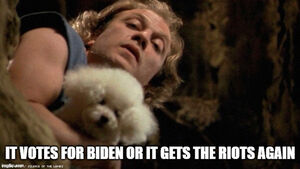 Internet meme once the coup plot was exposed.[14]

The Protect Democracy Project’s inception coincided with Donald Trump’s first election victory. It was born in “early 2017” by “a group of former high-level executive branch officials who served in the White House Counsel’s Office and upper echelons of the Department of Justice” from the Obama administration. Among the cohort are high-ranking officials such as Special Assistant to the President and Associate White House Counsel Michael Gottlieb, Solicitor General Donald Verrilli, and Senior Deputy Director of Operations and Director for Finance Beau Wright. Advisors to the group include a bevy of vocal Trump critics such as failed presidential candidate Evan McMullin, NYT reporter Anne Applebaum, and Jerry Taylor, President of the Niskanen Center, which has received hundreds of thousands of dollars from George Soros’s Open Society Institute. PDP’s mission statement vows that President Trump “must be blunted.”

The group boasts of the inclusion of marginal Republicans – all “Never Trumpers” including Mona Charen who was notoriously booed off of the Conservative Political Action Conference (CPAC) stage for attacking President Trump. But these former Republicans are window dressing for the organization which features a whopping 22 former Obama administration officials amongst its ranks.

PDP’s sister organization “United to Protect Democracy” – which files its reports together with PDP – was first reported on by Politico following the Trump inauguration. On the same day as the Politico article, the Daily Mail published a story linking the PDP’s operations to another ex-Obama official refuge known as The Moscow Project.[18] The Moscow Project would go on to promote the false Russia collusion hoax with the assistance of the establishment press.

PDP's IRS Form 990 reveals that Bassin and other staff making six-figure salaries as a result of their efforts which appear to amount to filing Freedom of Information Act requests, and supporting entities like TIP.