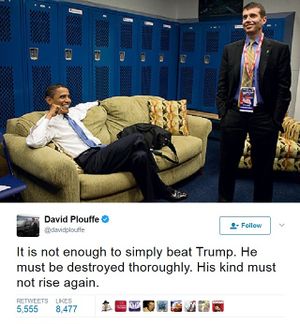 In January 2017, Plouffe was hired by Mark Zuckerberg to lead policy and advocacy at the Chan Zuckerberg Initiative. He led a board alongside Ken Mehlman.[1] In March 2020 Plouffe, published his book entitled A Citizen’s Guide to Defeating Donald Trump.[2] On page 81 of his book, Plouffe identified that the 2020 presidential election would come down to a “block by block street fight” to turn out the vote in the urban core, a key stronghold of Democratic Party votes. Plouffe specifically highlighted high turnouts in Milwaukee, Detroit, and Philadelphia as the key to a Democrat victory.

Soon after, the Center for Tech and Civic Life (CTCL) whose previous annual revenues never exceeded $1.2 million, began sending agents into states to recruit certain Democrat strongholds to prepare grants requesting monies from CTCL. For example, CTCL approved a $100,000 grant to the Mayor of Racine, WI in May of 2020 directing the Mayor to recruit four other cities (Green Bay, Kenosha, Madison, and Milwaukee) to develop a joint grant request of CTCL. This effort results in these cities submitting a “Wisconsin Safe Election Plan” on June 15, 2020 to CTCL and, in turn, receiving $6.3 million to implement the plan. This privatization of elections undermined the Help America Vote Act (HAVA), which requires state election plans to be submitted to federal officials and approved and requires respect for equal protection by making all resources available equally to all voters.

Documents obtained through court order revealed communication between the City of Philadelphia and CTCL emphasizing that CTCL paid election judges in Philadelphia and other election officials. CTCL mandated Philadelphia to increase its polling locations and to use drop boxes and eventually mobile pick-up units. Moreover, Zuckerberg monies allowed Philadelphia to “cure” absentee ballots in a manner not provided for in Republican areas of the state.

The provision of Zuckerberg-CTCL funds allowed these Democrat strongholds to spend roughly $47 per voter, compared to $4 to $7 per voter in traditionally Republican areas of the state.

Moreover, this recruiting of targeted jurisdictions for specific government action and funding runs contrary to legislative election plans and invites government to play favorites in the election process. The “Wisconsin Safe Election Plan” was not authored by the state, and considered state election integrity laws as obstacles and nuisances to be ignored or circumvented. Moreover, CTCL retained the right, in the grant document, to, in its sole discretion, order all funds returned if the grantee cities did not conduct the election consistent with CTCL dictates.

Effectively, CTCL managed the election in these five cities. And this plan violated state law in, at least, the following fashion:

1) The plan circumvented voter identification requirements for absentee ballots by attempting to classify all voters as “indefinitely confined” due to COVID and later, after Wisconsin Supreme Court criticism, by ordering election clerks to not question such claims.

3) Initiated the consolidation of counting centers, justifying the flow of hundreds of thousands of ballots to one location and the marginalization of Republican poll watchers such that bipartisan participation in the management, handling, and counting of the ballots was compromised.

According to the Amistad Project, these are but examples of radical changes in election processes that opened the door for significant fraud. This two-tier system allowed voters in Democrat strongholds to stroll down the street to vote while voters in Republican strongholds had to go on the equivalent of a “where’s Waldo” hunt. These irregularities existed wherever Zuckerberg’s money was granted to local election officials.

In Democrat Delaware County, Pennsylvania, one drop box was placed every four square miles and for every 4,000 voters. In the 59 counties carried by Trump in 2016, there was one drop box for every 1,100 square miles and every 72,000 voters. Government encouraging a targeted demographic to turn out the vote is the opposite side of the same coin as government targeting a demographic to suppress the vote[3]

In December 2010 Plouffe was paid $100,000 by an Iranian cell phone company for two speeches;[4] the following month he was appointed a Senior Advisor to Obama.[5][6]

On January 22, 2009, Plouffe announced the launch of Organizing for America.[7]

In February 2017, Plouffe was fined $90,000 by the Chicago Board of Ethics for the violation of ethics rules when he failed to register as a lobbyist after contacting Chicago Mayor Rahm Emanuel to help Uber with regulations for picking up travelers at Chicago airports. The board fined Uber $2,000 as well for hiring a lobbyist who violated the city's lobbying laws.[8]

In 2019, Politico reported he joined the Board of Directors of liberal nonprofit ACRONYM, where he would advise an anti-Trump digital campaign.[9][10]