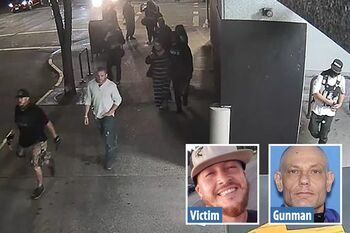 Aaron Danielson (d. August 29, 2020) was a member of the Patriot Prayer group who was executed by Antifa terrorists in Portland, Oregon on August 29, 2020.[1] Danielson was a native of Portland and used the pseudonym "Jay Bishop" to protect himself from Antifa.

The alleged killer, Michael Forest Reinoehl, 48, posted a manifesto on Instagram on June 16, 2020. In the manifesto Reineohl wrote, "I am 100% ANTIFA all the way! I am willing to fight for my brothers and sisters! Even if some of them are too ignorant to realize what antifa truly stands for."[2] Reinoehl has a previous extensive criminal arrest record. According to reports in June 2020 Reinoehl “and his teenage son were both arrested early Monday after an Oregon State Police trooper saw the pair apparently racing at over 100 mph in separate vehicles on Interstate 84 near North Powder.” An officer found “a loaded, concealed Glock pistol for which Reinoehl did not have a concealed handgun license.” Reinoehl was “charged with driving under the influence of a controlled substance, recklessly endangering another person and unlawful possession of a firearm. He was also cited for driving while uninsured, driving while suspended, and for speeding.” His son faced charges of “driving under the influence of marijuana and unlawful possession of a firearm,” the newspaper reported.[3]

On July 5, 2020 Reinoehl was arrested for “possessing a loaded gun in a public place, resisting arrest and interfering with police” during Portland's 2020 Marxist uprising. The Democrat prosecutor dropped all charges and Reinoehl was released.[4]

Danielson was murdered during a peaceful protest conducted by Patriots. The Patriots had been attacked throughout the day by violent Leftists.[5] Danielson had been stalked by Reinoehl right up to the shooting.[6] Early that same day Portland Democrat mayor Ted Wheeler sent a mocking letter to President Trump rejecting offers for federal assistance to quell unrest after 93 days of continuous riots. Wheeler referred to the criminal activists as "part of a proud progressive tradition."[7]

Danielson was specifically targeted as a supporter of Blue Lives Matter.[8] Murder suspect Michael Reinoehl was killed by Portland Police when they attempted to arrest him.[9][10]