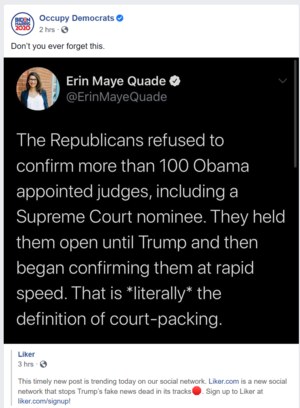 Occupy Democrats is a far-left progressive social media group and fake news site that has become infamous for its outrageous lies and propaganda. Occupy Democrats routinely calls Republicans and Trump "racist" for criticizing Obama.[2] They frequently idolize far-left Democrats such as Alexandria Ocasio-Cortez and Ro Khanna for pushing extremist ideals, though they have been known for favoring mostly anyone anti-Trump enough to their liking, including some RINOs and Moderate Republicans at times. When not spreading blatant fake news, the group often focuses on whining over Trump's tweets.

Occupy Democrats makes outrageously false claims about Barack Hussein Obama's record of "achievements", claiming that he created 15 million jobs and reduced the deficit by more than half. They represent the extreme left wing of the Democrat party and promotes Communist and socialist propaganda[10] (such as calling opponents of a job-killing $15 minimum wage "racist"). Even the liberal "fact-checking" website PolitiFact has found almost no "facts" promoted by Occupy Democrats to be true.[11][12] The group even falsely insinuate that the Republicans started the KKK, ignoring the fact that the Democrats started it and have supported it ever since.[13] Occupy Democrats go as far to claim Obama is the "greatest president ever", despite the opposite being true.[14]

The group claims that division sowed by Obama is the fault of Republicans.[15]

Occupy Democrats, like most Democrats, falsely portray Republicans as "racist", "sexist", gun-loving "rednecks" while making themselves look ignorant.[16] They claim that all the things the Republicans accomplished such as ending slavery, passing the civil rights act, giving women the right to vote, and giving blacks the right to vote were done by liberals and completely ignore the fact that liberal Democrats including Woodrow Wilson and FDR opposed most, if not all of those things.[17] The group stupidly and foolishly claim that the Republican Party is more dangerous than ISIS.[18] Occupy Democrats claims that all conservatives are "racist" for supporting traditional family values.[19] They furthermore absurdly claim that capitalist Republican spending priorities add more to the debt than socialist Democrat spending priorities.[20] They also exhibit signs of acute Moscow Mitch Syndrome.

According to Occupy Democrats, the opposition to Barack Hussein Obama from Republicans is not over weak policies, but supposedly over race;[21] such a notion has been thoroughly discredited.

Occupy Democrats falsely claimed that Republicans have supposedly ignored COVID-19.[22] The far-left hate group has also shared[23] outrageous claims alleging that the Republican-led Senate supposedly avoided passing coronavirus relief, when they have made efforts that were unsurprisingly blocked by hyper-partisan Democrats.[24]

Occupy Democrats fervently praised RINO Susan Collins until she voted in favor of confirming Brett Kavanaugh, when at that point they displayed meltdowns over the vote; after continuously attacking her since, they suddenly turned around once again to praise Collins when she announced her opposition to filling the Supreme Court vacancy before the 2020 elections.[25][26][27]

Despite previously trashing Laura Ingraham,[28][29] the group was none too quick to appear to praise her after she parroted Democrat fake news.[30]

As typical with liberal hypocrisy, Occupy Democrats decides to change standards between those they like and don't like. The group initially denounced Republican rebukes of the Dixie Chicks as "oppression", then denounced Republican opposition to Obama as "treason", and later encouraged any means to stop Donald Trump from being re-elected.[31][32]

Despite having repeatedly attacked Trump rallies nonstop over coronavirus concerns, Occupy Democrats praised a large group of leftists for gathering (without socially distancing) to protest Trump.[33]

Occupy Democrats whines over caravans of Trump supporters blocking traffic yet never criticizes BLM/Antifa for doing the same,[34] notwithstanding the difference that the former are peaceful while the latter are extremely violent.

The group falsely claims that Donald Trump is responsible for a high number of COVID-19 deaths in the United States while praising New York governor Andrew Cuomo,[35] who is directly responsible for thousands of coronavirus-related nursing home deaths in New York.[36]