MSNBC (stylized msnbc, short for Microsoft National Broadcasting Company, although the full form of the acronym is never used on-air) is a liberal propaganda 24-hour cable "news" channel and website aligned with the Democrat Party. Owned by Comcast, MSNBC is considered by many to be one of the most liberal cable news channels of all the mainstream media. For years, MSNBC trailed Fox News and CNN in the ratings. However, it began beating CNN after the ratings for that network began to freefall.[1] In 2014 CNN beat MSNBC.[2] MSNBC typically garners ratings that are just one-third those of the Fox News Channel. Some consider it to be the liberal counterpart to the conservative Fox News. In 2012, Microsoft fully divested itself from MSNBC resulting in the creation of NBC News and NBCnews.com.[3] It is possible Microsoft divested due to MSNBC's liberal hypocrisy since they opined that "we wanted to show different perspectives." The "Lean Forward" campaign MSNBC announced blatantly confirmed what was already assumed in that the network has a strong liberal bias. Sean Hannity refers to the network as "MSDNC".

The Daily Caller observed that MSNBC "might be trying a little too hard to push" its agenda ("MSNBC duped: Network runs satirical fake news"), and that wasn't the first time.[4] MSNBC is pro-recession and job destruction.[5]

MSNBC is blatantly Communist. One of their anchors, Melissa Harris-Perry, was featured in an MSNBC promotional video explaining that children "belong to whole communities" instead of their parents.[6] The promo is part of the Marxist "Forward" (MSNBC refers to it as "Lean Forward") campaign that has been going on since the late 19th century.[7]

MSNBC adopted the slogan "lean forward" which appears onscreen, which proves that the network decided to stop hiding their blatant liberal and Communist bias from viewers. 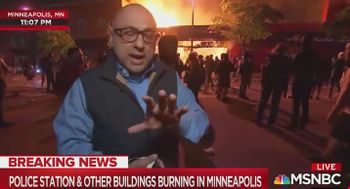 While buildings burned behind him, Ali Velshi of MSNBC reported with a straight face that leftist "protests" were "not generally speaking unruly."[8]

The MSNBC channel was started in 1996 as a joint venture between Microsoft and NBC. On December 23, 2005, ending a partnership that had soured long before, Microsoft and NBC announced that they would dissolve their joint ownership of the cable news channel, with NBC taking control. NBC completed a deal to assume majority control of the channel, with an 82% stake.[9] The joint venture with Microsoft has come to an end.[10]

On January 28, 2011 Comcast, America's largest cable operator, purchased NBCUniversal, which includes MSNBC, from former parent company General Electric.[11][12][13] Comcast acquired a 51-percent stake in NBCUniversal, creating a $30-billion business that would include broadcast, cable networks, movie studios and theme parks.[14] Some liberals feared that Comcast might turn into a more conservative outlet, but this has not happened.[15][16] Some critics and supporters of Keith Olbermann blame Comcast for his firing from MSNBC. In addition, on July 2012, Microsoft also dropped MSNBC from its ownership, although it was still allowed to retain the name.[17][18]

The MSNBC network has perennially had very low ratings. In 2002, the network was regularly beaten in the ratings by CNN Headline News. The CEO of Microsoft once even admitted that he wouldn't have started MSNBC knowing what he knew later.[19] In June 2006, CNN co-founder Reese Schoenfeld told journalist Don Kaplan that "Everybody compares MSNBC to Fox and CNN - when its real competition is Headline News". Schoenfeld pointed out that the ratings for MSNBC and Headline News are roughly the same, about 300,000 viewers on average and that "by comparison, Fox and CNN regularly average three or four times as many viewers." Kaplan even joked that "the running joke in TV news is Fox and CNN are news channels with websites, but MSNBC is a website with a cable channel".[20]

Shock jock Don Imus's radio show Imus in the Morning was simulcast on MSNBC for over ten years. During this time, the program become well known for displaying offensive commentary. However, MSNBC continued to support the show. In April 2007, the network sparked outrage when during a broadcast of Imus in the Morning, Don Imus and another MSNBC staff member made remarks about the Rutgers University women's basketball team, considered to be both racist and sexist. Initially, MSNBC refused to cancel the show. After sponsors started withdrawing their advertisements from the show, MSNBC canceled the simulcast of Imus in the Morning.

During the national emergency over the Chinese COVID-19 pandemic, while thousands were being diagnosed and hundreds dying daily from the deadly disease, MSNBC refused to carry public information programming alerting the public to the danger with precautionary instructions on prevention and transmission of the deadly virus.[21] In so doing, MSNBC has also become a blatant and willing propaganda vector and apologist for the Chinese Communist Party in its COVID-19 coverage,[22] while one of its correspondents, liberal author Sarah Kendzior, put her TDS on public display by libeling the Trump administration and engaging in projection (by calling it a "crime cult", a descriptor actually more befitting of the Democrat Party based on its history) and by falsely accusing it of "...(wanting) people to die, and they want many more to die"[23] (which actually describes the behavior of various Democrat state governors and city mayors, particularly including New York governor Andrew Cuomo[24][25] and New York City mayor Bill de Blasio,[26][27] as well as the Democrats themselves, in their own mishandling of the COVID-19 pandemic[28]).

Trump lawyers demand a retraction and public apology for a Trump-Russia collusion smear after the Mueller Report; within two hours NBC complied.

Publicly, the channel claims to be a non-biased, journalist driven news network. In reality, they are Democrat-aligned to the point that they were perceived as the press Secretary for the Obama Administration. On several occasions, Obama Administration officials have stated their public support for MSNBC.

Opinion-driven news is common and a successful formula at Fox News. MSNBC opinion news includes attacking Republicans relentlessly (and with no factual basis) and promoting or whitewashing Democrat politicians. Their remarks are so outlandish, choke-full of proven lies and mean spirited that their TV hosts often get suspended from the air.

MSNBC recently canceled some shows including the longtime Ed Show featuring Ed Schultz to favor "hard news" and "journalism" but it is a PR move as the network still features a heavy leftist slant.

MSNBC has been criticized regarding the channel's liberal slant. The media watchdog group the Media Research Center[30] has cited MSNBC shows by Keith Olbermann, Dan Abrams and Chris Matthews in its criticism of the network's biased reporting. Among the network's daily lineup, liberals include Matthews, Rachel Maddow, Melissa Harris-Perry, Lawrence O'Donnell, and Chris Hayes. Joe Scarborough, a liberal-leaning RINO Republican who was a member of the United States House of Representatives from Florida, is purported to be the sole conservative voice with a show on the network. Having several liberals and one RINO is clearly not balanced.

Olbermann has denounced President Bush and the Republican Party, calling the latter a "terrorist organization". He has called on President Bush and Vice President Cheney to resign.[31] Olbermann has conducted post-debate interviews of Republican presidential candidates and led live coverage of presidential primaries. In the February 2008 issue of Men's Journal magazine, a senior executive at MSNBC stated that Olbermann "runs MSNBC" and that "because of his success, he's in charge" of the network.[32] Olbermann has since left the network and returned to sports journalism at ESPN

The left-wing advocacy group Media Matters for America[33] has criticized the MSNBC's commitment to promoting a left-wing agenda since the channel has had shows hosted by left-libertarian Tucker Carlson and former moderate Republican Congressman Joe Scarborough. Ironically, on August 16, 2007, Scarborough revealed an incident in which people in the MSNBC newsroom ceaselessly booed President Bush during a State of the Union address.[34]

In the past, MSNBC shows have featured Mitch Albom, Ann Coulter, Phil Donahue, Bill Moyers, Maury Povich, and Michael Savage, among others. That varied programming was gradually reduced as MSNBC veered more leftist in its point-of-view. Among MSNBC's 2008 lineup, Patrick Buchanan was perhaps the most conservative voice.

In 2003, in an apparent effort to appear more balanced, MSNBC fired talk-show host Phil Donahue. An internal memo read, in part, "Donahue represents a difficult public face for NBC in a time of war. At the same time, our competitors are waving the flag at every opportunity." [35] [36] [37]

On November 5, 2007, the New York Times reported that the cable news channel was in serious discussions with Rosie O'Donnell to have a prime-time show on the network. Under one scenario, O'Donnell would be given the 9 p.m. slot where she would compete with Larry King Live on CNN and Hannity & Colmes on the Fox News Channel. Her show would replace Live with Dan Abrams, a low-rated program that only recently replaced Scarborough Country.[38] The deal later fell through as O'Donnell leaked information about the agreement without MSNBC's permission.

Later in November 2007, the president of MSNBC, Phil Griffin, flat out admitted that the network has a left-wing liberal bias. In a New York Times article, he said that "it happened naturally" and that "there is a Go for it" mentality when it comes to pushing the liberal agenda among the MSNBC staff.[39]

Continuing its offensive against the Bush administration and its reposition as a left-wing "news" outlet, in December 2007, the network ran a series titled Bush League Justice with the explicit purpose of attacking the U.S. Justice Department under the presidency of George W. Bush.

In October 2010, MSNBC has publicly acknowledged its liberalism in October 2010 while launching a marketing campaign with the tagline "Lean Forward," [40][41][42][43] following several years in which many observers noted a leftward shift in the channel's programming.[44][45][46] As a result, NBC Universal and Microsoft is considering changing the name of the less partisan msnbc.com, a separate news company, to prevent confusion with the liberal TV network, MSNBC.[47] Some of the NBC News correspondents and producers, who attempt to be straightforward reporters, say they are embarrassed to be associated with the liberal cable outlet and fear being “tainted” by association with it.[48] The situation became more apparent when NBC News decided to keep Brian Williams and Tom Brokaw away from MSNBC during the November 2, 2010 midterm election coverage.[49]

In July 2013, former MSNBC senior producer Jeff Cohen attacked MSNBC for being what he called the “official network of the Obama White House.” [50]

During coverage of the Gulf Oil Spill, Democrat party apparatchik Mika Brzezinski, who is also an anchor of the MSNBC show Morning Joe, worked with the White House to distribute propaganda falsely claiming that Obama was doing an effective job managing the problem. Brzezinski, who is the daughter of NSA Zbigniew Brzezinski from the failed Carter administration, admitted on the air that "I have a file that I've been working on with the White House."[53]

In July 2020 MSNBC producer Ariana Pekary quit, calling the network fake news and a cancer that risks human lives, even in the middle of a pandemic. Pekary said President Trump became the primary focus of the coronavirus coverage instead of “science itself.” “As new details have become available about antibodies, a vaccine, or how COVID actually spreads, producers still want to focus on the politics. Important facts or studies get buried,” she wrote in her resignation letter.[56]

MSNBC aided Mayor Pete Buttigieg based on his white privilege when the racist reporting at MSNBC consistently snubbed Andrew Yang, an Asian American, to help Buttigieg surge in early 2020 presidential primary polling of Iowa.[57][58] During the pre-primary debates, MSNBC cut off Yang's microphone.[59]

Joy Reid is a Leftwing conspiracy theorist and commentator for MSNBC. Reid has been cited for racist, homophobic, Islamophobic,[64] xenophobic and bigoted comments.[65][66]