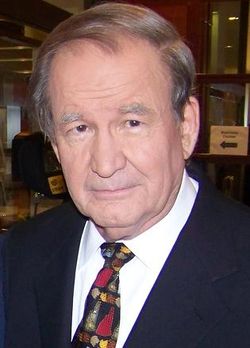 Patrick Joseph "Pat" Buchanan is a noted paleoconservative commentator, author, and three-time candidate for President of the United States. He was employed as a commentator at MSNBC until he was permanently suspended from there in February 2012, after which he became a commentator at Fox News. He was one of the first to identify the threats caused by the declining population and exploding immigrant populations in Europe.[1]

Pat Buchanan was born on November 2, 1938, in Washington, D.C. to Catherine and William Buchanan. His sister, Bay Buchanan, served as U.S. Treasurer under the Reagan Administration. He is a lifelong Roman Catholic.

At age 23 he was hired by the St. Louis Globe-Democrat as an editorial writer. He was a supporter of the Barry Goldwater campaign for President in 1964.

In 1965, Buchanan was hired by the law firm of Richard Nixon, and the next year, as a researcher for the pending 1968 Nixon presidential campaign. He was on board for the entire Nixon campaign and ensuing administration and grew personally close to Nixon. He was a speechwriter and White House special assistant. He continued in that capacity for the early months of the interim Gerald Ford administration. It was Buchanan who first created the phrase "the great silent majority."[2]

Buchanan also served as White House Communications Director during the Ronald Reagan administration, from 1985 to 1987.

Buchanan has run for President three times. In 1992, he sought the Republican Party nomination against then-President George H.W. Bush. Many conservatives were alienated from the first Bush administration's policies, especially his reneging on his "read my lips, no new taxes" pledge and his frequent use of the term, "New World Order" to describe his foreign policy goals. Buchanan offered conservatives who were disillusioned by the Bush Administration a choice in the 1992 primaries. Buchanan came in a distant second in the primaries but is remembered for his fiery keynote speech at the 1992 Republican convention.

In 1996, Buchanan sought the Republican nomination again and pulled an upset victory in the New Hampshire primary. However, after Bob Dole emerged as the clear favorite after the Super Tuesday primaries, Buchanan suspended his campaign.

In 2000, Buchanan left the Republican Party and announced his intention to seek the Reform Party nomination for President. He easily won the Reform Party nomination over his main rival for the nomination, John Hagelin, but carried only about 1/4 of 1% of the votes in the general election, coming in fourth place behind George W. Bush, Al Gore, and Ralph Nader. Ironically, however, the placement of his name on the butterfly ballot in Palm Beach County, Florida, probably provided George W. Bush with his margin of victory due to Democratic voters mistakenly selecting Pat Buchanan.

Buchanan supported the successful presidential campaign of Donald Trump, who ran on the same views that Buchanan had run on 20 years earlier.[2] Despite being advanced in age, Buchanan continued to be very mentally competent.[2]

Since the end of the Cold War, Pat Buchanan has been largely identified with the paleoconservative wing of the conservative movement. As such he is an opponent of free trade, a critic of mass immigration, and a critic of foreign policy interventionism such as the Iraq War, positions which put him at odds with the neoconservatives.

Buchanan criticized President Trump for his air strikes against Syrian dictator Bashar al-Assad, seeing it as a sign of the administration's abandonment of its America First foreign policy and its caving to neoconservatism.[3] He is a supporter of Russia´s president Vladimir Putin.[4]

Buchanan is the author of:

He is also a co-founder and founding editor of The American Conservative magazine.