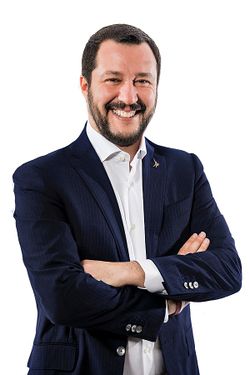 Matteo Salvini (born March 9, 1973[1]) is a Italian politician is the leader of Lega Nord and who served as his country's Interior Minister and Deputy Prime Minister. Salvini holds strong national conservative views.

Salvini was born on March 9, 1973, in Milan.[1] While originally having communist leanings, Salvini moved politically to the Right as time went on.[2] Prior to becoming the federal secretary of Lega Nord, Salvini served in several positions, including in the Milan City Council, the Italian parliament, and the European Parliament.[1] As Lega Nord's leader, he expanded the party's appeal outside Northern Italy, even renaming the party to "The League".[3][4] While Lega Nord was in serious trouble when he became party leader in 2013, Salvini significantly grew the party to become the country's dominant political force by 2018 through focusing on a nationalist and populist agenda similar to that of U.S. President Donald Trump.[5]

Salvini is known for his effective use of social media.[6]

In the 2018 general election, The League made massive gains, quadrupling its vote share. It performed so well that it became the dominant party in its coalition,[7] and Salvini had a very real chance of becoming Italy's prime minister.[8] Ultimately, Salvini became Italy's interior minister – giving him control over the country's immigration policy – as well as its deputy prime minister under a coalition government with the anti-establishment Five Star Movement.[9]

Salvini immediately went to work advancing his conservative immigration agenda as Italy's interior minister, visiting an immigration camp in Sicily soon after being sworn in.[10] Shortly afterward, he released his three-point immigration plan, which involved building more repatriation centers, reducing illegal immigration, and increasing deportations.[11] Salvini showed he was serious about securing Italy's borders by refusing to let a boat carrying over 600 migrants land in the country due to it sharing an undue immigration burden,[12] and he said he would continue such actions.[13] In July 2018, Salvini blocked a private Italian ship carrying migrants from docking.[14] By the end of 2018, migrant ships stopped their activities because of Italian pressure.[15] Overall, Salvini was able to advance his conservative agenda.[16] By July 2018, he was Italy's most trusted politician, based on polling data.[17] Through his conservative policies, Salvini promoted traditional Christian values.[18]

Among other actions, Salvini pushed to strengthen Italy's self-defense laws to allow citizens to defend their homes from intruders.[19] He ordered that benefits for asylum seekers be massively reduced.[20] In August 2018, he would change identification forms to list one's "mother" and "father", rather than "parent one" and "parent two."[21] In September 2018, Salvini signed a decree which, among other actions, would ban residency permits for humanitarian reasons, increase funding for deportation centers, and removed citizenship from terrorists.[22] Salvini also took steps to expand the deportation of illegal migrants.[23] He announced in November 2018 that the coalition government would not sign the UN Global Compact on Migration.[24] In 2018, illegal sea landings fell 80%, with Salvini's policies likely affecting that figure,[25] and migrant deportations increased 28% in Salvini's first six months in power.[26] As illegal immigration to Italy significantly fell, it doubled for Spain.[27] Migration levels continued to dramatically fall,[28] something confirmed by Frontex data.[29] In May 2019, Salvini planned a decree to fine migrant boats €5,500 for each migrant they transport to Italy,[30] and the following month, he formally issued the decree which also included measures protecting the police.[31] Notably, Salvini began enforcing the law immediately after coming into force, countering a left-wing German migrant captain's attempts to abet illegal immigration to Italy.[32] Because of funding cuts on pro-migrant organizations that Salvini enacted, those organizations laid off thousands of workers.[33] In July 2019, Salvini closed what had been the largest migrant center in Europe.[34]

Even the M5S's founder and former League opponent, Beppe Grillo, praised Salvini for his tough stance on migrants.[35]

Salvini and the League promoted gun rights as interior minister,[36][37] and in March 2019, the Italian legislature passed a self-defense law he supported.[38] He took a confrontational stance toward the European Union.[39] In April 2019, Salvini announced he would increase police oversight of Islamic cultural centers.[40] Helped by Italy's Supreme Court, Salvini worked to strengthen regulations against cannabis in Italy.[41]

Under Salvini's leadership, crime levels fell an average of 15% from 2018 to 2019.[42] In July 2019, Italy began increased border security patrols along its border with Slovenia because of increased illegal immigration levels.[43] Salvini worked to evict migrant illegally living in abandoned buildings.[44]

In the May 2019 European Parliament elections, which Salvini put much effort into, the League performed very strongly, becoming the largest party in Italy with over 34% of the vote and one of the largest parties in the parliament.[45] The League performed particularly well in small towns and areas most affected by the migrant crisis.[46] Salvini launched a European Parliament group Identity and Democracy.[47]

On August 8, 2018, Salvini called for new elections due to significant policy disagreements with the more liberal M5S.[48] His pulling out of the coalition backfired, with the M5S agreeing to pursue an alliance with the far-left Italian Democratic Party.[49] Conte announced the leftist cabinet on September 4, 2019, and they were sworn in the following day, ending Salvini's tenure in the government.[50]

The new Democrat–M5S coalition began reinstating status-quo, open borders immigration policies,[51] and Salvini and the League strongly criticized the new coalition and its globalist policies.[52] Salvini also became Italy's most trusted political leader.[53] On October 27, 2019, the League secured a historic election victory in the Italian region of Umbria, taking control of the state which had previously been only controlled by center-left, left-wing, and far-left parties.[54] Salvini is a Euroskeptic[55] who also supported leaving the Euro[56] and who opposes Turkish membership in the EU.[57] He supports putting the Italian people first when making policy, as opposed to advancing globalist ideals.[58] As Deputy Prime Minister, he has called for remaining in the EU and changing it from the inside.[59] He is also a critic of compulsory vaccination,[60] and he has criticized the concept of surrogate motherhood as a threat to the traditional family.[61] Salvini takes relatively conservative positions on social issues and supports the pro-family World Congress of Families.[62] Salvini takes tough-on-crime positions and, along with other members of the League, supports the chemical castration of rapists.[63]

Salvini also takes a strong position against mass migration and Islam,[64] and he supports strong border security actions.[56][65] He has called for supporting Italian families and increasing the native birthrate rather than supporting migrants.[66] He also supports enacting tariffs on foreign products.[67] A strong supporter of Donald Trump,[68] Salvini met him in 2016 while Trump was still a presidential candidate.[69] When President Trump decided to move the US embassy from Tel Aviv to Jerusalem, Salvini stated that he is in favor of recognizing Jerusalem as the capital of Israel,[70] and he is a supporter of Israel in general.[71] Salvini also has formed alliances with Marine Le Pen in France and Geert Wilders in the Netherlands,[7][72] and he has expressed a desire for creating a Europe-wide coalition of patriotic parties.[73] Salvini also has a strong relationship with Viktor Orbán of Hungary,[74] who complimented his policies' effects,[75] and he has similar views as Poland's Jarosław Kaczyński.[76] Salvini takes a relatively positive stance toward Brexit and has criticized the EU for its stance against the UK.[77] He has criticized liberal globalists, including Angela Merkel, Emmanuel Macron, and the EU's leadership for their policies.[78] Because of Salvini's criticisms, along with those from other Italian leaders, France recalled its ambassador to Italy in February 2019.[79]

Unlike other Italian politicians, Salvini is not afraid of mixing his Christian profession with his politics.[82]