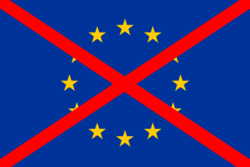 Euroskepticism (also spelled "Euroscepticism") refers to the political philosophy opposed to the European Union and its increasingly centralized, federalist, and socialist powers. Most Euroskeptics are conservative, libertarian, and populist, although some people on the Left also held to their own version of Euroskepticism. Adherents of Euroskepticism are known as Euroskeptics. Globalists and supporters of a completely federalized European country oppose Euroskeptics.

The Eurozone Crisis and the European migrant crisis are among the factors attributed to the growth of Euroskepticism. Euroskepticism is contrasted by Europhiles, who support further European integration.

Euroskepticism has its roots in the political and economic unification and integration of the European Union.[1]

One could see Euroskepticism in action in the 1990s, when the Maastricht Treaty was being adopted by EU nations.[1] Denmark rejected the treaty, and France barely approved it.[1] Additionally, Switzerland rejected joining the European Economic Area in 1992,[2][3] and Norway rejected a referendum to join the EU.[1] Many Euroskeptic parties grew during this period.[1] A new wave of Euroskepticism[4] resulted from the Eurozone Crisis, which began in 2009, and the European migrant crisis, which began a few years later. Euroskeptic parties performed strongly in the 2014 European parliament elections,[5][6][7][8] with such parties in the United Kingdom,[9] France,[10] and Denmark[11] gaining the most seats in their respective countries. This Euroskepticism came despite the EU spending nearly $1 trillion on public works projects throughout its member states in order to unify the continent.[12]

In the 2015 Swiss federal elections, the Swiss People's Party received 29.4 percent of the vote and 65 seats in the 200-seat National Council, a record amount for the party.[13][14] No Swiss political party had exceeded the SVP's share of the vote in at least a century, and no party received more seats in the National Council since 1963, when the number of seats was established at 200.[13]

In May 2015 Polish presidential election, conservative and Euroskeptic challenger Andrzej Duda of the moderately-Euroskeptic Law and Justice (PiS) won in an upset, defeating the pro-EU incumbent.[15][16] In the October 2015 general election, PiS won in a landslide,[17] becoming the first Polish party to win enough votes to govern the country alone since the fall of communism in 1989.[18][19] This landslide election frightened Europeanist leaders and politicians.[20]

In the first round of the 2016 Austrian presidential election, Freedom Party of Austria candidate Norbert Hofer received 35.1 percent of the vote, which at the time was the party's best result in a national election in history.[21] Hofer lost the run-off election by less than one percentage point,[22] and again received a relatively large percentage for a Euroskeptic party in a rerun later that year.[23] The Freedom Party of Austria surged in the 2017 legislative elections, and while it received third place,[24][25] it successfully shifted the establishment Austrian People's Party to the Right on issues such as immigration.[26][27]

In the 2017 Dutch general election, the Party for Freedom became the second strongest party by receiving its best result ever.

French National Front candidate Marine Le Pen received second place in the first round of the 2017 French election on April 23 with over 21% of the vote, meaning she advanced to the second round to face liberal globalist candidate Emmanuel Macron.[29][30][31] Le Pen lost the election with just under 34% of the vote, the election was a victory for her in a sense as it showed that she, her party, and their ideas had entered and were influencing the French mainstream.[32] Soon after the election, it was revealed that even if Le Pen had won, the liberal elite in France would have taken steps to keep her from actually welding power.[33]

While the AfD was unable to gain any seats in the German national parliament in the 2013 election, it entered the Bundestag in the 2017 election after taking a historic third place with nearly 13% of the vote, while Angela Merkel's CDU received its worst result since 1949.[34] Despite this, Merkel continued defending her open borders policies.[35]

The 2017 Czech parliamentary election resulted in major gains for Euroskeptic and anti-establishment parties and major losses for the Left.[36][37] At first place was the populist ANO, led by Andrej Babis,[38] who has been compared to U.S. President Donald Trump and has criticized the European Union and immigration.[39] The Freedom and Direct Democracy (SPD) party, a new and solidly right-wing and Euroskeptic party, reached a close 4th place, exceeding expectations.[40] The three Euroskeptic and right-wing parties that won seats, the ANO, ODS, and SPD, won a combined 51.6% of the popular vote,[41] while the Social Democratic Party won its worst-ever result, at 7.27%, and the Communist Party also saw massive losses, winning only 7.76%.[36][41]

In Italy's 2018 general election, populist and Euroskeptic parties received over 50% of the vote, and the Five Star Movement and Lega Nord formed Western Europe's first fully populist and anti-establishment government.[42]

Among other elections in 2018 and 2019, Euroskeptic parties performed strongly in the 2019 European Parliament election, coming in first place in several countries and significantly increasing their size in several more countries.[43]

Euroskeptics saw several other electoral victories in the 2010s.[44]

Results of the 2015 Swiss federal election in October 2015. Each canton is shaded according to the party that won the most votes for the National Council (lower house). The Euroskeptic Swiss People's Party is shaded dark green, and it won the largest popular victory for a Swiss political party in at least a century.

The following is a non-exhaustive list of European political parties that advocate for Euroskeptic policies: Nigel Farage, a prominent Euroskeptic, in 2008