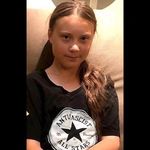 Greta Thunberg (born January 3, 2003) is a left-wing Swedish climate activist/alarmist who started the "school strike" movement. She is a white privileged tool of wealthy liberal elites who use climate change advocacy to advance their political agenda[1] – she has admitted that "climate change" involves many more topics than just the environment.[2] Her activism began as a result of her mental disorders, as admitted by her father.[3] Participants take Fridays off school to protest against the alleged failure of governments to tackle the alleged problem of man-made "global warming". Thunberg has acquired a cult-like following and is regarded by some far-leftists as a prophet.[4][5] While she sailed from Europe to the United States to prove her support for an eco-friendly lifestyle, her team flew to the U.S.[6] She and other climate change alarmists have been angrier at other countries than the largest polluter on the planet, China.[7] Additionally, Thunberg is so radical and far-left that she attacked left-wing France, led by globalist environmentalist Emmanuel Macron, for not doing enough to advance environmentalism.[8] She has made false and inappropriate statements for which she was forced to apologize.[9]

Climate activist and shaman Jake Angeli at the Arizona Climate March in 2019. In 2021, Angeli led the occupation of the U.S. Capitol building.[10] The reference to Ragnarok in the lower left hand is a doomsday scenario of the Nordic gods often cited by white supremacists.[11]

In its article on Thunberg, Wikipedia has responded to criticism of her, her activism and her influence over easily impressionable children (particularly by encouraging them to engage in truancy from school for the sake of supporting climate alarmism) by using her age and her various psychological disorders (she is said to have autism, Asperger's syndrome, obsessive-compulsive disorder and selective mutism) as shields against criticism, claiming that her detractors have "launched personal attacks" and "increasingly rely on ad hominem attacks" and refer to them as "climate change deniers" in an attempt to discredit their criticism, but their attacks on Thunberg's critics hypocritically rely on racist and sexist ad hominem attacks themselves, as well as heavy use of highly questionable data and anecdotes from non-credible liberal-biased sources such as The Guardian, Scientific American, the New York Times and Vox Media.

On September 23, 2019, Greta Thunberg gave an address to the United Nations in which she referenced a "mass extinction" caused by "global warming", and told world leaders, "How dare you!" for continuing to burn carbon and failing to prevent a fictitious impending "apocalypse". The neoconservative Sky News was one of the few networks[12][13][14][15] to fairly cover Thunberg's U.N. address.[16][17][18][19] Climate crisis marches were held globally, and Thunborg led the Manhattan march.[20] In Arizona, climate crisis advocate and shamanist Jake Angeli made local headlines in support if the march.[21] In January 2021, Angeli led the assault on the U.S. Capitol building and sat in the chair of the presiding officer during the electoral college certification of Joe Biden.[22]

Liberals have idolized Thunberg. For example, the theologically liberal Church of Sweden labeled her a successor of Jesus Christ.[23] With the media and left-wing activists using her to advance their agenda, Time Magazine named Thunberg Person of the Year in 2019.[24][25]

Thunberg has been accused of not speaking her own mind in her speeches, but being used as a mouthpiece by her unscrupulous handlers for their fraudulent politically-motivated "climate change" agenda and reading from scripts prepared for her by them. She does not appear to do well in her speeches when she either goes off-script or does not have a script to read from,[26] and she and her handlers also appear not to handle adversity (including opposition to their agenda, or hard questions about said agenda or about Thunberg herself) very well either; when she was confronted with tough questions from Rebel News reporter Keean Bexte during a tour stop in Edmonton, Alberta, Thunberg gave claims contradictory to public statements she made and refused to answer other questions before one of her handlers cut off questioning and whisked her away while threatening to sic the police on Bexte,[27] while her Edmonton "climate march" rally was confronted by a Rebel News-sponsored billboard truck challenging the viewpoints being funneled through Thunberg by her handlers, as well as by counter-protesters supporting the oil industry, who voiced opposition to the rally and its racist and anti-capitalist Marxist supporters.[28]

In March Thunberg announced she may have contracted the ChiCom flu as a result of her globetrotting activities.[29]