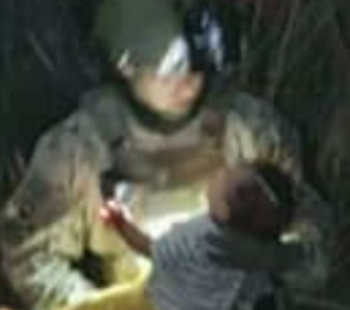 After Biden invited a surge in illegal immigration, human traffickers tossed a 3-year-old toddler over a 14-foot border wall, abandoning her in the middle of the night.[1]

The Biden border crisis began on junta leader Joe Biden's second day occupying the White House when he issued an executive order diktat which has been described as the most extreme directive in the history of modern law enforcement.

Acting Secretary David Pekoske issued a memorandum on the evening of January 20, 2021 putting into place a 100-day deportation moratorium. There were narrow exceptions for terrorists and spies and none for criminals and criminal suspects. The order essentially shut down ICE operations. The junta's executive order raised the refugee ceiling by 730% in the midst of the Covid pandemic.[2][3] By the junta's seventh week Arizona border agents reported illegal immigration in 2021 already surpassed all of 2018, and was on track to surpass 2018, 2019 and 2020 combined.”

It is estimated that about 12,000 criminal illegal aliens per month will not be deported from the United States throughout the existence of the Biden/Harris regime.[4] These illegals can vote unchallenged under the Democrats "For the People Act".[5] Biden also canceled the Trump era Operation Talon which focused on deporting illegal child sex traffickers and sexual predators.[6]

An estimated 117,000 migrants crossed the border at the going rate for smuggling humans of $10,000 each, totalling well over $1.1 billion for the cartels and human trafficking networks.[8] People from Yemen, Iran and Sri Lanka were crossing the border, as well as people on the terrorist watch list.[9] Democrat Reps. Vicente Gonzalez and Henry Cuellar criticized the junta's mishandling of the crisis.[10] Cuellar, whose district sits on the Mexican border where the Biden border crisis was occurring, advocated for the re-institution of President Donald Trump's Remain in Mexico program for asylum seekers.[11]

The developing situation at the U.S. - Mexico border prompted then former President Donald Trump to issue a formal statement in March 2021 regarding a so-called "National Disaster". Trump indicated in the statement, in part, "We proudly handed the Biden administration the most secure border in history. All they had to do was keep this smooth-running system on autopilot. Instead, in the span of just a few weeks, the Biden administration has turned a national triumph into a national disaster..." Trump further warned that the Biden administration's "reckless policies" were "enabling and encouraging crimes against humanity."[12]

People died attempting to cross the frigid waters of the Rio Grande after Biden's open invitation.[14] El Salvador President Nayib Bukele told Fox News the ‘new-liberal practice’ immigration policy was ‘immoral’ and 'not good for the US, not good for El Salvador, causing a brain drain and sending El Salvadore's future workforce to the U.S. in exchange for a tiny remittance.[15] Texas Gov. Greg Abbott told an NBC affiliate

After laughing at the unfolding human tragedy, Harris was appointed by Biden to head up a task force to look into the problem.[19] Harris is committed to a platform of Abolishing ICE and has referred to the men and women of the CBP as the Ku Klux Klan.[20] A week into the Harris' appointment as border czar, Harris had no immigration-related meetings on her schedule and made no public statements about the border crisis.[21] Symone Sanders, an African American woman who was relegated to a subordinate position in the White House propaganda apparatus, told the Associated Press, "The vice president is not doing the border."[22] The CBP was not doing any covid-19 testing on people apprehended at the border.[23] Pods designed to hold 80 people were stuffed with as many as 709 with no social distancing.[24] The Epoch Times: described conditions in the holding cells:

The National Sheriffs Association estimated that up to 50% of all illegal immigrants were covid positive.[26] Congressional Democrats blocked a Republican bill which would require the Department of Homeland Security to test all apprehensions for covid.[27] Restoration of the Obama era Catch and Release program led to the release of covid infected illegal aliens into American communities.[28]

While White House chief propagandist Jen Psaki denied a border crisis existed,[29] two-thirds of registered voters believe a crisis existed and blamed Biden for it.[30][31] The junta eventually was forced to dispatch FEMA to the border to assist with the humanitarian catastrophe caused by the surge in illegal border crossings.[32] The junta imposed a media blackout and gag order on Customs and Border Protection (CBP) employees to cover-up the unfolding crisis and human tragedy. According to a CBS News report, non-profit lawyers who conduct oversight of migrant detention facilities have been impeded from going inside or even seeing photos of the conditions.[33] Award-winning photojournalist John Moore of Getty observed, “There’s no modern precedent for a full physical ban on media access to CBP border operations.”[34] CNN's Jake Tapper said the Biden-Harris junta was “not leveling with the American people.”[35]

Sen. Ted Cruz was blocked by junta personnel and accomplices from exposing to the American people the humanitarian disaster the Democrats created.[37] In his first public press conference Biden found it flattering that he was credited for the chaos and human tragedy he created.[38][39] The Biden junta held children separated from their parents in cages.[40]

The junta renewed the Obama era program of locking migrant children in cages.[41] The New York Times reported the junta was holding 3250 kids in "jail-like facilities"[42] 38% longer than the law allows.[43] CNN reported that the Biden junta was holding at least 3,200 children - more than any previous record number - in facilities with only 500 beds.[44]

Reports indicated that human traffickers were purchasing children for $3200.[45][46] Drug cartels often recruit or kidnap migrants, hold them for ransom or murder them if their families don't comply with the operatives' demands.[47] Mexican President Andres Manuel Lopez Obrador expressed concern over the junta incentivizing human trafficing and organized crime.[48] Evidence at the border suggested children were being raped.[49]

According to CBS News, children were held in overcrowded conditions, and some were having to sleep on the floor and were going hungry. One immigration lawyer representing the children said there were kids who have only showered once in seven days and weren’t allowed to shower more often. The children were not allowed outdoors and complained of not seeing the sun in days. The Donna complex which is supposed to hold only 250 people held 1,800, or 729% of its pandemic era capacity. The migrants were not able to observe any social distancing because of the massive number of people.[50] CBS reported the number quickly ballooned to 13,000.[51]

The Washington Post reported “[y]oung people are waiting in cramped, austere holding cells with concrete floors and benches. Lights remain on 24 hours a day, agents say, and there are few places to play.” Paul Wise, a court-appointed immigration monitor, reported “significant overcrowding.” Democrat Sen. Chris Murphy said he “fought back tears” when a 13-year-old girl spoke of being separated from her grandmother.[52] NBC News reported that the junta issued a gag order refusing media access to the jail like facilitiies where children were being kept in cages.[53]

Biden also canceled the Trump era Operation Talon which focused on deporting illegal child sex traffickers and sexual predators.[55] The order essentially shut down ICE operations. An estimated 117,000 migrants crossed the border at the going rate for smuggling humans of $10,000 each, totalling well over $1.1 billion for the cartels and human trafficking networks.[56] Mexican President Andres Manuel Lopez Obrador expressed concern over the junta incentivizing human trafficing and organized crime.[57] Reports indicated that human traffickers were purchasing children for $3200.[58][59] Drug cartels often recruit or kidnap migrants, hold them for ransom or murder them if their families don't comply with the operatives' demands.[60]Evidence at the border suggested children were being raped.[61] @red_pill_latina said on Instagram,

During the Obama surge in illegal immigration a whistleblower told Sen. Chuck Grassley's office that 3,400 sponsors whom DHS placed children with had criminal histories including homicide, child molestation, sexual assault and human trafficking.[63] The Obama administration implemented a program of not doing background checks on people claiming to be sponsors of undocumented children.[64] Efforts by the government to locate many of the children and their sponsors later were unsuccessful.

Prior to the junta opening the border bi-partisan experts estimated the money made on drug trafficking by the Mexican Drug Cartels at around $500 billion, or one half-trillion dollars per year. Sen. Sonny Purdue said in 2019: “At half a trillion dollars — $500 billion — that makes the cartel business and the drug traffic just in Mexico alone coming across to the United States bigger than Walmart, to put it in perspective. So this is larger than our largest companies.” Democrat Sen. Dianne Feinstein quoted the same figure testifing, “The illicit drug trade is a business, valued at anywhere between $426 [billion] and $652 billion…”.[65]

Traffickers dropped a 3-year-old girl and a 5-year-old girl from a fourteen-foot border fence in the middle of the night, abandoning them.[67]

Over crowding caused a humanitarian crisis. The Biden/Harris regime set up a processing facility under a bridge in Texas requiring migrants of all ages, including children, to sleep on dirt.[68]

According to Democrat Rep. Henry Cuellar, the junta has taken the unprecedented step of releasing illegal aliens without a court date to appear.[69]

The U.S. Senate requested the General Accounting Office (GAO) to investigate the legality of Biden suspending border wall construction and freezing funding for it appropriated by Congress. Pointing to the surge of migrants and increase in border apprehensions, Senators argued that Biden’s actions “directly contributed to this unfortunate, yet entirely avoidable, scenario.” Following Biden's actions, “operational control of our southern border was compromised and a humanitarian and national security crisis has ensued." Biden’s moves were "also a blatant violation of federal law and infringe on Congress’s constitutional power.”