Rafael Edward Cruz, known as Ted Cruz (born December 22, 1970, in Calgary, Canada) is the junior United States Senator from Texas, having won the seat vacated by Kay Bailey Hutchison in 2012. A Republican, Cruz was a Solicitor General of Texas, the chief lawyer for the state before the U.S. Supreme Court.[1] Cruz supported the globalist Trade Promotion Authority (TPA, also known as "Fast Track").[2] Cruz attends the secret Koch brothers' meetings and advances their agenda without admitting to doing so.[3] He pandered to the Koch brothers by at first refusing to endorse Donald Trump for president.

Senator Cruz was the first candidate to announce for president in 2016, He formed multiple political organizations to support his candidacy prior to the official nomination of Trump in the summer of 2016. Cruz considers himself the political heir of Ronald Reagan.[4] Cruz initially refused during his televised address at the Republican National Convention in Cleveland, Ohio, to endorse Trump. He was loudly booed by the audience for his stance.[5] Eventually, Cruz did endorse Trump,[6] but not before becoming the recipient of anger and disdain from many for his hesitation.

Cruz's wife, Heidi, is an executive for Goldman Sachs and was on leave from that liberal investment bank during the campaign, where she played a dominant strategically and for defining policy positions and fundraising. Ted Cruz has sided with some feminist positions. Heidi has been a member of the globalist Council on Foreign Relations and was on the task force that recommended the leftist North American Union.[7][8] Reportedly neither Ted Cruz nor his wife donated anything to churches, including what they describe as their own church, from 2006 to 2010, the most recent time period Cruz has released.[9]

Cruz is promoted heavily by neocons who like his interventionist foreign policy, but some conservatives see more grandstanding than achievement on social issues. Many prominent neocon Cruz supporters later acquired positions in the Trump administration, and used those positions to sabotage his agenda from within. These people included Ezra Cohen-Watnick, Steve Bannon, and Mark Meadows. It is unknown what role -- if any -- Cruz himself played in said sabotage, but the fact that said saboteurs all supported him in 2016 cannot be ignored.

In prior elections, Cruz has been supported by the Tea Party movement, Tea Party Express, Club for Growth, FreedomWorks, Erick Erickson of RedState, Mark Levin, and former Alaska Governor Sarah Palin, but also by pro-homosexual donors as discussed below.

In the Texas Senate primary elections of May 29, 2012, Cruz finished second to Lieutenant Governor David Dewhurst, but the nine-candidate Republican field forced a run-off. On July 31, Cruz defeated Dewhurst in a second round of voting. Cruz easily defeated Democrat former State Representative Paul Sadler in the general election.

Cruz's father Rafael Bienvenido Cruz fought alongside Fidel Castro during the Cuban Revolution and was imprisoned three years later for his political activities. In 1957, he escaped to the United States. Today he is a pastor in Dallas.[10] Cruz's mother is an American. After Cruz's birth in Alberta, Canada, the family moved to Texas.

Cruz attended Princeton, at which he authored a senior thesis on the 9th and 10th Amendments to the United States Constitution, titled "Clipping the Wings of Angels".[11]

Cruz is a Southern Baptist, married with two children.

Cruz was elected as a member of the Senate in 2012. Beginning on September 24, 2013, Cruz gave a 21-hour speech on the Senate floor against Obamacare. The speech greatly boosted his national profile and led to denunciations from the liberal media.[13] His arguments at the time that once ObamaCare was fully implemented, it would be impossible to repeal it, were shown to be accurate when the GOP had serious trouble agreeing to a repeal-and-replace plan in 2017.[14]

In 2019, Cruz reached out to a far-left member of Congress Alexandria Ocasio-Cortez. Cruz indicated that he would be willing to work with Cortez to support a lifetime ban on former Members of Congress becoming lobbyists and passing a bill that would make birth control available over the counter.[15]

In 2021, Cruz called the second impeachment of President Donald Trump by the Democrat-controlled U.S. House vindictive and punitive, adding that Democrats seem obsessed with hatred for Trump.[16]

In December 2021, in a classic neocon move, Cruz stated that he was willing to approve Joe Biden's left-wing State Department nominees in exchange for Biden imposing more sanctions on Russia.[1]

The Texas Monthly ran a similar exposé entitled, "Ted Cruz's Gay Marriage Money." This article described how one of Cruz's donors has been:[22]

In April, the New York Times ran an article about the special fundraising meeting that Cruz had in Manhattan with homosexual potential donors: "At New York Reception, Ted Cruz Said to Strike Different Tone Toward Gays." 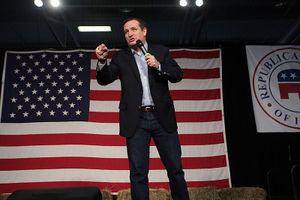 Cruz speaking at the Iowa GOP's Growth and Opportunity Party in Des Moines on October 31, 2015.

Ted Cruz recommended Judge Gregg Costa for nomination and confirmation to the U.S. Fifth Circuit Court of Appeals.[23] As a Senator from Texas, Cruz could have blocked the nomination. Instead, Cruz's support made it happen.

Within five months of his confirmation in May 2014, Judge Costa then voted in favor of rehearing Planned Parenthood's case in their attempt to reverse a Fifth Circuit's ruling that had upheld the pro-women, pro-life Texas House Bill 2, a good law that resulted in the closure of roughly half the abortion clinics in Texas. Judge Edith Jones and the majority of the Fifth Circuit outvoted Costa on the petition for rehearing en banc in Planned Parenthood of Greater Tex. Surgical Health Servs. v. Abbott.[24]

It was obvious prior to Ted Cruz's recommendation that Judge Costa was not pro-life. In one of his decisions as a United States district court judge in 2012, Judge Costa uncritically cited Roe v. Wade for a procedural point. Judge Costa had also been a Democrat volunteer in college in the 1990s.

On March 23, 2015, Cruz became the first person to announce his candidacy for the Republican nomination for president in 2016 in a speech before an audience at Liberty University.[25] The predictable liberal media immediately went on the offense claiming he has no chance but was in awe of his speech without teleprompters.[Citation Needed] His wife would take a leave of absence from her job at Goldman Sachs to join her husband on the campaign trail. This decision left his family without health insurance. Cruz, by law, has to be insured and took Obamacare coverage. This drove the media batty at the irony of railing against Obamacare but using it.[Citation Needed]

Cruz would raise $4 million in donations after the first week of his announcement. Liberal media jaws hit the floor when it was learned he raised $31 million in one week from PACs.[26]

The same liberals who mocked opponents of Obama for claiming he was not born in Hawaii have decided to make the same case against Cruz for being born in Canada. Cruz's mother being an American citizen (even though she voted in Canadian elections), just like Obama's mother, insures that he is American no matter what country he was born in. There are several differences in Obama/Cruz birth certificate controversies. Cruz released his immediately after it was requested. Obama held onto his for years, spending nearly $4 million in legal fees.[Citation Needed] Cruz renounced his Canadian citizenship on May 14, 2014.[27]

Cruz opposes illegal immigration,[28] gun control and homosexuality. He is pro-life,[29] supports the death penalty[30] and believes that the USA should not get involved in the Syrian Civil War.[31]

Cruz has criticized RINOs, calling them "squishes."[32] Others on the right argue that Cruz himself is a RINO,[33] while the left has admitted he would have been "worse than Trump" as president, due to his establishment conservatism.[34][35][36]

Showing his support for Taiwan over the communist and authoritarian People's Republic of China, Cruz met with the Taiwanese president in January 2017, along with Texas governor Greg Abbott, even after China sent a statement asking members of Congress not to do so.[37]

Border Patrol agents have spoken highly of Cruz for advocating for them and a secure border with Mexico.[38]

Despite voicing support for protecting American sovereignty, Cruz hypocritically supports NAFTA despite it being a threat to sovereignty.[39]

The New York Times has engaged in a scheme to keep Cruz's book off of its bestseller list.[40] At issue was the practice of some politicians to pre-purchase a large quantity of books for use by their campaigns with the hope that those purchases would place the books on the bestseller list for one week. The New York Times tries to exclude those bulk campaign purchases from the totals used to determine which books have the top sales. The question is whether the bestseller list shows what books the public buys rather than which books the politicians give away.

In his bid for a second term in the Senate in the November 6 general election, Cruz narrowly defeated the outgoing Democratic U.S. Representative Beto O'Rourke of El Paso by about two and one-half percent. Cruz received 50.89% of the vote and O'Rourke received 48.33%.[41] In the primary held on March 6, 2018, Cruz defeated four weak intra-party opponents. He polled 1,317,450 votes (85.3 percent). In the Democratic primary, O'Rourke received 641,337 votes (61.8 percent). Some 506,000 more Republicans voted in the Texas primary than did Democrats. The liberal O'Rourke, who unlike Cruz is not Hispanic, was believed to be a potentially strong opponent because of favorable media coverage, strong fund-raising, large crowds at campaign rallies, and respectable opinion polling. O'Rourke was said to resemble "a Kennedy," referring to the popular Massachusetts family of liberal politicians. In July, the magazine Politico declared that "Beto-mania" was sweeping Texas, an early warning to Senator Cruz that he could be unseated in a considerable "blue wave" across the Lone Star State.[42] The "blue wave in Texas toppled more than a dozen state legislators and two U.S. Representatives. It also produced Democratic sweeps in the large urban areas, particularly at the judicial level.

Texas Conservative Review, edited in Houston by Gary Polland, in August 2018 called upon Cruz to conduct a more active campaign than he had done thus far to retain his Senate seat:

…Conservatives are increasingly concerned about the fate of Senator Ted Cruz. The race is a critical one on the ballot. Cruz's opponent, left-wing Congressman O'Rourke is out-running Cruz, out-campaigning Cruz and out-personalizing Cruz. Where is the beef, we are asking what happened to making this race about Texas vs. California values? What happened to making the race about Cruz's mainstream values vs. O'Rourke's out-of-step leftist values? Where is the Ted Cruz we know and love from his campaign six years ago and from his campaign for President?


If O'Rourke is allowed to make this race about personality and showing up all over, Cruz will lose. Yes, he needs more money, but first, the fighter Ted Cruz needs to re-emerge now.[43]