Arizona on February 14, 1912 became the forty-eighth state to enter the union, and the last of the "lower 48" (contiguous) states to enter. It is known as the Grand Canyon State. Its capital and largest city is Phoenix.[1]

Arizona has always been politically conservative, but until 1952 the conservative Democrats were in control. Thanks to Barry Goldwater, Republicans built a strong base and controlled the electoral vote. In recent years, the state has gained population rapidly and the two parties are evenly matched.

The state Constitution of Arizona, like all of the other 50 states, acknowledges God or our Creator or the Sovereign Ruler of the Universe. It says:

We the people of the State of Arizona, grateful to Almighty God for our liberties, do ordain this Constitution.

Arizona has a large population of people of Native American descent. The Indian tribes who inhabited the land that is now Arizona include the Apache, Navajo, Mojave and Yavapai.[4]

In more recent years, the Republican Party has generally dominated Arizona politics and the state legislature. In 2004, President George W. Bush won the state's ten electoral votes by a margin of 10 percentage points with 55% of the vote, and in 2008 John McCain won the state with 54% of the vote. Republicans control both chambers of the state legislature. However, Arizona became the first U.S. state to vote against an anti-gay marriage amendment in the 2006 midterm elections. Arizona used to consistently be a solid red state in presidential elections. However, Democrats Kyrsten Sinema and Mark Kelly flipped Arizona's historically Republican senate seats in 2018 and 2020. Joe Biden also won the historic red state in 2020, the first Democrat to do so since Bill Clinton in 1996 and Harry Truman in 1948. There is currently an audit going on in Arizona for the 2020 election which is uncovering major voter fraud. 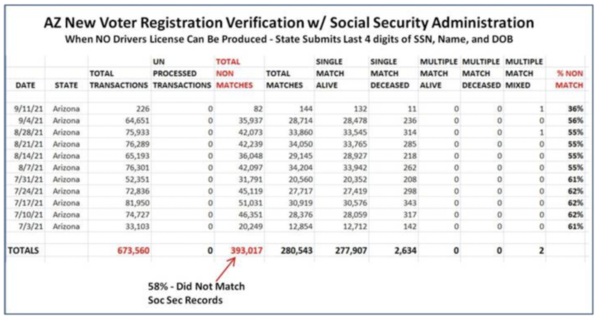 393,017 voter identities processed in Arizona for the 2020 presidential election did not match with the Social Security Administration.[5]

There was no proper signature validation of 1.9 million on mail in ballots.[7]

Over 75,000 absentee ballots were reported as unreturned when they were actually returned. These absentee ballots were then either lost or destroyed (consistent with allegations of Trump ballot destruction) and/or were replaced with blank ballots filled out by election workers or other third parties.[8]

In cases where ballots were too damaged or illegible to be read by vote tabulation machines, Novus software 6.0.0.0. was used in an attempt to cure or restore the ballots. The system would do so by trying to read the applicable scans of the original rejected ballots. However, as noted in a court “the software was highly inaccurate, and it often flipped the vote....the software would erroneously prefill ‘Biden’ twice as often as it did ‘Trump.’”[9]

Mail-in voters had up to 5 days to “cure” or “fix” invalid mail-in ballots sent prior to Election Day. In-person voters in Maricopa County had to deal with poll workers who did not know how to work electronic voting machines properly. This resulted in thousands of in-person votes being marked incorrectly, given provisional ballots, and disregarded rather than cured.

As a result of these violations, data experts estimate that more than 300,000 potentially fraudulent ballots may have influenced the outcome of the popular vote in the state, including more than 200,000 illegal ballots that were counted and about 75,000 legal votes that were not counted.[10]

Each Democrat party candidate was allotted 35,000 votes by rigged election machine before the voting started at 7 AM.

The Trump campaign and Republican National Committee filed a lawsuit that seeks the manual inspection of potentially thousands of in-person Election Day ballots in metro Phoenix that they allege were mishandled by poll workers and resulted in some ballot selections to be disregarded.

The legal challenge against Democrat Secretary of State Katie Hobbs centers on instances in which people are believed to have voted for more candidates than permitted.

When tabulators detect such an “overvote,” poll workers should give voters a choice to fix the problem, but the workers instead either pressed or told voters to press a button on the machine to override the error, leaving the devices to disregard the problematic ballot selections, according to the lawsuit.[11]

A Pima county whistleblower stated that Democratic Party members invited him to a meeting on September 10, 2020 and outlined a plan to add 35,000 votes to each Democrat candidate.

According to testimony from an MIT-trained mathematician, Biden may have received a weighted 130% total of Democrat votes in Maricopa County to help him win the state due to an algorithm programmed into the Dominion voting machines.[13]

The Maricopa County Election Management Systems databases were deleted after they were subpoenaed by the Arizona Senate.[14]

The Arizona audit of 2.1 million ballots from Maricopa County in the 2020 presidential election was authorized by the Arizona State Senate in February 2021.[15]

Former head of the Defense Intelligence Agency and National Security Advisor Gen. Michael T. Flynn warned of a false flag attack to divide Americans in advance of the audit results being made public.[16] Flynn warned,

Legislators from 20 states observed the audits.[19]