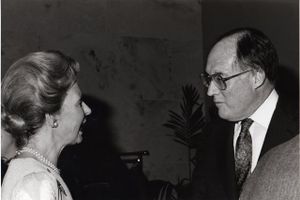 Justice Rehnquist with Phyllis Schlafly in the 1980s

William Hubbs Rehnquist (October 1, 1924 – September 3, 2005) was an Associate Justice of the U.S. Supreme Court (1972–1986) and its 16th Chief Justice (1986–2005). When he began he was the only conservative on the Court (really more of a contrarian than a conservative), and he led the Court increasingly to the conservative side until his death in office in 2005. Before he died he was likely responsible for the appointment to the Court of his protégé and former law clerk, John Roberts. Though a lifelong evangelical Lutheran,[1] Rehnquist received an extraordinary Catholic funeral after his death.[2] His trademark judicial philosophy was to restore and advance federalism, and was known as the "lone ranger" for his frequent solitary dissents which began nearly as soon as he was sworn in.

William Rehnquist, who had no prior experience as a judge, was a surprise appointment to the U.S. Supreme Court. He was one of many government legal advisors to President Richard Nixon, who was so unimpressed that he would mistakenly refer to him as "Renchburg."

After confirmation by the U.S. Senate, Rehnquist joined the Supreme Court on January 7, 1972. As was his style, within a mere two months later he wrote his first lone dissent, brazenly disagreeing with all the other Justices.

Rehnquist then earned his reputation for dissenting alone, for which he was called "the Lone Ranger." He penned more than 410 dissenting opinions over his career.

One of his early dissents, in 1973, was to a majority decision invalidating state laws allowing maintenance grants for nonpublic and religious schools in Committee for Public Education and Religious Liberty v. Nyquist. Rehnquist found that the U.S. Supreme Court was nearly unanimously hostile to all things religious, and liberal in many other ways.

Nearly 30 years later, Rehnquist prevailed with his 5-4 decision in Zelman v. Simmons-Harris (2002) upholding school vouchers that parents could use to attend religious schools. Rehnquist did not change for the Court; the Court had come around to his view.

Rehnquist's closest ally in the early years was Chief Justice Warren Burger, who seemed to join some of Rehnquist's dissents simply out of sympathy. By 1981, Burger knew whom to assign the difficult task of writing the decision defending the federal law excluding women from the draft.

Rostker v. Goldberg challenged the draft registration that was reactivated by President Jimmy Carter in the wake of the Soviet invasion of Afghanistan. Carter and the feminists demanded that women be drafted, too.

For ten years, the Supreme Court had invalidated virtually every law that differentiated between men and women, often with Rehnquist in dissent. The Court had even declared unconstitutional an Oklahoma law that set the alcohol drinking age for men at 21 but for women at 18, despite the 21st Amendment, which conferred on states the power to regulate liquor.

But Rehnquist commanded a 6-3 majority in favor of upholding a sensible distinction between men and women in the military draft. Rehnquist upheld the exemption for women, and quoted an earlier decision saying that judges "are not given the task of running the Army."

Rehnquist felt strongly that government's legislative, executive and judicial powers should be kept separate and distinct. It was again Rehnquist who wrote a 5-4 decision reversing the judge who ordered Missouri to increase teachers' salaries in the Missouri v. Jenkins desegregation case.

He told the lower federal judge "to restore state and local authorities to the control of a school system that is operating in compliance with the Constitution." That litigation had dragged on for 18 years until Rehnquist finally blew the whistle on its judicial activism.

That was not the first time Rehnquist put the brakes on a runaway judiciary. The most famous case in the important field of administrative law is Vermont Yankee Nuclear Power v. NRDC (1978), in which a liberal appellate judge had interfered with the process of a federal agency.

In a strongly worded reversal that shocked the legal community, Rehnquist wrote an opinion that attracted unanimous support on the Court. He declared that agency decisions should not be overturned "simply because the court is unhappy with the result reached."

As the years went on, Rehnquist showed his greatest skill in assembling a wobbly five-person majority, often relying on support by his classmate at Stanford Law School, Justice Sandra Day O'Connor. In 2000, Rehnquist wrote two 5-4 decisions for the Court that will live on far beyond his departure.

In United States v. Morrison, the Court reviewed a federal law that offered big damages in federal courts for domestic disputes between men and women, an issue that had always been handled under state law. Briefs filed by 67 feminist and liberal groups urged opening federal courts to domestic relations, and offering attorney's fees to entice lawsuits against deep pockets.

Congress had passed the law by a wide margin, and media pressure was intense to uphold it. The facts of the case involved a college coed seeking recovery for an alleged rape by a football player, so no one would be applauded for ruling against her.

Yet Rehnquist led a five-person majority to keep the federal courts out of marital and domestic disputes. In so doing, he affirmed his brilliant 5-4 decision five years earlier in United States v. Lopez, which recognized limits on federal power under the Commerce Clause.

Rehnquist's other 5-4 decision in 2000, Boy Scouts v. Dale, maintained the right of the Boy Scouts to decide for themselves whether to allow gay scoutmasters. Against a claim by liberal justices of greater societal acceptance of homosexuality, Rehnquist retorted that "the fact that an idea may be embraced and advocated by increasing numbers of people is all the more reason to protect the First Amendment rights of those who wish to voice a different view."

While Chief Justice Rehnquist is often described as a conservative, he was not conservative on gender issues or free speech issues. He dissented from Wooley v. Maynard, and he preferred to defer to state and local regulations on speech issues. He wrote a spirited dissent in which he supported a local ban on door-to-door canvassing in Watchtower Bible and Tract Society v. Village of Stratton (2002).

Rehnquist made a lasting contribution in these areas:

Liberals attempted to derail President Ronald Reagan's elevation of Rehnquist to Chief Justice by insisting that early in his career, as a clerk on the Supreme Court for Justice Jackson, Rehnquist had written a memorandum expressing some discontent with Brown v. Board of Education. Rehnquist explained that his written statements were merely advisory opinions reflecting the views of Justice Jackson, and did not reflect Rehnquist's personal views. Rehnquist was then confirmed as Chief Justice by a substantial margin in the U.S. Senate.

Liberals have also criticized Rehnquist's narrow view of recusal, as Rehnquist rarely recused himself from a case and would criticize recusal or defend non-recusal. He dismissed calls by U.S. Senators for Associate Justice Antonin Scalia to recuse himself in a case involving Scalia's friend Vice President Dick Cheney in his official rather than personal capacity.[3] Rehnquist did not recuse himself in a case concerning his alma mater Stanford University.[4]

Chief Justice Rehnquist wrote against the doctrine of falsifiability in his dissent from the landmark Daubert decision, which may have caused little use of that important doctrine in courts: