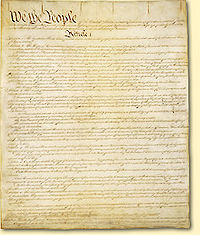 Federalism is a distinct feature of the U.S. Constitution.

Federalism is the system of co-sovereignty current in the United States, and various other nations[1] such that a national or federal government shares power along with state governments over the same territory and citizenry. More specifically, federalism involves dual sovereignty, or the allocation of power between the federal government and the states under the U.S. Constitution, with overlapping authority.

During the state ratifying conventions, Madison pointed out in the Virginia debate:[3]

In all cases where a majority are united by a common interest or passion, the rights of the minority are in danger. What motives are to restrain them? A prudent regard to the maxim, that honesty is the best policy, is found, by experience, to be as little regarded by bodies of men as by individuals. Respect for character is always diminished in proportion to the number among whom the blame or praise is to be divided. Conscience - the only remaining tie - is known to be inadequate in individuals; in large numbers, little is to be expected from it.

In this Madison describes both the deficiencies of a democracy, but also an unchecked national government.

Federalism is determining which powers and duties belong at the federal level and which belong at the state level. Under the Articles of Confederation, the states had most powers, and the Constitution was drafted with the purpose of granting the federal government additional powers. These powers are clearly identified under the Enumerated powers of Article I. Under the Constitution, individual issues would be framed in terms of states' powers vs. the proper role of the federal government. From 1800 until 1860, this debate was mostly viewed from the perspective of slavery vs. abolition of slavery. Beginning in the 1900s, the federalism debate has been viewed through a progressive vs. conservative perspective. In the 1930s, progressives re-labeled themselves, so the debate became liberal vs. conservative.

At the Constitutional Convention, Federalism developed into a part of the solution to the perceived failures of the Articles of Confederation. Events such as Shays' Rebellion strengthened the view that the Articles were insufficient over a long period of time.

During the Convention, the delegates left most powers to the states, while nationalizing 19 powers which they perceived to be proper functions for a general government. In general, however, the states remained sovereign

Starting in the Progressive Era after the passage of the Sixteenth Amendment, federal Grant-in-aid programs began to be used to undermine the dual sovereignty of America and drive the country in a more National direction.

Chief Justice William Rehnquist was a proponent of curbing the overreaching of the federal government. His leading decision was a 5-4 ruling in United States v. Lopez, 514 U.S. 549 (1995), which invalidated on federalism grounds a federal law prohibiting the carrying of firearms within 1,000 feet of the grounds of a public, parochial or private school. The leading Supreme Court decisions limiting the federal role, nearly all written by Justice or Chief Justice William Rehnquist, are:

Justice Kennedy, who as of 1997 was the pivotal fifth or "swing" vote on the U.S. Supreme Court, has also embraced federalism. "[F]ederalism was the unique contribution of the Framers to political science and political theory. Though on the surface the idea may seem counter-intuitive, it was the insight of the Framers that freedom was enhanced by the creation of two governments, not one."[7]

Since that ruling, there have been many decisions by the Supreme Court and lower courts limiting federal power to interfere with state sovereignty in fields of traditional state control. For example, The Fifth Circuit held that "[w]here Congress aims to change the usual constitutional balance between the states and the federal government, it must make unmistakably clear its intention to do so in the statute’s language." Premiere Network Servs. v. SBC Comm., 440 F.3d 683, 690 n.8 (5th Cir. 2006) (citing Will v. Michigan Dep't of State Police, 491 U.S. 58, 65 (1989) and Gonzales v. Oregon, 546 U.S. 243 (2006), emphasis added).