Ruth Bader Ginsburg (March 15, 1933 – September 18, 2020)[1] was a liberal Associate Justice of the U.S. Supreme Court, nominated by President Bill Clinton in 1993 to replace Byron White. Prior to that, she had served as an appellate judge on the D.C. Circuit, as a lead attorney for the ACLU, and as a law professor. In the 1970s, before joining the Supreme Court, she sought the ratification of Equal Rights Amendment, which failed. She was noted for wanting the law to treat women in an identical manner as men, and girls in an identical manner as boys. She sided with abortion in every possible way.[2]

Shortly after graduation from Cornell she married Martin Ginsburg. They had two children and four grandchildren.

Although raised Jewish, she later was no longer observant. Ginsburg became a feminist cult icon.

Ginsburg broke from tradition upon her selection to the Supreme Court by eschewing the traditional American judicial robe for a French robe d'avocat (Justice O'Connor would later follow suit), and later wearing an assortment of fancy neckwear. She was known for her unusual collection of jabots (a decorative clothing item, often worn by female judges in other countries). She had particular ones she wore: crocheted yellow and cream with crystals (a gift from her law clerks) when issuing a majority opinion, and black with gold embroidery and faceted stones when issuing a dissenting opinion.

Ruth Bader Ginsburg co-authored the book called Sex Bias in the U.S. Code in 1977 with a feminist, Brenda Feigen-Fasteau, for which they were paid with federal funds under Contract No. CR3AK010. The 230-page book was published by the U.S. Commission on Civil Rights. It was written to identify the federal laws that allegedly discriminate on account of sex and to promote ratification of the then-pending federal Equal Rights Amendment (ERA), for which Ginsburg was a fervent advocate. Here are some of Ginsburg's liberal recommendations set forth in her book Sex Bias in the U.S. Code.[5]

Ginsburg called for the sex-integration of prisons and reformatories so that conditions of imprisonment, security and housing could be equal. She explained, "If the grand design of such institutions is to prepare inmates for return to the community as persons equipped to benefit from and contribute to civil society, then perpetuation of single-sex institutions should be rejected." (101) She called for the sex-integration of Boy Scouts and Girl Scouts because they "perpetuate stereotyped sex roles." (145) She insisted on sex-integrating "college fraternity and sorority chapters" and replacing them with "college social societies." (169) She even cast Constitutional doubt on the legality of "Mother's Day and Father's Day as separate holidays." (146)

Ginsburg called for reducing the age of consent for sexual acts to persons who are "less than 12 years old." (102) She asserted that laws against "bigamists, persons cohabiting with more than one woman, and women cohabiting with a bigamist" are unconstitutional. (195) She objected to laws against prostitution because "prostitution, as a consensual act between adults, is arguably within the zone of privacy protected by recent constitutional decisions." (97) Ginsburg wrote that the Mann Act (which punishes those who engage in interstate sex traffic of women and girls) is "offensive." Such acts should be considered "within the zone of privacy." (98)

Ginsburg said that the concept of husband-breadwinner and wife-homemaker "must be eliminated from the code if it is to reflect the equality principle," (206) and she called for "a comprehensive program of government supported child care." (214) She demanded that we "firmly reject draft or combat exemption for women," stating that "women must be subject to the draft if men are." But, she added, "the need for affirmative action and for transition measures is particularly strong in the uniformed services." (218)

An indefatigable censor, Ginsburg listed hundreds of "sexist" words that must be eliminated from all statutes. Among words she found offensive were: man, woman, manmade, mankind, husband, wife, mother, father, sister, brother, son, daughter, serviceman, longshoreman, postmaster, watchman, seamanship, and "to man" (a vessel), even though most of these words with the -man suffix date back to Middle English in which it meant "human" and not specifically "male". (15-16) She even wanted he, she, him, her, his, and hers to be dropped down the Memory Hole. They must be replaced by he/she, her/him, and hers/his, and federal statutes must use the bad grammar of "plural constructions to avoid third person singular pronouns." (52-53)

She also had some involvement in writing the 1980 book Constitutional Government in America, having written a chapter in it. In this chapter, she condemned the Supreme Court's ruling in Harris v. McRae, claiming that taxpayer-funded abortions should be a constitutional right.[4]

The only high court challenge to the government take over of automotive companies came by a one-day inquiry by Justice Ginsburg. She decided against pursuing and let Italian automaker Fiat acquire a majority stake in U.S. company Chrysler.[7]

Not in recent memory has a Supreme Court Justice ever endorsed another Justice for the lifetime appointment. Justice Ginsburg has publicly stated her overwhelming approval of Sonia Sotomayor.[8]

In a 2012 interview on Al Hayat, Ginsburg stated that she would not look to the U.S. Constitution if she were drafting a constitution in the year 2012. "I might look at the constitution of South Africa. That was a deliberate attempt to have a fundamental instrument of government that embraced basic human rights, have an independent judiciary. It really is, I think, a great piece of work that was done."[9]

Ginsberg stated in a 2009 interview with the New York Times that she thought the 1973 Roe v. Wade case which legalized abortion concerned the elimination of undesirable members of the populace, or as she put it "populations that we don't want to have too many of." Many have interpreted this as an endorsement of abortion as a method of population control and/or eugenics.[10][11][12] While shocking, such ideas are hardly new: similar views were endorsed by eugenicist Margaret Sanger, the founder of Planned Parenthood years ago.

The direct quote from the interview in context is below:

Ginsburg: Yes, the ruling about that surprised me. [Harris v. McRae – in 1980 the court upheld the Hyde Amendment, which forbids the use of Medicaid for abortions.] Frankly I had thought that at the time Roe was decided, there was concern about population growth and particularly growth in populations that we don't want to have too many of. So that Roe was going to be then set up for Medicaid funding for abortion. Which some people felt would risk coercing women into having abortions when they didn't really want them. But when the court decided McRae, the case came out the other way. And then I realized that my perception of it had been altogether wrong.

Though Ginsburg as the most liberal member of the court obviously supports abortion (and has ruled in the favor of the pro-abortion movement in a number of cases, including Stenberg v. Carhart), even going so far as to voice support for making taxpayer-funded abortion a Constitutional right,[4] she has been surprisingly critical of the Supreme Court's decision in Roe v. Wade. At the time the decision was written (1973), abortion rights were being debated in state legislatures across the country and legislative attempts to criminalize abortion were stymied by the courts, rather than being left to a decision by the American people. This repolarized the debate, and the strong polarization and divisiveness of the issue is still seen today. Ginsburg surprised many prior to her confirmation hearings in 1993, by articulating this issue, saying that Roe v. Wade "halted a political process that was moving in a reform direction and thereby, I believe, prolonged divisiveness and deferred stable settlement of the issue."[13] However, Susan Hirschmann of EagleForum when testifying against the nomination of Ruth Ginsburg before a Senate Subcommittee indicated the real reason why she was against Roe v. Wade was because it failed to emphasize her views on equality between sexes and was purely political than out of any concern for judicial elements.[14]

Ginsburg has had several major health issues in her lifetime:

Martin David Ginsburg, Justice Ginsberg's husband, died June 27, 2010, at their home in Washington, D.C., due to complications from Metastatic Cancer.[15] Despite her numerous health ailments, and calls for her to retire (especially during the Obama administration when the Democrats held the Senate), she refused, saying her work helps her deal with the grief of losing her husband. In 2020, it was reported that she was undergoing chemotherapy treatment for cancer again, leaving some then to wonder if she may retire soon.[16] She never did retire and instead passed away while still on the Supreme Court, at age 87. 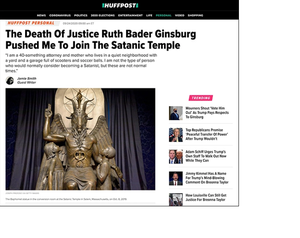 Ginsburg died on September 18, 2020 at the age of 87 following complications of metastatic pancreatic cancer.[1][17] As many people were sad that the justice had passed away, Leftists angrily reacted with profanity on social media over her not having retired during the Obama era.[18] Her death sparked a vacancy in the Supreme Court until Trump nominated Amy Coney Barrett to replace RBG.

In her last year of life, Justice Ginsburg stated that the effort to add the Equal Rights Amendment should start anew and not try to ignore that the deadline passed for its ratification, as some feminists argue.

Justice Ginsburg had several notable opinions and dissents during her nearly 30-year tenure on the Supreme Court. These include:[19]