The term cancer refers to many different diseases. They all have in common uncontrolled cell proliferation (growth and division). Cancers are usually named for the organ or cell type that is originally involved. After beginning at one site, the cancerous cells may metastasize (spread) to other organs and then continue to grow, causing more damage in the new location as well. The cancer is still named by its place of origin.

All known carcinogens (cancer-inducing agents), which include various chemicals, viruses, and ionizing radiation, act by breaking chemical bonds to produce DNA mutations.[1] These mutations occur randomly throughout the genome, and if not repaired by the cell's DNA repair mechanisms, they can impede normal cellular functions. If enough unrepaired mutations occur in genes associated with cell growth, this can cause the cells to grow when they should not. 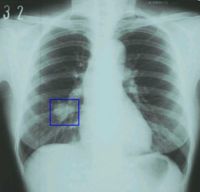 X-Ray of patient with cancerous tumor in right lung

Data are for USA

Preventative strategies are continuously being revised. Please see references below for up to date information.

Cancer treatment requires destruction or removal of cancerous cells with minimal effect to healthy cells. Since the cancerous cells are descended from healthy cells and are thus very similar to them, this is very difficult. Furthermore, the small differences are dependent on what mutations initially caused the cancer in the first place, so most treatments are only effective against a certain percentage of cancers from any one tissue.

Chemotherapy is the use of drugs that kill tumor cells. Conventionally, the drugs that are used are those that target cells which are rapidly undergoing mitosis; this approach is effective but is limited by side effects, which occur because these drugs have an adverse effect on normal tissues that contain rapidly-dividing cells. Research is under way to find drugs with a wider therapeutic index. One approach is to study specific molecular markers that may be used to identify cancer cells, and to develop drugs that preferentially kill cells that exhibit those markers.

DCA is available for purchase from websites and physicians, although it is still in the human testing trials in Canada. The trials have proved promising, but this off-label use of DCA to treat cancer has sparked lots of controversy. Most chemotherapy treatments are not so controversial, since they have undergone much more testing to guarantee their safety.

Radiation therapy involves the use of precisely-targeted radiation to destroy cancer cells. Because radiation damages DNA and thus has the ability both to treat and to cause cancer, this method of treatment must be administered by physicians highly skilled in physics.

The goal of cancer surgery is to physically remove the abnormal cells. This becomes more difficult after the cancer spreads. Often, chemotherapy is used either before or after surgery to kill cancer cells that have metastasized.

The immune system contains a number of cell types, such as NK cells and killer T cells that have the capability to destroy other cells that have become infected with viruses or have become cancerous. Immunotherapy involves the enhancement or potentiation of these natural defenses against tumor cells. This is useful because some cancer cells may have mutations that make it hard for the immune system to recognize them as abnormal. A common procedure is to remove immature immune cells from the patient's bone marrow, purify the T-cells and expose them to antigens from the tumor. The activated cells are then re-injected, allowing them to seek out cancerous tissues.

Clearly the most controversial type of treatment involves the use of alternative medicine. Sometimes this is done at the same time as conventional treatments, but naturopathic doctors strongly discourage this practice, since it is rarely effective. Alternative treatments rely heavily on the immune system, which is usually harmed by conventional treatment. With a healthy immune system, the following are sometimes used:

German doctors have also found that a high fever (of 104 degrees Fahrenheit) seems to eliminate or at least hinder the progression of cancer.[5] For this reason, it is not uncommon in Germany to have a fever induced when chemotherapy is administered.[6]


Why are these "alternative?" Many say it is because they don't work. However, there are many success stories of how they did.[7] Others say theses are less accepted because they take more time to work. In rare cases such as some kinds of leukemia, there might not be enough time for the immune system to be built up for the task. There is also a "point of no return," after which the immune system is too weak to overcome the illness. Others say that it is a high-profit conspiracy.[8] Each argument has some supporting evidence, some of which is irrefutable, but much of which could be explained away.

The Christian apologist Gary Habermas wrote: "Double-blind prayer experiments: where people pray for others with terminal illness. Habermas admitted that most such experiments have not worked, but the three that he knows of that have indeed worked were cases of orthodox-Christians praying for the sick."[10]

The World Health Organization declares concerning secular Europe: "Europe comprises only one eighth of the total world population but has around one quarter of the global total of cancer cases with some 3.7 million new patients per year."[11]

Irreligious countries such as European countries and China, have significant problems with cancer (see: Atheism and cancer). The World Health Organization declares concerning secular Europe: "Europe comprises only one eighth of the total world population but has around one quarter of the global total of cancer cases with some 3.7 million new patients per year."[12]