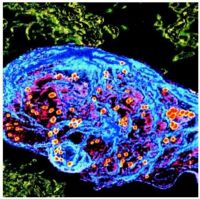 In relation to homosexuality and AIDS, the original spread of AIDS is generally attributed to the promiscuity of homosexual men. Originally the syndrome was called the "gay disease" because the overwhelming majority of patients were homosexual men.

In 2019, the Center for Disease Control and Prevention (CDC) website declared:

As of 1998, fifty-four percent of all AIDS cases in the United States were homosexual men, and the CDC stated that nearly ninety percent of these men acquired HIV through sexual activity with other men.[6]

There is considerable controversy around the modes of AIDS transmission in Africa. In general, however, it is believed that a high proportion of cases arise from heterosexual activity or from healthcare transmission (e.g. infected needles).

On March 15, 2004 Medscape published an article entitled New Look at "Gay Bowel Syndrome" in which they linked HIV infection with gay bowel syndrome.

In 2004, the prominent medical website, WebMD, stated the following: "[Bisexual] Men who have sex with men and women are a "significant bridge for HIV to women," the CDC's new data suggest."[13]

In 2006, the number of cases of HIV in children who had been sexually molested by homosexual men, reached a record high.

Modern AIDS treatment and its current significant reduction in mortality

In 2016, The Daily Beast pointed out that there is growing evidence that HIV is mutating to become resistant to antiviral drugs.[15]