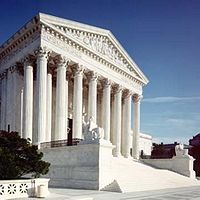 The phrase Living Constitution means the U.S. Constitution should be interpreted however a majority of the U.S. Supreme Court feels it should. This view of the Constitution is closely associated with judicial activism and Judicial Supremacy, and is responsible for some of the most dangerous rulings in history. Phyllis Schlafly points out in her book The Supremacists that "Living" and "evolution" (or "evolving") are code words used by judicial supremacists to express their conceit that they can substitute meanings that were never present in the Constitution or our statutes."[1]

The doctrine of the living constitution places the Supreme Court at the head of an unauthorized, ongoing Constitutional Convention.[2][3][4][5][6][7][8]

The first progressive to develop the view that the Constitution is a living and breathing document was Woodrow Wilson. He wrote in his book Constitutional Government in the United States that:

Living political constitutions must be Darwinian in structure and in practice. Fortunately, the definitions and prescriptions of our constitutional law, though conceived in the Newtonian spirit and upon the Newtonian principle, are sufficiently broad and elastic to allow for the play of life and circumstance.[9]

He further expanded on this idea during the United States presidential election, 1912, as a part of his "New Freedom" program that:

All that progressives ask or desire is permission-in an era when "development," "evolution," is the scientific word-to interpret the Constitution according to the Darwinian principle; all they ask is recognition of the fact that a nation is a living thing and not a machine.[10][11]

Herbert Croly, another early and influential leader of progressive thought, wrote in his book The Promise of American Life of the opportunity that the Federal judiciary offered for altering the immutability of the Constitution:[12]

The only Americans who hold important official positions for life are the judges of the Federal courts. Radical democrats have always protested against this exception, which, nevertheless, can be permitted without any infringement of democratic principles. The peculiar position of the Federal judge is symptomatic of the peculiar importance in the American system of the Federal Constitution. A senator would be less likely to be an efficient and public-spirited legislator, in case he were not obliged at regular intervals to prove title to his distinction. A justice of the Supreme Court, on the other hand, can the better perform his special task, provided he has a firm and permanent hold upon his office. He cannot, to be sure, entirely escape responsibility to public opinion, but his primary duty is to expound the Constitution as he understands it; and it is a duty which demands the utmost personal independence. The fault with the American system in this respect consists not in the independence of the Federal judiciary, but in the practical immutability of the Constitution. If the instrument which the Supreme Court expounds could be altered whenever a sufficiently large body of public opinion has demanded a change for a sufficiently long time, the American democracy would have much more to gain than to fear from the independence of the Federal judiciary.[13]

Frank Johnson Goodnow also mused that the judiciary would be the best place to affect change in the Constitution.[12] Goodnow asked the following question:

Can a practically unamendable constitution, adopted in the conditions and under the influences of the political thought prevailing at the end of the eighteenth century, be adapted by judicial interpretation to the needs and thought of the twentieth century without causing us to lose the advantages which are commonly regarded as attached to a written constitution?[14]

He came to the conclusion that "the final judicial interpretation of the United States constitution would in all cases be made by that court which ... has shown greater capacity than perhaps any other judicial body to treat the constitution of the United States as an instrument ... unchanging provisions are adaptable to the infinite variety of the changing conditions of our national life".[14]

Other progressives have also had a hand in the development of this concept, such as Louis Brandeis with his Brandeis Brief. Brandeis would later catalog some of his thoughts on what had occurred.[15]

Some supporters of the "living" method of interpretation refer to themselves as organicists.[16][17][18][19]

One of the first times that the concept of a "living constitution" was brought out for public consumption was during the 2000 election, almost 90 years after it came into existence. On March 2, 2000, then Presidential Candidate Al Gore said the following:[20]

Gore: I would look for justices of the Supreme Court who understand that our Constitution is a living and breathing document, that it was intended by our founders to be interpreted in the light of the constantly evolving experience of the American people. The right of privacy, just to take one example, was found by Justice Harry Blackmun in the Constitution even though the precise words are not there.

This 8 decades, nearly century-long lack of disclosure to the wider public leaves the impression that the idea is entirely new.

While many progressives disfavor openly using the phrase living constitution, there are a handful who are defiant[21] with regard to keeping it in public view. David A. Strauss,[22] a professor of Law at Harvard who has argued 18 cases in front of the Supreme Court, defines the living constitution this way:

A "living constitution" is one that evolves, changes over time, and adapts to new circumstances, without being formally amended.[21][23]

One of the first times the phrase "living Constitution" was expressly used inside the court room was by the liberal four-Justice dissent in Rummel v. Estelle.[24] It has been embraced by the left side of the Court in numerous rulings since.

The courts have worked under the idea that the Constitution is living and breathing, long before announcing it. As early as 1926, in Village of Euclid v. Ambler Realty Co., the courts held:

Regulations the wisdom, necessity and validity of which, as applied to existing conditions, are so apparent that they are now uniformly sustained a century ago, or even half a century ago, probably would have been rejected as arbitrary and oppressive. Such regulations are sustained, under the complex conditions of our day, for reasons analogous to those which justify traffic regulations, which, before the advent of automobiles and rapid transit street railways, would have been condemned as fatally arbitrary and unreasonable. And in this there is no inconsistency, for, while the meaning of constitutional guaranties never varies, the scope of their application must expand or contract to meet the new and different conditions which are constantly coming within the field of their operation. In a changing world, it is impossible that it should be otherwise. But although a degree of elasticity is thus imparted not to the meaning, but to the application of constitutional principles, statutes and ordinances which, after giving due weight to the new conditions, are found clearly not to conform to the Constitution of course must fall.[25]

Supporters of the concept argue that the living constitution is one that changes based on the changing values of the people. Some proponents point to the fact that there are many places of silence on many issues within the Constitution itself. Others, such as Cass Sunstein, a scholar at Harvard, argues that the Constitution does not come with an instruction manual.

The Constitution does not set out the instructions for its own interpretation. A theory of interpretation has to be defended, rather than asserted, and the defense must speak candidly in terms of the system of constitutional law that it will yield.[27]

In testimony in front of the Senate Judiciary Committee, Supreme Court Justice Stephen Breyer argued that "the hardest problem in real cases is that the words "life, liberty, or property" do not explain themselves, "liberty," nor does "the freedom of speech" say specifically what counts as the freedom of speech."[28] He is alluding to what Sunstein plainly stated, that the Constitution has no instruction manual. So he argues in favor of interpretation, that they are "trying to apply this Constitution with those values underlying the words, to circumstances that are continuously changing, is not something that can be done by a computer. Neither of us thinks that. No one thinks that. And, therefore, it calls for human judgment." Judgement is required, "to work out how those ancient values apply to modern circumstances."[28]

Justice William Brennan believed that "judicial power resides in the authority to give meaning to the Constitution,"[29] a surprisingly frank description of how believers in the "living constitution" view the role of the judicial branch of the United States.

Critics of the concept point to the importance of the meaning and definition of words. Chief Justice William Rehnquist made the following point:

Other critics[31] along this same line point to the fact that James Madison himself made similar observations:

I entirely concur in the propriety of resorting to the sense in which the Constitution was accepted and ratified by the nation. In that sense alone it is the legitimate Constitution. And if that is not the guide in expounding it, there may be no security for a consistent and stable, more than for a faithful exercise of its powers. If the meaning of the text be sought in the changeable meaning of the words composing it, it is evident that the shape and attributes of the Government must partake of the changes to which the words and phrases of all living languages are constantly subject. What a metamorphosis would be produced in the code of law if all its ancient phraseology were to be taken in its modern sense.[32]

The point that both Rehnquist and Madison are getting at is that when word meanings change, constitutions can be forced to carry a different definition. However, that's not the constitution that was ratified and agreed upon at the time. That's what makes amendments so important, because it gives the citizens a greater opportunity to debate those changes. It also validates the changes with a stamp of approval and a point in time of the change.

Both sides see pros and cons to their preferred approach.[33] The end result is that the citizens are robbed of their ability to self-govern when the amendment process is circumvented.

During the 2016 presidential election, Justice Antonin Scalia, one of the most outspoken critics of the concept of a living constitution,[34] passed away. His passing placed a debate about a "living constitution" front and center on the national stage. The two candidates leading the field of contenders in the Republican Party discussed the role of the Constitution, the Courts, as well as Scalia's effectiveness as a jurist. Donald Trump was critical of the role of the judiciary in deciding non-judicial, legislative matters; stating that the court case Roe v. Wade "was wrongly decided".[35] Ted Cruz noted that the United States is only "one liberal justice away" from the end of the right to keep and bear arms.[36]

These arguments highlight the fact that the courts have provided an end-run-around the amendment process, which is the proper way these changes should be handled.

What effect a comparison of countries' constitutions will have on the concept of a living constitution has not yet been determined, since some constitutions are more solid than others.