Kentucky, the Bluegrass State, entered the Union in 1792, making it the fifteenth state. Kentucky's capital is Frankfort, and the largest city is Louisville, with a Metro population surpassing 1,000,000. Kentucky is famous for many things, including the Kentucky Derby, bourbon, Kentucky Fried Chicken, coal, bluegrass music, boxing great Muhammad Ali, the basketball program at the University of Kentucky, and conservative Senator Rand Paul. President Donald Trump won Kentucky by 30 percent in 2016, the largest margin of victory for a Republican presidential candidate there in more than forty years.

The state Constitution of Kentucky, like all of the other 50 states, acknowledges God or our Creator or the Sovereign Ruler of the Universe. It says:

We, the people of the Commonwealth of Kentucky, grateful to Almighty God for the civil, political and religious liberties we enjoy, and invoking the continuance of these blessings, do ordain and establish this Constitution.

In colonial times, the area was essentially wilderness. An unnamed encampment there, upon hearing of the Battle of Lexington and Concord in the Massachusetts Bay colony, which started the American revolution, chose the name Lexington. It is now the second largest city in Kentucky.

Kentucky was founded as a county of the state of Virginia in 1776. Kentucky County was divided into three counties in 1780, and the three became a state in their own right in 1792. Kentucky was the fifteenth state to enter the Union, after Vermont the previous year. During the Civil War, Kentucky's government remained loyal to the Union, though a Confederate government based itself in Bowling Green, in the south of the state. The state was invaded in September 1861, and its capital, Frankfort, was captured by Confederate forces in 1862, the only Union capital to fall into Confederate hands during the war.[1] The first major explorer into the state is Daniel Boone.

The southwestern portion of the state consistently has been solidly Republican since the late 1800s. One well-known politician from the region is Eugene Siler, a staunch conservative and non-interventionist who served as the U.S. representative from the 8th congressional district during the mid-1900s and has been viewed as a forerunner to current Sen. Rand Paul as well as Rep. Thomas Massie.[2]

Football has become increasingly associated with Kentucky as well, due to the University of Louisville's team's growth under the coaching of Bobby Petrino. In 2007, the Cardinals competed in and won at the Orange Bowl. During the 2007 football season, the University of Kentucky has been extremely successful compared to the past, having beaten several ranked teams, including Louisville and #1 (at the time) LSU.

Kentucky is generally considered a conservative state. Republicans Mitch McConnell and Rand Paul are their U.S. Senators. Senator McConnell is Minority Leader of the Senate. McConnell's wife, Elaine Chao, was the Secretary of Transportation under President Trump and formerly was United States Secretary of Labor under President George W. Bush. A former governor of the state is Tea Party Republican Matt Bevin, only the third Republican governor since World War II to be elected along with Louie B. Nunn in 1967 and Ernie Fletcher in 2003.

Kentucky has six representatives in the U.S. House of Representatives, and these seats are held by Republicans James Comer, Brett Guthrie, Thomas Massie, Andy Barr, and Hal Rogers, and the Democrat John Yarmuth of Louisville.

The Kentucky State Senate has 27 Republicans, and 11 Democrats. In the 2016 elections, the Republicans made massive gains in the State House, gaining a supermajority and holding the chamber for the first time since 1921.[3] The Kentucky State House was the last state legislature in the South to not have a Republican majority, and GOP trifecta in the state will allow conservative legislation to be passed.[3][4] 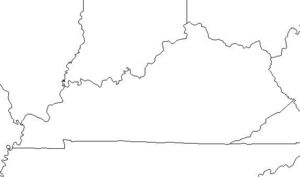 Kentucky borders several other states: to the north Ohio, Indiana, and Illinois, to the south Tennessee, to the east Virginia and West Virginia, and to the west Missouri. The Ohio River makes up the northern border of Kentucky. It also has the largest cave system in the United states Called mammoth cave. Most of kentucky is rural. even though almost all of Kentucky is hilly, the eastern part contains the Appalachian Mountains