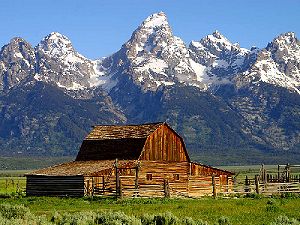 Wyoming is a conservative state in the western United States, and the first state to block new liberal science standards that promote the falsehoods of global warming and evolution. Wyoming became a state on July 10, 1890. It was the 44th state to join the union. It is the home of the world renowned Yellowstone National Park. In 2000 its population was a little more than 500,000, the lowest of any state in the country. The state capital is Cheyenne. The current Governor is Mark Gordon.

The state Constitution of Wyoming, like all of the other 50 states, acknowledges God or our Creator or the Sovereign Ruler of the Universe. It says:

We, the people of the State of Wyoming, grateful to God for our civil, political and religious liberties, and desiring to secure them to ourselves and perpetuate them to our posterity, do ordain and establish this Constitution.

Wyoming is the number one coal producer in the United States, having surpassed West Virginia and Kentucky in coal production since the 1980s, largely due to surface (or strip) mining activity in the Powder River Basin.

Wyoming is a strongly conservative state, having voted Republican in all Presidential elections from 1968 onwards. The Powder River Basin, in northeastern Wyoming, is one of the largest coal-producing region in the world, accounting for 40% of all coal mined in the United States.[1]

Wyoming's major geologic basins contain some of the largest fossil fuel deposits in the United States. Wyoming's estimated recoverable coal reserves are second only to Montana’s, its dry natural gas reserves are second only to those in Texas, and its crude oil reserves are among the largest in the Nation. Wyoming has over a dozen of the Nation's largest oil and gas fields, including the Pinedale and Jonah natural gas fields, which rank among the top 10 in the country.

Wyoming has substantial wind power potential. The Southern Wyoming Corridor, where a gap in the Rocky Mountains channels strong winds across the plains, is ideally suited for wind power development. Wind power resources also exist in the northwestern part of the State. Although Wyoming's aggregate energy demand is low, per capita energy consumption is the second highest in the Nation due to an energy-intensive economy that is dependent on fossil fuel extraction, processing, and transportation. The industrial sector, which includes Wyoming's mining, oil, and gas industries, is the State's leading consumer of energy.

Wyoming typically accounts for 3% of annual U.S. oil production. The State is a transportation crossroads for Canadian crude oil imports and local Rocky Mountain production flowing to U.S. Midwest and Mountain markets. The State has five oil refineries, which lie in the southern and eastern parts of the State. Wyoming's total petroleum consumption is low, and refineries deliver much of their product to markets in neighboring States. Wyoming is one of the few States in the Nation that allow the statewide use of conventional motor gasoline. (Most States require the use of specific gasoline blends in non-attainment areas due to air-quality considerations.)

Although its proven crude oil reserves account for only about 3% of the U.S. total, Wyoming has enormous deposits of oil shale rock, known as marlstone, which can be converted into crude oil through destructive distillation. The Green River Formation, a group of basins in Colorado, Wyoming, and Utah, contains the largest known oil shale deposits in the world. Wyoming's oil shale deposits, concentrated in the Green River and Washakie Basins in the southwestern part of the State, contain an estimated 300 billion barrels of oil, equal to about one-fourth of the world's proven oil reserves. Although this natural resource holds tremendous promise, oil shale development remains speculative and faces several major obstacles involving technological feasibility, economic viability, resource ownership, and environmental considerations. Wyoming's oil shale deposits are less favorable for commercial extraction than those in Utah and Colorado because they are generally situated in thinner, less continuous layers.

Wyoming is one of the top natural gas-producing States in the Nation and typically accounts for almost one-tenth of U.S. natural gas production. Drilling activities take place throughout the State, but most of Wyoming's production comes from fields in the Greater Green River Basin.

Recovery of coalbed methane from coal seams in the Powder River Basin has grown rapidly since the late 1990s and now accounts for about one-fifth of State natural gas production. Wyoming is the third leading coalbed methane producer in the United States, after Colorado and New Mexico. The full potential of Powder River Basin coalbed methane resources has not been tapped due to the basin's few pipelines and rugged terrain. The Bureau of Land Management approved new drilling in the basin in 2003, which may encourage increased production from that area.

Unlike other major U.S. natural gas producing regions, Wyoming's natural gas production is expanding. However, State consumption is low and Wyoming generally consumes less than one-tenth of the natural gas it produces. Major pipeline systems deliver the majority of Wyoming supply to markets in the Midwest and California, and natural gas producers have proposed a new pipeline to ease transportation constraints and help move Wyoming's increasing output to the Midwest. The proposed system, known as the Rockies Express Pipeline and scheduled to be in service by January 2008, will originate in northwestern Colorado and add supply in Wyoming's Greater Green River Basin for delivery to Midwest markets.

The Powder River Basin in northeastern Wyoming is the largest coal-producing region in the Nation, accounting for nearly two-fifths of all coal mined in the United States. Power River Basin coal seams are thick and facilitate surface mining, making extraction easy and efficient. As a result, the price of Powder River Basin coal at the mine mouth is less than that of coal produced elsewhere in the country. Powder River Basin coal also has lower sulfur content than other coal varieties, making it attractive for electricity generators that must comply with strict emission standards.

More than thirty States receive coal from Wyoming, and several Midwestern and Southern States are highly or entirely dependent on Wyoming supply. Two railroads, operating the Powder River Basin Joint Line, move coal out of the Powder River Basin. In May 2005, three train derailments severely damaged the Joint Line, causing the railroads to curtail promised deliveries to electric utilities in several States. The affected utilities were forced to either buy more expensive coal supplies from other sources or reduce coal use by using other, more expensive fuels. A second railroad line serving the Powder River Basin has been proposed to provide an alternative coal transportation route and alleviate bottlenecks on the Joint Line.

Coal-fired power plants dominate Wyoming electricity generation. Small hydroelectric facilities and a growing number of wind farms also contribute to the electric power grid. Although most of Wyoming's wind power facilities are in the southeastern part of the State, its largest wind facility is situated in the southwest corner of the State. State electricity demand is low, and Wyoming exports electricity to neighboring States. Electricity transfers may reach as far as California in the future. In April 2005, four western State governors agreed to develop a 1,300-mile high-capacity power line from Wyoming to California that would allow as much as 12 thousand megawatts of electricity to flow from the energy-rich Rocky Mountain region to high-demand markets in California.