Missouri is a Midwestern state that was admitted to the Union as a slave state on August 10, 1821. Its nickname is the "Show Me State". Its capital is Jefferson City and its largest cities are, respectively, Kansas City, St. Louis, and Springfield. Missouri borders Illinois, Kentucky, Tennessee, Arkansas, Oklahoma, Kansas, Iowa, and Nebraska. The current Governor is Mike Parson.

Under a two-party system, Missouri was a swing state in presidential elections up until 1996 (the metropolitan areas of St. Louis and Kansas City are solidly socialist while the rest of the state is solidly Republican). It had consistently supported the winning candidates since 1960 until 2008 when it favored John McCain, who lost to the progressive Barack Hussein Obama. Before Obama, the last losing presidential candidate to win Missouri was Adlai Stevenson in 1956. Since 2008, Marxists who advocate single party control and the outlawing of political opposition,[1] have effectively gained control of the Missouri Democrat Party.[2]

Kim Gardner is the Marxist prosecutor elected circuit attorney[5] of St. Louis in 2016. Gardner was criticized ahead of the election for releasing a political ad paid for by the Safety and Justice Super PAC that received funding from liberal billionaire George Soros, according to the St. Louis Post-Dispatch.[6] The total funds donated by the super PAC were at least $190,750. It was not immediately clear what her campaign budget was or who else contributed. Gardner won her 2020 primary re-election bid while under criminal investigation.[7] Gardner is a member of the Democratic party.

Gardner allowed the release of all 36 rioters and looters arrested in the city following riots in which a retired Black St. Louis Police Captain was murdered by Black Lives Matter protesters.[8] The Marxist liberal activist leading the mob stood outside the home of Mark and Patricia McCloskey with a bullhorn screaming, "You can't stop the revolution!" Weeks later the same Marxist activist, Cori Bush, won the Democrat primary nomination for the 1st district of Missouri for a seat in the U.S. House of Representatives from the City of St. Louis, effectively winning the general election.[9] Gardner indicted a married couple for exercising their 2nd Amendment rights on their own property when they were assaulted and threatened by white Black Lives Matter terrorists.[10]

Progressive rioters murdered 77 year old retired Black Police Captain David Dorn working as a private security guard.[11] The shooting and theft was posted on Facebook live. Dorn served on the St. Louis police force for 38 years. Dorn’ s personality was described as “bigger than life...a fun guy, a happy guy....He wanted them to do the right thing all the time." The Ethical Society of Police, which represents black officers in St. Louis, said in a news release that Dorn was “the type of brother that would’ve given his life to save them if he had to.”[12] 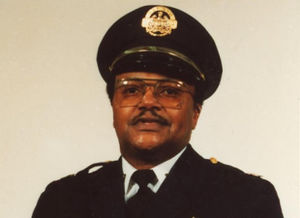 KCUR reported following the Minneapolis riots, Kansas City's Black Lives Matter protests lasted late into the night.[20] The crowd removed barricades and began walking neighborhoods, chanting “Who's streets? Our streets!” and " “No justice, no peace!". Facebook an advertisement saying "Black Lives Matter. Enough is Enough”. More than 3,000 people showed up.[21] Police announced they found “stashes of bricks and rocks in & around the Plaza and Westport to be used during a riot”. The Daily Caller reported: 4 year old LeGend Taliffero was murdered by Marxist gangbangers during the BLM riots.

On May 30, 2020 "protesters" set a police car on fire. broke windows, and vandalized the Country Club Plaza business district including, Foot Locker, Victoria's Secret, H&M, The North Face, Cafe Trio, Season's 52, P.F. Chang's and other employers struggling to revive after the coronavirus lockdown.[23] On June 1, 2020 protests grew more violent as protesters threw rocks and bottles at police.[24][25][26] More than 150 people were arrested.[27] Jackson County’s prosecutor, Jean Peters Baker, refused to file charges against anyone and Mayor Quinton Lucas said he would likely pardon anyone if she did. Meantime the prosecutor encouraged rioters to file charges against police.[28] In the first week of June there were more than 230 arrests at the protest.

Kansas City had 68 homicides when the riots started and was on pace for a recorded year, over the next 90 days the homicides doubled to 139.[29] About three-quarters of the victims are young black mean as well as most of the suspects.[30]

Four-year-old Legend Taliferro was shot while he slept in his bedroom early on the morning of June 29, 2020. Kansas City Police believe this was not a random shooting and that the apartment was targeted.[31] A week later, some 200 federal law enforcement agents from the FBI, U.S. Marshals Service and other agencies surged into Kansas City. Mayor Lucas said he was blindsided by the White House Press Secretary Kayleigh McEnany's announcement of Operation LeGend. The mayor was found later to have been lying.

Evidence indicates the woman who made false allegations against former Missouri Governor Eric Greitens was bribed to willfully lie under oath and engaged in extensive perjury in an effort to oust the rising Republican star from office. Katrina “Kitty” Sneed, testified under oath that she secretly met with Kim Gardner in a hotel room in January and February of 2018.

Following the secret meeting, Gardner charged Greitens with felony invasion of privacy in February 2018 for allegedly taking nude a photograph of Sneed without her consent and threatening to use the photo for blackmail. Greitens denied the allegations and Gardner never produced any evidence.

Sneed claimed during the deposition that the meeting with Gardner prompted her to come forward with a series of allegations against the then-Missouri Governor. When questioned under oath Sneed admitted she was reluctant to testify because she might have been remembering her accusations “through a dream.” When subsequently deposed, Sneed claimed she had never seen the photograph Greitens allegedly had taken of her and that at the time she also saw no phone or camera to take the photograph.

During Greitens’ felony invasion of privacy trial in May 2018, a forensic examiner extracted data from Greitens’ cellphone and email account. The examination revealed no photograph of Sneed was ever taken or deleted by Greitens. Gardner withdrew her indictment of Greitens when the judge ordered that Gardner herself would have to testify in the case. Additionally, evidence is mounting that Sneed conspired with Gardner to conceal prosecutorial misconduct.

In the course of pursuing charges against Greitens, Gardner hired former FBI agent William Tisaby. Tisaby has been charged with seven felonies for perjury and evidence tampering in the Greitens case. Tisaby’s trial was slated to begin June 26, 2020 while Circuit Attorney Kim Gardner remains under active criminal investigation for her allegedly illegal efforts to oust the Republican Governor.

After a 20-month investigation, the Missouri Ethics Commission in Feb. 2020 “found no evidence of any wrongdoing by Eric Greitens” and the governor who was forced to resign amid unsubstantiated allegations was fully exonerated.

“It’s clear that a Soros prosecutor and establishment insiders were desperate to overturn the 2016 election and this is just one more alleged example of the kind of perjury, evidence tampering and lies that they engaged in. We knew that national liberals and insiders were coming after us. Now it’s good that the whole world is beginning to see the truth. The best thing that I can do and the best thing that conservatives and outsiders can do is to continue to fight, continue to serve, continue to make a difference. Soros, prosecutors like Kim Gardner who he funds, and the establishment – they will be relentless and continue to attack us. No matter the damage that they do – no matter the difficulties that they put in front of us – we have to find ways to continue to fight.”[32]

In 2017, after Jason Stockley, a white police officer, was found innocent in the death of Anthony Lamar Smith, an African American man, Antifa radicals and anti-police activists descended on Missouri from around the country. Greitens successfully kept the peace through strong support for law enforcement and the facilitation of peaceful protests.

The term "Missouri" comes from an Algonquin word roughly translating to "river of the big canoes".[33]

The state Constitution of Missouri, like all of the other 50 states, acknowledges God or our Creator or the Sovereign Ruler of the Universe. It says:

We, the people of Missouri, with profound reverence for the Supreme Ruler of the Universe, and grateful for His goodness, do establish this Constitution for the better government of the state.

Due in part to being both the home of Anheuser-Busch's flagship brewery and many wineries, the state has minimal regulations on alcohol sales (with very few exceptions, no local jurisdictions can pass harsher laws than the state, and almost any business with permits can sell any type of alcohol). It also has extremely few regulations on tobacco use.

St. Louis hosted the World's Fair in 1904, where the ice cream cone was invented[34] as well as the Olympic Games that year (before they were as popular as today).

The mule is the state animal.