Stevenson was born into a political family, his grandfather Adlai Ewing Stevenson was Vice President under President Grover Cleveland from 1893-1897, and his father was Secretary of State of Illinois. After serving in the United States Navy, Stevenson graduated from Princeton University and attended Harvard and Northwestern University law schools. In 1927 he joined a law firm in Chicago, Illinois.

Stevenson worked in Washington D.C. from 1933-1934 as Agricultural Adjustment Administration of Franklin D. Roosevelt's "New Deal." He returned to Washington from 1941-1944 to serve as special assistant and personal counsel to Secretary of the Navy Frank Knox. Since Knox was a figurehead who played little role in running the Navy, Stevenson's role was minor.

In 1948 Stevenson was elected Governor of Illinois by the largest plurality in the State's history. He was credited for advancing the public highway system, amending mining laws, and implementing a merit system in the state police department.[1] In 1949, Governor Stevenson testified before the House Committee on Un-American Activities to defend Alger Hiss, a former high ranking State Department official that was later found to be a Soviet spy.[2] 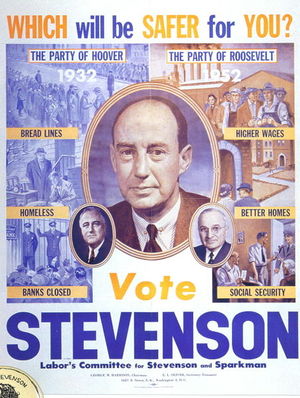 After President Harry S. Truman was forced out of his reelection campaign by poor results in the first primary, Stevenson opted out of running for a second term as Governor and sought the Democrat nomination for President.

Stevenson won the nomination primarily because the Democratic party was politically and morally exhausted after two decades in power. The Republican attacks on Truman's failures regarding Korea, Communism and corruption were so devastating that no Democrat had a reasonable chance of winning in 1952. Stevenson's base consisted of the intellectual wing of the Democratic party, big city bosses who admired his cooperation with the machine in Chicago, and white southerners who approved his avoidance of civil rights issues and Stevenson's choice of an Alabama segregationist as his running mate. Labor unions, minorities and the core of the New Deal Coalition, the blue collar working class, never found him attractive; many voted for the charismatic Republican Dwight D. Eisenhower.

Joseph Alsop labeled Stevenson an "egghead" for his liberal politics, high forehead, and baldness. Liberals praised Stevenson for his depth, intellect, and witty speeches; they were unable to praise his middle-of-the-road policies.[3]

Stevenson was unable to use television as effectively as Eisenhower, and was unable to mobilize the New Deal Coalition. He lost to Eisenhower 55%-45%. He only won 9 states in the south and 89 electoral votes.

The Democratic party, bereft of major candidates, made do a second time with Stevenson in 1956. He was a bit more energetic and warned that Eisenhower was too old to live out his term (yet Eisenhower outlived Stevenson). With the economy prosperous and the world dangerous, Eisenhower won by an even larger landslide. Stevenson permitted the convention delegates in 1956 to choose the vice-presidential candidate. In a narrowly-divided contest, Senator Estes Kefauver of Tennessee, Stevenon's former intra-party rival, emerged with the nomination over Kefauver's senatorial colleague, John F. Kennedy of Massachusetts.

Stevenson reluctantly supported Irish Catholic John F. Kennedy for President in 1960. Kennedy disliked Stevenson and appointed him to the visible but powerless job as the U.S. representative to the United Nations. Stevenson's dovish advice was ignored by Kennedy during the 1962 Cuban Missile Crisis. Stevenson however showed his patriotism to his country while serving on the UN Security Council during the Cuban Missile Crisis. Questioning the ambassador to the Soviet Union, Stevenson demanded to know whether or not the Soviets were placing missiles in Cuba quoted as saying "Don't wait for the translation, yes or no!". Frustrated by the lack of honesty and an answer coming from the Soviet ambassador, Stevenson famously said "I am prepared to wait for my answer until Hell freezes over, if that's your decision". Afterwards Stevenson continued to provide evidence that the Soviets were in fact installing missiles secretly in Cuba in front of the UN. Stevenson died from a heart attack on July 14, 1965.