Kimberly M. “Kim” Gardner (born 1975) is the Marxist prosecutor elected circuit attorney[1] of St. Louis in 2016. Gardner was criticized ahead of the election for releasing a political ad paid for by the Safety and Justice Super PAC that received funding from liberal billionaire George Soros, according to the St. Louis Post-Dispatch.[2] The total funds donated by the super PAC were at least $190,750. It was not immediately clear what her campaign budget was or who else contributed. Gardner won her 2020 primary re-election bid while under criminal investigation.[3] Gardner is a member of the Democratic Party.

The Post-Dispatch sued Gardner’s office in 2019 over her office’s refusal to release copies of contracts with vendors. A judge ruled in the paper’s favor in April 2020, but the paper said Gardner’s office has not yet fully complied.[4]

Gardner was sued again for at least the third time in July 2020 over the state’s Sunshine Law, an open records law that requires the government to respond within three days to requests for public records, the Post-Dispatch reported. The lawsuit claims Gardner’s office failed to fulfill an April 23 open records request for data on case statistics, dismissal data and staffing totals, the paper said. Her office responded in a letter May 12, according to the paper, saying more time was needed to fulfill the request due to the coronavirus.[5]

Evidence indicates the woman who made false allegations against former Missouri Governor Eric Greitens was bribed to willfully lie under oath and engaged in extensive perjury in an effort to oust the rising Republican star from office. Katrina “Kitty” Sneed, testified under oath that she secretly met with Kim Gardner in a hotel room in January and February of 2018. Gardner was the prosecutor in the case against Eric Greitens (shown above) that lacked sufficient evidence.

Following the secret meeting, Gardner charged Greitens with felony invasion of privacy in February 2018 for allegedly taking nude a photograph of Sneed without her consent and threatening to use the photo for blackmail. Greitens denied the allegations and Gardner never produced any evidence.

Sneed claimed during the deposition that the meeting with Gardner prompted her to come forward with a series of allegations against the then-Missouri Governor. When questioned under oath Sneed admitted she was reluctant to testify because she might have been remembering her accusations “through a dream.” When subsequently deposed, Sneed claimed she had never seen the photograph Greitens allegedly had taken of her and that at the time she also saw no phone or camera to take the photograph.

During Greitens’ felony invasion of privacy trial in May 2018, a forensic examiner extracted data from Greitens’ cellphone and email account. The examination revealed no photograph of Sneed was ever taken or deleted by Greitens. Gardner withdrew her indictment of Greitens when the judge ordered that Gardner herself would have to testify in the case. Additionally, evidence is mounting that Sneed conspired with Gardner to conceal prosecutorial misconduct.

In the course of pursuing charges against Greitens, Gardner hired former FBI agent William Tisaby. Tisaby has been charged with seven felonies for perjury and evidence tampering in the Greitens case. Tisaby’s trial was slated to begin June 26, 2020 while Circuit Attorney Kim Gardner remains under active criminal investigation for her allegedly illegal efforts to oust the Republican Governor.

After a 20-month investigation, the Missouri Ethics Commission in Feb. 2020 “found no evidence of any wrongdoing by Eric Greitens” and the governor who was forced to resign amid unsubstantiated allegations was fully exonerated.

As a result of her misconduct in the Greitens case (including lying under oath), as well as little to no action against criminals on her part for ideological reasons, rejection of criminal cases based on her false claims of the St. Louis police being "racist" and her release without charges of all of the rioters involved in the George Floyd riots in St. Louis in 2020, the Missouri State Disciplinary Counsel found probable cause that she engaged in 62 acts of misconduct that resulted in 79 false representations during prosecution of Eric Greitens[8] and may be disbarred as a result.[9]

Gardner allowed the release of all 36 rioters and looters arrested in the city following riots in which a retired Black St. Louis Police Captain, David Dorn was murdered by Black Lives Matter protesters.[10] The Marxist liberal activist leading the mob stood outside the home of Mark and Patricia McCloskey with a bullhorn screaming, "You can't stop the revolution!" Weeks later the same Marxist activist, Cori Bush, won the Democrat primary nomination for the 1st district of Missouri for a seat in the U.S. House of Representatives from the City of St. Louis, effectively winning the general election.[11] Gardner indicted the married couple for exercising their 2nd Amendment rights on their own property when they were assaulted and threatened by white Black Lives Matter terrorists.[12] 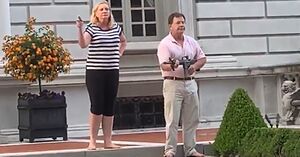 Gardner charged the McCloskey's of St. Louis with weapons charges for defending their home.[13]

Gardner was disqualified from prosecuting a St. Louis couple, the McCloskey's, who defended their home with firearms when assaulted by Black Lives Matter terrorists. Gardner was found to have initiated a "criminal prosecution for political purposes" following reports that she used the charges to send out fundraising emails for her reelection bid.[14]

In May 2021, Mark McCloskey announced his candidacy for the U.S. Senate to replace retiring Sen. Roy Blunt.[15]

Gardner's office failed to appear in court in the case of a convicted felon charged with first-degree murder, armed criminal action and unlawful gun possession. After Gardner's office missed three court hearings, the judge was forced to drop a murder case because no-one other than the defense, a public defender, showed up in court.

The judge wrote, “The court does not take this action without significant consideration for the implications it may have for public safety. Although presumed innocent, defendent has been charged with the most serious of crimes."[16]