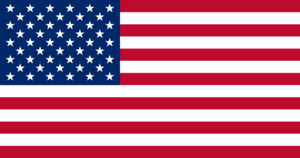 The flag which unites all American citizens

Leftists in recent years have attacked this meaning, claiming that all the residents of North and South America are just as much Americans. They claim that people in Latin America are offended. They want no one to use the term.

The term "North America" usually refers only to the U.S. and Canada, but sometimes Mexico is included, as in the "North American Free Trade Agreement" (NAFTA).

In Spain, the Spanish term "Americano" means someone who lived in Spanish Latin America and has now returned to Spain.

The term "Latin America" (and "Latin American") was invented by the French in the 1860s as part of their goal of controlling Mexico. The term has caught on and usually means the resident of any Spanish or Portuguese speaking country south of the United States.