The United States Department of State (or State Department) is a Cabinet-level agency of the United States government that deals with foreign affairs. The DoS falls under the Secretary of State's administration. Their headquarters is located in the Harry S Truman Building in Washington, DC, and this is a central part of the Deep State particularly with respect to foreign policy.

Its nickname is Foggy Bottom, a reference to its neighborhood and the name of its Metro stop in Washington, D.C., with a hint of muddled fogginess.

Shortly after the Constitution was created it became clear that the President would need an executive department to support his foreign affairs.

The history of American foreign policy shows periods of presidential control and periods where the State Department shaped policy.

Sundance of theconservativetreehouse describes the modern State Department as such: 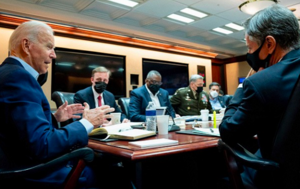 With 40,000 Americans stranded,[6] Blinken's State Department demanded $2,000 for a ride out of the country while Afghans rode for free.[7] The U.S. Embassy consular services department sent a document with instructions to assist Americans and eligible Afghans claiming Special Immigrant Visa (SIV) status. The document looks exactly like an approved VISA document except there is no filled in name, no serial number and no barcode. The document is easily able to be forged.[8]

American embassy staff in Afghanistan were apprised by the State Department to leave the embassy and make their way to Kabul airport. Staffers reported being jostled, hit, spat on and cursed at by Taliban fighters at checkpoints near the airport. Some staff members reported that they were almost separated from their children, while others collapsed in a crush of people and had to be taken to hospitals with injuries. Others said they had collapsed on the road because of heat exhaustion. “It would be better to die under the Taliban’s bullet” than face the crowds again, a staff member was quoted as saying in a State Department cable. “Happy to die here, but with dignity and pride," according to NBC News.[9] A heart-wrenching audio clip of a stranded American woman in fear for her life was posted to social media.[10]

On August 25, 2021 the State Department and U.K. officials issued a warning to American and British citizens to leave the vicinity of the Kabul airport immediately.[11] At least 24 students from San Diego school district and 16 parents had tickets to fly out but were not able to get to the airport.[12]

On August 28, 2021 it was reported that the Biden regime was refusing to help Americans stranded in Afghanistan.[13] The Biden regime ordered the airport gates closed, and refused to allow Americans outside the gate fleeing Taliban terror to escape the Taliban terror. Rep. Ronny Jackson of Texas reported, “They have been beaten by the Taliban at check points and told to leave and come back with large sums of money. Biden is going to get them killed!"[14] Rep. Andy Kim of New Jersey (D-NJ), tweeted,

The Department of State is supposed to develop and implement the President's foreign policy around the world. The DoS also supports other U.S. Government agencies that are active in foreign affairs, such as the U.S. Department of Commerce, the U.S. Agency for International Development and the intelligence community.

The purpose of the Department of State should include: