General George Smith Patton Jr. was a celebrated and controversial American general in World War II, famed for his successes in armored warfare against the Germans in 1944–45. His public image of tough-minded courage in battle remains fixed in the popular image of the war. Historians estimate that Patton's Third Army caused an astounding 55% of all of Germany's casualties at the Battle of the Bulge, while Patton's own men suffered only 9% of the losses on our side.[1]

Patton served in the American Expeditionary Forces in France in World War I as a senior tank officer. In World War II, he commanded U.S. Army invasions of North Africa (1942–43) and Sicily (1943). He perfected the art of lightning-fast tank maneuvers and unrestrained aggression, and he was the only Allied leader feared by the Germans. Prior to being deployed in North Africa, Patton led his men in war games in Atlanta that were supposed to last for many days. Patton's innovative tactics and the unbridled enthusiasm of his men enabled him to win the games in just a day or two. Patton inspired a unique loyalty and spirit in his men that enabled his troops to win quicker and with fewer casualties than anyone else.

Liberals hated Patton and feared that, after defeating the Germans, he would then push the communist Russian forces out of Eastern Europe. Given Patton's brilliance as a general, the liberals' fear was right, for once. Exploiting an exaggerated incident whereby Patton slapped a wounded soldier, liberal military leadership gave Patton command in 1944 of a 'fake' army designed to fool the Germans as to where the invasion of France would take place. He was then given command of a major unit, the Third Army, pushed the Germans out of France, defended and counterattacked at the Battle of the Bulge, then rolled through Germany in 1945. He died in an automobile accident. Patton has a very high visibility as a gruff, no nonsense, attacker who promoted armored force as they key to mobility and victory. His lightning-fast tank maneuvers shocked even the inventors of blitzkrieg.

Patton was born on a ranch in San Gabriel, California, and was homeschooled. His wealthy southern family had a history of fine military service and his grandfather was an American Civil War hero. He attended Virginia Military Institute and the U.S. Military Academy at West Point, receiving his commission in the cavalry in 1909.

Patton served with General John J. Pershing in Mexico and accompanied him to France in the American Expeditionary Forces (AEF) upon American entry into World War I in 1917. There he showed interest in the mobility and firepower of a new invention, tank, capable of crossing trenches, pushing through barbed wire, and shielding soldiers inside from machine gun bullets and (some) artillery fragments. He established a tank training school (the couterpart of a traininbg center run by Dwight D. Eisenhower in the States). Patton organized the First Tank Brigade, which he commanded in the St. Mihiel and Meuse-Argonne offensives. Wounded during the latter action, he saw no further active service in World War I.

George Patton in France in 1918

Between the wars, Patton recognized the advantages of the tank but his superiors did not; the tank units were disbanded and he was reassigned to the cavalry.

At the outbreak of World War II, as commander of the Second Armored Division and the First Armored Corps, he oversaw the training of the Armored Force. In November 1942 he led the Western Task Force in Operation Torch, the Allied landings in North Africa; later he commanded the Second Corps in Tunisia. In July 1943 he led the newly formed U.S. Seventh Army in the attack on Sicily. His name became a byword for aggressive fighting and unexpected maneuvers. Although Patton had seen many cases of shell-shock, he was disgusted when one healthy-looking soldier was hospitalized, struck him, called him a coward, and talked of shooting him. News reporters, who admired Patton, covered up the story but the hospital doctors complained to his superior, Eisenhower. Eisenhower almost sent Patton home in disgrace and when the news broke the Army was embarrassed to be associated with brutality. Patton was made commander of a fake army operating in England that fooled the Germans into deciding the Allied invasion would come at Calais, far east of the actual landing point in Normandy. After the landings succeeded, Eisenhower gave Patton command of the Third Army, reporting to Patton's former subordinate Omar Bradley.

On August 1 his Third Army poured through the breach in the German lines made by the First Army near St. Lô. The ensuing rapid sweep through Brittany and across northern France often defied logistic difficulties, especially the constant shortage of diesel fuel for tanks and trucks. The Third Army continued to play a major role in the winter fighting, helping stem the German counteroffensive in the Ardennes called the "Battle of the Bulge.". In the final offensive Patton struck boldly and suddenly across the Rhine after a blitz encirclement of the Saar Basin and advanced across central Germany. He secretly sent a rescue mission to liberate a POW camp that contained a relative of his; the raid was a total failure. Overall, his Third Army defeated 1,800,000 Germans, with lower casualty rates than any other army in World War II.

Near the end of the war, he developed a plan to liberate Czechoslovakia from Communist rule. Given his success in crushing the stronger Germans, Patton's offensive would have easily routed the dilapidated Red army and prevented the Cold War. Liberals in the United States feared he would win, so they convinced Eisenhower to stop him from attacking.

He attained four-star rank shortly before the end of the war. He died Dec. 21, 1945, after an automobile accident, and was buried in the U.S. military cemetery at Hamm, Luxembourg.

Patton also perfected the art of lightning-fast tank maneuvers and unrestrained aggression. He was first given control over the 3rd Cavalry which was transferred into a tank division. Once Patton led his men in war games in Atlanta that were supposed to last for many days. Patton's aggression and the enthusiasm of his men enabled him to win the games in just a day or two. Patton inspired a unique loyalty and spirit in his men that enabled his troops to win quicker and with few casualties than everyone else. A German profile once said he could swear like a stable boy, but be as complimentary as a king. Patton had no part of the D-Day landings because he was in temporary disgrace after slapping a shell-shocked US soldier while visiting a military hospital during the Sicily campaign. Just six months after the war in Europe ended, Patton died in a car crash in Berlin, Germany in 1945 on his way to lunch with a friend.

Patton's fame derives primarily from his record as an outstanding practitioner of mobile armored warfare. Quick-tempered and bluff in speech, he was frequently involved in political controversy, not least because of his propensity to racist and anti-Semitic remarks. He was nicknamed "Old Blood and Guts" by his men, who disliked his minute attention to dress codes even in battle zones. Patton's war diary was published posthumously in 1947 under the title "War As I Knew It." 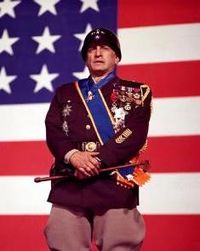 George C. Scott as Patton in the 1970 film; unlike the gravel-voiced Scott, Patton spoke with a falsetto: [1]

Patton became famous to new generations due to an Oscar-winning 1970 movie starring George C. Scott in the title role. It is a biographical film, based based on the books Patton: Ordeal and Triumph, by Ladislas Farago, and A Soldier's Story, by General of the Army Omar Bradley (Bradley served as technical adviser in the film, and was himself played by Karl Malden). The opening scene is one of the most familiar in film history, with Patton standing before a large American flag and delivering a speech to unseen troops based upon one he gave on June 5, 1944,[2] yet sanitizing away several of the obscenities. Patton used harsh and foul language and castigated cowards, or "psychoneurotics," and those who used self-inflicted wounds to get out of combat. The basic message was "shoot and keep shooting,"[3] keeping with the General's standing order of "Always take the offensive; never dig in." This movie even had to tone down the strength of Patton's real speeches, in order to make them palatable to a general civilian audience.

The movie was originally filmed and presented on 70mm wide-screen film, and had a dimension of spectacle which cannot be fully appreciated in home video. Directed by Franklin J. Schaffner and originally distributed by 20th Century Fox, Patton won seven academy awards including "Best Picture." Critic Roger Ebert said it was "released at the height of the unpopular war in Vietnam, was described by many reviewers at the time as "really" an anti-war film. It was nothing of the kind. It was a hard-line glorification of the military ethic, personified by a man whose flaws and eccentricities marginalized him in peacetime, but found the ideal theater in battle. In this he was not unlike Churchill; both men used flamboyance, eccentricity and a gift for self-publicity as a way of inspiring their followers and perplexing the enemy. That Patton was in some ways mad is not in doubt--at least to the makers of this film--but his accomplishments overshadowed, even humiliated, his cautious and sane British rival, Montgomery."[4]