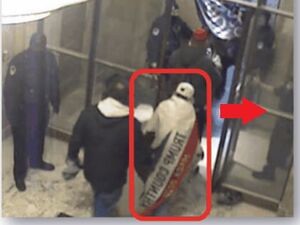 During hearings to become the chief prosecutor for the Biden junta, Merrick advanced the preposterous notion that Antifa and Black Lives Matter violent assaults on federal facilities and courthouses may not be domestic terrorism because they happened at night.[2] Weeks after the seizure of power, Garland and Biden lifted President Trump's ban on harassment of political opponents and executed a warrant on former New York Mayor Rudy Giuliani to seize electronic devices with names and cell phone number's of all Giuliani's contacts.[3] Giuliani led the challenges to Democrat election fraud after the 2020 presidential election.[4] Additionally, Giuliani had in his possession damning evidence related to the Biden family corruption scandals.[5]

Two days prior to the seizure of Giuliani's electronic devices, it was reported that the FISA Court determined Obama era FISA abuse was ongoing.[6] Edward Snowden described in detail how Obama FISA abuse worked to illegally surveil political opponents, elected officials, and judges for blackmail purposes, promote fake news and propaganda, and interfere in elections.[7]

In July 2021 Garland officially banned any further investigations into illegal leaks coming from the intelligence community to shape domestic narratives and influence public opinion.[8] Prior to the ban, leaks by government employees were punishable by up to 10 years in prison.

After the failure of the Democrat's H.R. 1 election rigging bill in the 117th Congress, Garland threatened to use the corrupt Biden junta DOJ apparatus of the administrative state to interfere directly in state elections.[9] Arizona Attorney General Mark Brnovich instructed Garland and Deputy AG Lisa Monaco after their public threats to intervene in state election audits:

In June 2021 Garland moved to nullify state laws that require voters to prove they are eligible to vote.[11]

The Garland DOJ dropped charges against five Chinese military researchers accused of concealing ties to the Chinese military.[12] In China, there is no distinction between civilian and military science and technology research.[13] The cases levied against biomedical and researchers in California and a doctoral candidate studying artificial intelligence in Indiana. One case included a researcher who was detained after taking refuge in the China consulate in San Francisco.

GOP Conference chair Elise Stefanik released a statement criticizing the junta DOJ for failing to hold Cuomo accountable. Cuomo is still the subject of two probes by the FBI and Brooklyn U.S. Attorney’s Office. “This decision from President Biden’s Department of Justice makes President Biden complicit in the criminal corruption scandal and coverup of deaths of thousands of vulnerable seniors."[14]

Intimidation and harassment of parents of schoolchildren

The National School Board Association (NSBA) sent a letter to Joe Biden complaining about parents speaking out at school board meetings. The NSBA letter states that parents’ protests and speeches at school board meetings “could be equivalent to a form of domestic terrorism.” Biden handed the letter to Garland. Garland issued a memo directing the FBI and numerous other federal and state agencies to take “measures designed to address the rise in criminal conduct directed toward school personnel,” a clear example of the politicization of the Department of Justice. A liberal advocacy group sent the Office of the President a letter; Merrick Garland dutifully turned that letter into DOJ policy.

The memo's intent is to intimidate parents to not speak out at school board meetings against critical race theory.

Since assuming the position as the nation's chief procurator, Garland has been racked by conflicts of interest.

Garland apparently has a conflict of interest in his efforts to intimidate and harass parents of schoolchildren who protest leftist indoctrination at local school board meetings. Garland's son-in-law, Alexander “Xan” Tanner, has gotten rich peddling K-12 educational materials obsessed with “systemic racism, ”intersectionality," and white supremacy. Tanner is co-founder Panorama Education, a company that works with school boards to promote “culturally responsive training” and other ideas associated with critical race theory. According to Parents Defending Education, a nonprofit education watchdog group, Panorama received a $1.8 million contract from Fairfax County Public Schools to collect data from children.[15]

Jerry Dunleavy of the Washington Examiner reported,[16] “One workshop titled ‘SEL [Social Emotional Learning] as Social Justice: Dismantling White Supremacy Within Systems and Self’ is designed ‘to explore actionable strategies for using SEL as a vehicle for social justice and advocacy in your community,’” The Examiner reported that one of Panorama’s slideshows calls on activists to say “‘I affirm my intersectionality,’ alludes to ‘unconscious biases,’ and defines ‘systemic racism’ as ‘the systematic distribution of resources, power, and opportunity in our society to the benefit of people who are white.’” It encourages educators to “learn more about how Panorama centers the voices of community stakeholders to dismantle white supremacy and systems of oppression.”

Panorama boasts it "supports 13 million students in 21,000 schools." Facebook founder Mark Zuckerberg’s Startup: Education co-led a $4 million round of seed funding for Panorama in 2013. In September 2021 Panorama announced a $60 million investment round with investors including the Chan Zuckerberg Initiative, which was deeply involved in 2020 election fraud.

Garland employed Maggie Goodlander as a law clerk while he was a federal judge.[17] Goodlander is the wife of Biden national security advisor Jake Sullivan. Sullivan has been deeply implicated in the probe by Special Counsel John Durham into the origins of the Trump-Russia hoax. In September 2021, Clinton campaign general counsel Michael Sussmann of the Perkins Coie law firm was indicted for fabricating claims about the Trump-Russia hoax to the FBI.[18] According to the New York Times, Sussmann was charged for lying to the FBI to hide the identity of the Clinton campaign as Sussmann's client while he pushed widely discredited claims about communications between Russia's Alfa Bank and the Trump Organization in the lead-up to the 2016 presidential election. The indictment reads,

Garland controls the purse strings to Durham’s investigation and whether his final report will be released to the public.[22]

As of 2021 Garland was serving as the chief judge of the D.C. Court of Appeals where he was first appointed in 1997.

In 1995, Garland was nominated to the U.S. Court of Appeals for the District of Columbia Circuit, and (following a delay in Senate confirmation) took the bench in 1997. Barack Obama interviewed Garland in 2009 and 2010 for two openings on the Supreme Court. Conservative Senator Trent Lott led a floor fight to oppose Garland's nomination to the D.C. Circuit in 1997, and 23 senators voted against his confirmation.[24]

Garland served as President of the Board of Overseers of Harvard University. He is currently a member of the Executive Committee of the Judicial Conference of the United States.[25]

On March 16, 2016, Obama nominated Garland to serve as an Associate Justice of the Supreme Court, to fill the vacancy created by the death of Antonin Scalia. On March 19, 2016, Presidential candidate John Kasich said in a Face The Nation interview that he would consider nominating Garland if he were elected President. The next day, he called the television show and told them that he had said that to be polite and that in fact he would not consider Garland for the Supreme Court.