For a detailed presentation, see Obamagate timeline, Barack Hussein Obama, Barack Obama Controversies#Wiretapping the 2016 election and List of names in the Obamagate scandal. The Obamagate controversy refers to several scandals during President Barack Obama tenure, notably the misuse of government agencies, media manipulation, illegal wiretaping, and domestic spying on American citizens to harass political opponents and critics. By the election year of 2016, Obama officials vastly expanded the use of the foreign intelligence gathering apparatus as a weapon against domestic political opponents. In 2013, there were 9,600 FISA search queries involving 195 Americans. But in 2016, there are 30,355 searches of 5,288 Americans.[1][2]

With the release of DOJ Inspector General Michael Horowitz's first installment report, it became abundantly clear the Obama intelligence community attempted to whitewash crimes Hillary Clinton was accused of and to meddle in the outcome of America's democratic processes.

Some have drawn parallels between Obamagate and the Watergate scandal of the 1970s; the FISA courts were created as a post-Watergate reform. Had the Watergate burglars been granted outside contractor access to the FISA database, it would make a closer comparison. In Watergate, Nixon turned to outside contractors, the Plumbers unit, after the FBI refused Nixon's request to spy on political opponents; in Obamagate the FBI colluded with outside contractors, FusionGPS, to spy on Obama and DNC opponents. In Watergate, the CIA declined Nixon's request to help cover up the crime by deceiving FBI investigators; in Obamagate, the CIA director masterminded the crime in collusion with the FBI and Department of Justice.

Mark Levin originally brought it to public attention, spotlighting in his radio broadcast mainstream media reports which cited the Obama administration's use of government agencies to spy on its political opposition — namely Donald Trump, his aides, and then-U.S. Senator Jeff Sessions, who was the Attorney General of the United States during the first half of Trump's elected four-year-term.[3]

National security expert Chris Farrell characterized the Obamagate scandal as "a titanic struggle for America's future," and former NSC staffer Michael Doran observes what is at stake is "a core principle of our democracy: that elected representatives control the government, and not vice versa."

Farrell warns if "Communications Intelligence is used as a partisan political weapon without people going to jail, we will have crossed the point of no return for institutional corruption in our government, our intelligence services and law enforcement."

Farrell summarizes the evidence collected by the United States House Intelligence Committee chairman which has been confirmed in writing, and to the press, that the Obama Administration conducted the following activities against President-Elect Trump and his team between November 2016 and January 2017 . . .

"This is illegal domestic political espionage on a scale never before imagined. It is, however, totally consistent with the Obama Administration’s weaponizing of the IRS, as well as other unlawful manipulations of government programs to fund the operations of political allies and non-governmental organizations," such as ACORN, Farrell concludes.[4]

Accessing the NSA database is the largest violation of basic constitutional protections against illegal search and seizure in American history. The surveillance of the 2016 Trump campaign, involves illegally using of the government’s most powerful tools of national intelligence and law enforcement against an opposition political party. These crimes directly attacked two pillars of constitutional democracy: (1) elections should be free and fair, not corrupted by the party in power, and (2) law enforcement and intelligence should never be used as partisan instruments.

The scandal also attacked yet another pillar of constitutional democracy: the peaceful transfer of power to a new administration. Handing government authority to the opposition party is a hallmark of stable democracy. Much as the Obama administration hated to see Hillary Clinton lose, it was obliged to transfer power seamlessly to Donald Trump. On the surface it did so. Beneath the surface, it erected every obstacle it could.[5]

NSA Dir. Mike Rogers discovered FISA-702(17) “About Queries” were conducted by the FBI, “contractors” and “individuals”, for reasons that had nothing to do with national security and the FBI did not notify the FISA court for approval. The FISA-702 “About Searches” returned information on Americans. Those results were passed on to people outside government. Those 702 (American Citizen) results were not “minimized” and exposed the private data of the American citizens.

In addition, Dir. Mike Rogers discovered people within the intelligence community were doing “searches” of the NSA and FBI database that were returning information that had nothing to do with “Foreign Individuals”. Rogers requested a full FISA-702 Compliance Review. As an outcome of that review, the DOJ/FBI compliance officer noted FISA violations.

These ‘passed-along’ FISA-702 search results were used by Glenn Simpson, Mary Jacobs, and Nellie Ohr; “unmasked” by Obama administration officials; enhanced by Christopher Steele in the Steele dossier, and returned to the FBI Counterintelligence Deputy Peter Strzok, DOJ Deputy Bruce Ohr, and DOJ/FBI lawyer Lisa Page, for an “insurance policy” against the election of Donald Trump.

In October 2016 the DOJ and FBI then took the Steele dossier, full circle, back to the FISA Court to gain the most intrusive FISA Title I surveillance authority and approval upon the Trump Campaign and Donald Trump. Immediately after the DOJ lawyers formatted the information for a valid FISC application, the head of the DOJ National Secirity Division, Asst. Attn. Gen. John P Carlin, left his job. Carlin's exit came as the DOJ-NSD and NSA Dir. Mike Rogers informed the FISA court that frequent unauthorized FISA-702 searches had been conducted.

All the intelligence information the Obama DOJ and FBI collected via their illegal FISA-702 queries, combined with the intelligence FusionGPS created during their earlier contractor access to FISA-702(17) “about queries”, was the intelligence data delivered to Christopher Steele for use in creating the Steele dossier.

The executive order's history dates back to President Ronald Reagan. He signed the order into law in 1981, giving the intelligence community the ability to extend their powers and streamlining the ability of federal agencies also investigating intelligence issues, to cooperate with the CIA requests for information.

Obama sought to expand those powers and take down the wall during his second term in office. The original executive order only allowed limited personnel - those with the highest levels of security clearances - to view the original raw data.

But the changes came at the end of his presidency. On Jan. 3, then Attorney General Loretta Lynch signed the expansion of the executive order, which had already been signed by DNI James Clapper in mid-December.

For many years the executive order didn't draw a lot of attention, but NSA whistleblower Edward Snowden exposed its vast reach.

Snowden, who is being sought by U.S. authorities for leaking classified information and is now in Russia, was the catalyst that exposed the vast authority of the NSA by revealing how the agency is capable of retrieving and storing vast amounts of what Americans considered private communications in their servers."[8] 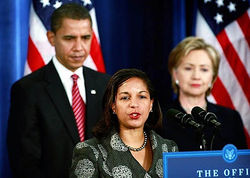 When the National Security Act of 1947 created the CIA, it's authors feared creating a Gestapo/KGB-like organization that could be used against enemies, both foreign and domestic. Thus a "wall of separation" was created between the FBI and CIA. The CIA was created to deal with foreign intelligence operations, and the FBI continued its domestic counterintelligence operations.

Gradually the CIA gained certain authority to conduct operations in the United States, such as training anti-Castro Cubans for the Bay of Pigs operation or the Mena Arkansas gun-running scheme. Likewise the FBI has been tasked to investigate "crimes" outside the United States, such as roadside IED attacks in Iraq which prevented a possible "Bowling Green Massacre" or the 1998 embassy bombings in Tanzania and Kenya.[9]

But Progressive Democrats came closest to realizing their age old dream of marshalling the police powers of the state, not for any legitimate counterintelligence or criminal prosecution, but for political and ideological reasons against their imaginary enemies and fellow citizens under President Barack Obama.

Liza Goitein of the Brennan Center for Justice explains the legal avenues under which the Obama administration pursued wiretaps on American citizens:[10]

Unmasking and leaks to demonize opponents

“Unmasking” is the process of identifying individuals whose communications were caught in the dragnet of intelligence gathering. While conducting investigations into terrorism and other related crimes, intelligence analysts incidentally capture conversations about parties not subject to the search warrant. The identities of individuals who are not under investigation are kept confidential, for legal and moral reasons.[12]

During the months of November and December 2016, and January 2017, members of the Trump campaign and transition team had their identities unmasked in surveillance transcripts on foreign dignitaries and information was gathered and disseminated within the government by the Obama administration under the guise of foreign intelligence surveillance, then selectively leaked to the media to give an unsubstantiated impression that a political opponent was illegitimate.

Dozens of times in 2016, those intelligence reports identified Americans who were directly intercepted talking to foreign sources or were the subject of conversations between two or more monitored foreign figures. Sometimes the Americans’ names were officially unmasked; other times they were so specifically described in the reports that their identities were readily discernible. Among those cleared to request and consume unmasked NSA-based intelligence reports about U.S. citizens were Obama's national security adviser Susan Rice, his CIA Director John Brennan and his Attorney General Loretta Lynch. Some intercepted communications from November to January involved Trump transition figures or foreign figures' perceptions of the incoming president and his administration. Intercepts involving congressional figures also have been unmasked occasionally for some time.[13]

The unmasking and public disclosure of an American citizen's identity which was acquired during surveillance of a foreign diplomat is a criminal act punishable by ten years in prison. Only 20 persons in the Intelligence Community have the ability to unmask a US citizen's identity in transcripts of conversations gathered in a surveillance on a foreign diplomat.[14] One person whose privacy and civil rights were violated was Michael Flynn, a private citizen at the time of the wiretapping. However, Flynn was National Security Advisor to the President of the United States at the time his name was feloniously leaked to the press and public by Obama appointees.

Law enforcement and intelligence agencies have exonerated Flynn of any wrongdoing,[15][16] however the leaking of his name coupled with fake news stories reported by the Washington Post and New York is strong evidence Flynn was the target of an illegal domestic spying operation intended to influence United States political processes, public opinion, policies, or media.[17]

In Obamagate, a marked pattern has emerged in using the foreign intelligence apparatus of the United States to harass domestic opponents. This has occurred under the guise of US foreign policy - showing favoritism to China while impugning advocates for peace with Russia. Beginning with the Chinagate scandal and the Trans Pacific Partnership (TPP), Progressives have slowly taken control of the Military-industrial complex now centered in Silicon Valley. Russophobia is the focus of their demonizing efforts because of Russia's stand against gay marriage and the homosexual agenda.