Weissmann donated $2,300 to the Obama Victory Fund in 2008, $2,000 to the DNC in 2006 and at least $2,300 to the Clinton campaign in 2007. He was at Hillary Clinton headquarters on election night and is part of the anti-Trump Resistance. Weissmann is alleged to have committed the felonious act of leaking the Roger Stone search warrant to CNN before it being served.[1][2] After he was fired upon completion of the Mueller probe,[3] Weissmann went to work for the Brennan Center at New York University (NYU).[4][5] 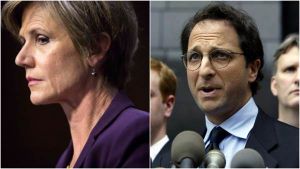 Clinton operatives Sally Yates (left) and Andrew Weissmann (right).[6][7][8] Yates was referred for criminal investigation for her role in the Obama administration's FISA abuse scandal.[9] Weissman praised Yates for her leadership of the Resistance.[10]

Weissmann was FBI director Robert Mueller’s special counsel in 2005, and the FBI's general counsel in 2011. He has served as an assistant U.S. attorney for the Eastern District of New York (EDNY). In 2015 he headed the criminal fraud section at DOJ. Weissmann has taught at NYU School of Law, Fordham Law School, and Brooklyn Law School.[11] On June 19, 2017 he joined the Mueller team in the Spygate coverup.[12][13][14] and jointly led the case against Paul Manafort and Rick Gates.

Vadim Mikerin, director of Tenex, plea agreement shows that the Obama DOJ’s Fraud Section was then run by Andrew Weissmann.

The Justice Department instructs prosecutors that when Congress has given a federal offense its own conspiracy provision with a heightened punishment (as it has for money laundering, racketeering, narcotics trafficking, and other serious crimes), they may not charge a section 371 conspiracy. Section 371 is for less serious conspiracy cases. Using it for money laundering — which caps the sentence below Congress’s intent for that behavior — subverts federal law and signals to the court that the prosecutor does not regard the offense as major.

Yet, that is exactly what Rod Rosenstein's office did, in a plea agreement his prosecutors co-signed with attorneys from the Justice Department’s Fraud Section. (See in The Hill’s report, the third document embedded at the bottom, entitled “Mikerin Plea Deal.”) No RICO, no extortion, no fraud — and the plea agreement does not to mention any of the extortions in 2009 and 2010, before Committee on Foreign Investment in the US approved Rosatom's acquisition of Uranium One. Mikerin just pled guilty to a nominal “money laundering” conspiracy charge, insulating him from a longer sentence. Thus, he got a term of only four years’ for a major national security crime.

In September 2020 it was reported that U.S. Attorney John Durham was investigating 2016 efforts from Main Justice DOJ to block FBI efforts to investigate the Clinton Foundation. The New York Times reported that “top Justice Department officials denied a request in 2016 from senior FBI managers in Washington to secure a subpoena.” NYT said that “the decision frustrated some agents who believed they had enough evidence beyond the book [Peter Schweitzer's Clinton Cash], including a discussion that touched on the foundation and was captured on a wiretap in an unrelated investigation.”[15] Andrew Weissmann was at the time chief of the DOJ Criminal Division Fraud Section (FSCD) which oversees prosecutions relating to the Foreign Corrupt Practices Act (i.e. bribery that crosses borders).

In 2016 and 2017 Weissmann was regularly briefed by DOJ official Bruce Ohr who was carrying information from Fusion GPS and Christopher Steele to the FBI after Steele was fired as an FBI informant for violating FBI regulations.[16] Weissman did not report the illegal activity to his superiors as departmental regulations require.[17] Weissman was appointed lead prosecutor in the Mueller investigation to cover up the FBI's 2016 illegal spying on Team Trump.[18] Weissmann is suspected in illegal leaks from the Mueller probe.[19]

Disgraced Deputy Asst. Attn. Gen Bruce Ohr informed Weissmann about his activities with Christopher Steele during the transition and after President Trump took office.[20] Ohr made these disclosures to Weissmann before Weissmann joined special counsel Robert Mueller's investigation.[21] The Mueller Team knew of Ohr's involvement with the 2016 Clinton campaign's Steele dossier hoax from the start of the Special Counsel investigation.

Weissmann is a principal author of the Mueller report.

Weissmann prosecuted the Big 5 accounting firm Arthur Andersen LLP. Weissmann argued that Arthur Andersen had covered up for Enron and convinced the judge to instruct the jury that they could convict the firm regardless of whether its employees knew they were violating the law. That ruling was later overturned by the Supreme Court in a 9-0 ruling, in which the court held that "the jury instructions failed to convey the requisite consciousness of wrongdoing."[22] 85,000 jobs were destroyed by indicting the whole company and not just its board of directors.[23] Kathryn Ruemmler worked with Weissmann on the case.