Many have criticized the misuse of DOJ to persecute Trump advisers. In one example, DOJ prosecutors initially sought a shockingly long prison sentence of seven to nine years for Roger Stone, which even the presiding judge criticized.

The Judiciary Act of 1789, (ch. 20, sec. 35, 1 Stat. 73, 92-93, 1789) created the Office of the Attorney General. Originally a one-person part-time position, the Attorney General was to be "learned in the law" with the duty "to prosecute and conduct all suits in the Supreme Court in which the United States shall be concerned, and to give his advice and opinion upon questions of law when required by the President of the United States, or when requested by the heads of any of the departments, touching any matters that may concern their departments." The workload quickly became too much for one person, necessitating the hiring of several assistants for the Attorney General. With an increasing amount of work to be done, private attorneys were retained to work on cases.

When disgraced FBI Director James Comey made inappropriate public announcements about the Clinton email server scandal, the credibility of the bureau was compromised. Several former attorneys general contacted by Deputy Attorney General Rod Rosenstein, agreed (across party lines) that Comey should be fired for his poor handling of the affair. Trump gave Comey plenty of time to apologize, but he wouldn't budge. So after Congress quit stalling on the appointment of the new Attorney General - and his assistant (who enjoys bipartisan support) - the Justice department took only two weeks to come up with its recommendation to fire Comey based on a memo by Rosenstein. Trump, then, finally fired him.

The Federal Bureau of Investigations is the investigatory arm of the Department of Justice, reporting to the assistant attorney general. For example, the FBI office in Cincinnati has a website and considers internet-related crimes to be a priority.[1]

Since assuming the position as the nation's chief procurator, Merrick Garland has been racked by conflicts of interest.[2][3] In October 2021 a complaint was filed with the Office of Government Ethics (OGE) asking to open an investigation to determine whether Garland violated 5 C.F.R. § 2635.502, regulating recusal from matters involving the financial interests of relatives with whom an employee has a close personal relationship.[4]

Weeks after the seizure of power, chief procurator Merrick Garland and Biden lifted President Trump's ban on harassment of political opponents and executed a warrant on former New York Mayor Rudy Giuliani to seize electronic devices with names and cell phone number's of all Giuliani's contacts.[5] Giuliani led the challenges to Democrat election fraud after the 2020 presidential election.[6] Additionally, Giuliani had in his possession damning evidence related to the Biden family corruption scandals.[7] The seizure of Giuliani's electronic devices with cell phone numbers and email contacts opened the door for further FISA 702 abuse. Two weeks before the seizure it was discovered Mary McCord (DOJ), who succeeded John Carlin as head of the DOJ-NSD during the corrupt Obama administration and submitted the fraudulent Carter Page FISA warrant to the FISA Court, was hired by FISA Court chief judge James Boasberg as Amicus Curiae.[8][9]

Two days prior to the seizure of Giuliani's electronic devices, it was reported that the FISA Court determined Obama era FISA abuse was ongoing.[10] Edward Snowden described in detail how Obama FISA abuse worked to illegally surveil political opponents, elected officials, and judges for blackmail purposes and to interfere in elections.[11] The home of Victoria Toensing was also raided.[12] Toensing, the wife of former D.C. US Attorney Joe diGenova, represented Dmytro Firtash and also whistleblower William J. Campbell in the Uranium One bribery scandal.

Rosanne Boyland was an unarmed peaceful protester who was reportedly beaten to death[13] by DC Metro Police officer Lila Morris at the J6 protests. Morris was seen on video beating Boyland with devastating force as Boyland lay unconscious on the U.S. Capitol steps. Fake news media reports attributed her death to a drug overdose. Philip Anderson, a victim of Antifa violence in San Francisco in the fall of 2020[14][15], held Boyland's hand at the time of her death.[16] A second eyewitness came forward and made an audio recorded statement to Jim Hoft of the Gatewaypundit.[17]

Ten months after the killing, the family was denied Roseanne Boyland's full autopsy report by the DC Medical Examiner’s office and the Biden Department of Justice. The Government of the District of Columbia Metropolitan Police Department also denied the family of Rosanne Boyland the video footage they posess showing her death after her father filed a Freedom of Information Act (FOIA) request to obtain it.

Rep. Louie Gohmert (R-TX) grilled chief procurator Merrick Garland under oath about Boyland’s death and the video showing Boyland being beaten and possibly killed by a DC Police Officer on the Capitol steps. Gohmert asked Garland if a determination was ever made to the DC Metro Police Officer who struck Rosanne Boyland repeatedly in the head with a rod before she died. According to The Gatewaypundit Garland proceeded to lie to the nation in front of the House Judiciary Committee. The Boyland family has since contacted the Department Justice and were told there was no such investigation.[18] 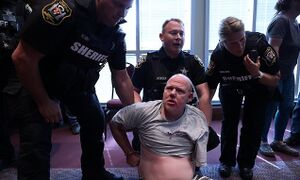 Scott Smith, a parent, was at a Loudoun County, Virginia school board meeting in June 2021 because his daughter had been raped by a transgender boy in the girls’ bathroom at Stone Bridge High School.[19] Smith was given a no-trespassing order prior to the meeting that forbids him from telling his story, part of an elaborative cover-up by the school district to not publicize the rape of his daughter. When Smith showed up at the school to complain about what had happened, they accused him of lying and called the police.[20]

The National School Board Association (NSBA) sent a letter to Joe Biden complaining about parents speaking out at school board meetings. The letter specifically cited the June 22, 2021 Loudoun County, Virginia incident as an example.[21] The NSBA letter states that parents’ protests and speeches at school board meetings “could be equivalent to a form of domestic terrorism.” Biden handed the letter to Garland. Garland issued a memo directing the FBI and numerous other federal and state agencies to take “measures designed to address the rise in criminal conduct directed toward school personnel,” a clear example of the politicization of the Department of Justice. A liberal advocacy group sent the Office of the President a letter; Merrick Garland dutifully turned that letter into DOJ policy.

In the early morning hours of November 6, 2021 the Biden FBI raided the home of Project Veritas founder James O'Keefe and seized his cell phone with his reporter's notes, privileged communications with lawyers, and confidential donor information. Within days, The New York Times published information from the cell phone.[23] Project Veritas filed a defamation lawsuit against the New York Times in October 2020 over a report on ballot harvesting by the Ilhan Omar campaign in Minnesota. The Times referred to Project Veritas' reporting as a "coordinated disinformation campaign".[24] Weeks before the FBI harassment, Project Veritas reported on the mega-pharmaceutical firm Pfizer having used aborted fetuses in development of its mRNA covid vaccine.[25] The raid was conducted under the purported theft of Ashley Biden;s diary, wherein she recalls taking "inappropriate" showers with her father, Joe Biden, as a young girl.[26] The judge ordered the New York Times ​to explain how they obtained access to the legal correspondence between O’Keefe and his attorneys.[27] Garland employed Maggie Goodlander as a law clerk while he was a federal judge.[29] Goodlander serves as counsel to Garland, who oversees Special Counsel John Durham's investigation. Garland has oversight of the Durham investigation.[30] Goodlander is the wife of Biden national security advisor Jake Sullivan. Sullivan has been deeply implicated in the probe by Special Counsel John Durham into the origins of the Trump-Russia hoax. In September 2021, Clinton campaign general counsel Michael Sussmann of the Perkins Coie law firm was indicted for fabricating claims about the Trump-Russia hoax to the FBI.[31] According to the New York Times, Sussmann was charged for lying to the FBI to hide the identity of the Clinton campaign as Sussmann's client while he pushed widely discredited claims about communications between Russia's Alfa Bank and the Trump Organization in the lead-up to the 2016 presidential election. The indictment reads,

Garland controls the purse strings to Durham’s investigation and whether his final report will be released to the public.[35]

According to a Freedom of Information request response issued by the Department of Justice, it appears there are indeed communications between Pfizer and the FBI about Project Veritas. The request for communications, filed by Judicial Watch, was acknowledged but denied by the DOJ which cited an exemption over law enforcement proceedings. “The FBI has completed its search for records responsive to your request. The material you requested is located in an investigative file which is exempt from disclosure[.]”

Project Veritas previously published videos of a Pfizer scientist discussing the strength of natural COVID-19 antibodies versus the vaccine with an undercover reporter. Then in October 2021, Project Veritas obtained internal company documents from a whistleblower which showed admissions from Pfizer management that aborted fetal cell lines were used in the company’s vaccine program, but that employees should just stick with Pfizer’s narrative omitting any mention of aborted fetal cell lines.[36]

Democrat Rep. Henry Cuellar represents Texas’ 28th Congressional District, which extends to the U.S.- Mexico border, had been very public and critical of how Joe Biden collapsed the U.S-Mexico border enforcement.[37][38] Cuellar's home and campaign office were the subject of an FBI raid on January 20, 2022.[39]