Philip Dru: Administrator: A Story of Tomorrow, 1920-1935 lays out in novel form many of the early goals of Progressivism.[1][2] When Colonel House first published Philip Dru in 1912, he did so anonymously.[2] For the author, the novel Dru provides an outlet to develop an utopian vision for a future order. However, like many utopian schemes, Dru presents for most a dystopian ordeal. 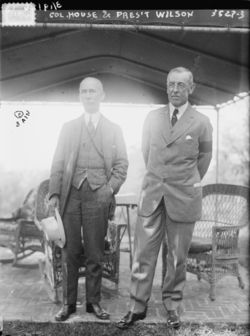 Some say that Wilson is the 'Philip Dru prototype'

President Woodrow Wilson is known to have been given a copy of Philip Dru[3] by Edward House, who was one of his most trusted advisers, to read while on a trip to Bermuda after winning the Presidency.

Wilson's Secretary of the Interior Franklin K. Lane noted the similarities between Wilson's governing style and the writings contained in the novel: "Colonel House's Book, Philip Dru, favors it, and all that book has said should be, comes about slowly, even woman suffrage. The President comes to Philip Dru in the end. And yet they say that House has no power...."[4][5]

Historian Paul Johnson notes that "in 1911 House had published a political novel, Philip Dru: Administrator, in which a benevolent dictator imposed a corporate income tax, abolished the protective tariff, and broke up the 'credit trust' - a remarkable adumbration of Wilson and his first term."[6]

House remarked of Dru: "Philip Dru expresses my thought and aspirations, and at every opportunity, I have tried to press rulers, public men and those influencing public opinion in that direction. Perhaps the most valuable work I have done in this direction has been in influencing the President. I began with him before he became President and I have never relaxed my efforts."[7]

In a book review for The New York Times, Walter Lippmann wrote of the novel and its anonymous author that "if the author is really a man of affairs, this is an extraordinarily interesting book".[8]

Historian Billie Jensen noted that it is not very often that a utopian reformer has an opportunity to be as influential as House was, with their visions of utopia implemented so soon relative to their creation. She concludes by pointing out that Philip Dru is a significant political document.[9]

Charles E. Neu, House's biographer, noted the deep ideological progressivism of House: "He(House) concluded that an extension of public authority and the use of expert knowledge were essential to ease the crises in American life."[10]

Senator Lawrence Sherman of Illinois talked about the book in congress, noting its substantial influence.[11] He said: "Here is exhibited the colonel's whole mental viscera. If there be twilight zones in the biography of 1918, the colonel's 312 pages of fiction flashed from the watchtowers of 1912 a searchlight athwart the gloaming so any wayfarer can see everything. Suffice it to know Philip Dru is an autobiography of the colonel himself and solves the Conundrum how to get rid of the Constitution."[12]

Philip Dru has been a favorite among conspiracy theorist websites that commonly refer to topics such as the New world order; organizations such as the Illuminati, the Bilderberg group, and the Trilateral Commission; families such as the Rockefeller and Rothschild family; and Round Table groups such as the Council on Foreign Relations (CFR).[13][14][15] The association of this book with these other topics misses the point of the book. While it has been accurately cast by such websites as a "Blueprint for Tyranny",[16] these other topics mixed in on these sites makes it hard to get an indication of what the book is really all about.

This superfluous association with conspiracy topics has the deleterious effect of preventing conservatives and others from reading a book which has a real educational value in the context of progressive ideology in general[1][2] and the era of the Wilson administration in particular.

After the book's initial release in 1912, it was re-issued into print in 1965 by the John Birch Society,[9] and again in 1998 by RWU Press. They currently offer the book as a freely downloadable PDF on the website of Robert Welch University.[17]

While doing research into the history of progressivism, Glenn Beck discovered and read Philip Dru.[18] He used both his then Fox broadcast show as well as his radio show to mainstream the novel, as well as having discussions about the book later on The Blaze.[19][20][21]

Even George Will has made comparisons[22] regarding Dru and progressivism, which had never happened before.

House tries to present the novel within a futuristic framework[23] of democracy and justice, where the more 'democratic' west engages in a civil war with the 'oligarchy' of the east.[24][25] However, the vision of Dru is largely technocratic, authoritarian, and progressive.[26] Philip Dru is, in short, a benevolent dictator.[27][28]

The opening chapter of the book places the reader at Philip's graduation from West Point military academy, and introduces several characters, including Gloria, a primary character for developing and diving into Dru's statist view points. The book has several chapters devoted to developing these viewpoints and takes the reader through a walk in the desert, a fictional sob story tied to a validation of income redistribution, and Dru's short-lived career as a writer for a nationally syndicated paper published out of New York.

While Gloria is out trying to win over converts to Dru's cause, she runs into a particularly shady senator. Gloria comes from a well-off family, and has access to people others may not have. She introduces Dru to the senator, to whom shortly afterwards the conspiracy that the senator was involved in becomes publicly known. This is where Dru becomes the general of some army originating out of Madison, Wisconsin.

Upon winning the war, Dru casts himself not as a dictator, but merely as an "administrator". The chief of the bureaucracies. His first administrative reform using experts and boards is of the judiciary. He appointed a second board of experts for the reform of laws. He had another board of experts for tax reform, a board for the incorporation of the states into the national government, and a board to deal with the "railroad problem". The old government is cast as a "negative government", a view that is widely held by progressives, even today.[29]

Philip Dru is the story's protagonist, who is presented as a child prodigy and a mastermind.[30] He was born to be an expert, and is an expert on all things. He is ready from day one to be your administrator.

Upon their first meeting, Gloria expected to see a "god-like", "beautiful" man. The story starts out after Dru is already fully grown so his childhood is not the subject, however Gloria's brother Jack has clearly set very high expectations. The book plays down Dru's physical appearance presumably because Dru's intellect and expertise are his primary offering.

Gloria is a character that serves as a developmental mirror, asking probing questions of Dru that push him in a certain direction. Dru and Gloria together act as one in driving the ideological narrative. Gloria comes from a wealthy family.

Toward the end of the book there are hints of a love interest between the two.

Jack is Gloria's brother, who introduces Gloria early on. He is present for the first portion of the story, but disappears once battle begins. He joins Dru's army, presumably in a leadership role of some kind.

At one point in the book, Jack describes Dru as follows: "He is a born leader of men, and he knows more about engineering and tactics than the Colonel and all the rest of us put together."

Jack, like Gloria, both exist to build Dru's technocratic preeminence and capability.

Senator Selwyn is the closest thing to an antagonist in the book, and for a few chapters he is the primary antagonist. He plots behind the scenes with John Thor in an attempt to secure a manchurian candidate, James R. Rockland.

Later in the story, Selwyn submits to Dru's will after losing the war.

John Thor is the other participant in "the conspiracy", who is presented to the reader as a plutocrat.[31]

While not a character, the real antagonist of the book is "the system": the nameless, faceless plutocratic oligarchy that Dru is to take care of. The combination of trusts and lack of regulation is the problem, and an administrator will solve the problems that can't be fixed by more traditional means. But its not tyranny, its just administration. That's what will fix everything. 
Bureaucracy and the administrative state are crucial pieces to progressive ideology, which is what makes the novel Dru key to understanding the views of progressives. Wilson's essay on The Study of Administration was a foundational article in the establishment of modern public administration.


Philip Dru's policies as the Administrator at the head of all of the bureaucracies are a reflection of the author's beliefs, in addition to the influence it had upon President Wilson.[32] Here is a summary of many of the major points:

Additionally, Chapter 48, An International Coalition, lays out a plan for an international organization with similarities to the League of Nations.

In the last 120 years, most of these policies have been supported and enacted by progressive legislators and presidents, with many of them directly enacted by President Wilson himself.

The strong will help the weak, the rich will share with the poor, and it will not be called charity, but it will be known as justice. And the man or woman who fails to do his duty, not as he sees it, but as society at large sees it, will be held up to the contempt of mankind.