Jefferson Beauregard "Jeff" Sessions III (born December 24, 1946) was the 84th United States Attorney General, serving under Republican President Donald Trump. Previously, he served in a variety of government positions, most notably as the junior United States Senator from Alabama from 1997 to 2017. 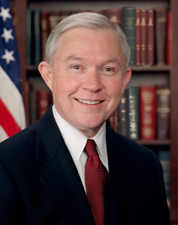 Sessions as US Senator

Sessions served as an Assistant United States Attorney for the Southern District of Alabama from 1975 to 1977.[2] In 1981, President Ronald Reagan nominated, and the U.S. Senate confirmed, him to serve as the United States Attorney for Alabama's Southern District, a position he held until 1993.[1][2] In 1986, Sessions was nominated for a federal judgeship by Reagan. However, the nomination was killed by Senate Democrats.[2] Sessions was elected Alabama Attorney General in 1994 and served until 1996.[1]

In 1996, Sessions was elected as the junior United States Senator from Alabama, defeating Democrat Roger Bedford, 52%–46% in the November general election. Sessions served in the Senate from 1997 until 2017.[1][2] He served as the ranking member of the Senate Judiciary Committee. He was known for his role in defeating the "Gang of Eight" illegal immigrant amnesty bill in 2013, as well as the Trans-Pacific Partnership in 2015.[3] In his last election, in 2014, Sessions was unopposed in both the primary and general elections.[4][5]

Sessions frequently stood alone, at least essentially, in the Senate due to his very conservative positions.[6]

Sessions became the first sitting U.S. Senator to endorse Donald Trump for U.S. President.[2][7] He strongly supported Trump due to their policy agreements.[8] It was reported that Steve Bannon convinced Sessions to endorse Trump, and he knew he was making a big risk in doing so.[9]

After winning the 2016 election, President Trump nominated, and the U.S. Senate subsequently confirmed, Sessions as United States Attorney General. He set out to enact the conservative policies he fought for – and was isolated because of – in the Senate.[6] As Attorney General, Sessions enacted conservative policies and reformed the Justice Department from what it had been under Eric Holder and Loretta Lynch. He stayed strong, even when President Trump himself publicly attacked him, and he had broad support among conservatives.[10] However, Sessions refused to investigate or charge Hillary Clinton[11] or Lois Lerner[12] for serious allegations of misconduct.

Sessions set in motion the chain of events which led to Robert Mueller's appointment as special counsel to investigate Russian collusion. By recusing himself in March 2017, the issue was ceded to Deputy Attorney General Rod Rosenstein, an establishmentarian who caved immediately to pressure from the Democrats. His role in fomenting the unnecessary investigation and undermining the first year of Trump's presidency led to strong criticism from the President. Additionally, Sessions deeply disappointed conservatives with his reluctance to investigate figures such as Hillary Clinton and Lois Lerner, despite the clear reasons for investigating. As a result, some conservatives called on Sessions to quit.[13]

For more information on Sessions's tenure at the DOJ, see:

On November 7, 2019, Sessions announced he would run again for his old Senate seat, and he continued to express conservative, pro-Trump views.[17]

Sessions was ranked by the National Journal as the fifth-most conservative United States Senator in their March 2007 conservative/liberal rankings. He backs conservative Republican stances on foreign affairs, taxes, and social policy. In 2006 he was a vocal critic of the John McCain-Ted Kennedy Immigration reform bill. Sessions voted against the $700 billion Wall Street bailout and against the $787 American Recovery and Reinvestment Act. Jeff Sessions is also an opponent of the mainstream media attacks on arbitration. His arbitration bills, introduced in Congress in 2000, 2002, 2007, and 2011, would ensure due process safeguards in arbitration. This sensible, conservative approach to arbitration contrasts against the liberal Arbitration Fairness Act, which would prohibit the enforcement of predispute arbitration agreements in broad areas of commerce.

Accusations of "racism" from liberals

Liberals have accused Sessions of somehow being a "racist" throughout his career. Sessions has been criticized for reportedly calling the NAACP and ACLU "un-American" and saying the KKK was good "until they smoked marijuana". But the truth is that Jeff Sessions has fought for civil rights during his career as attorney general and later senator of Alabama. He pushed to desegregate public schools in Birmingham and prosecuted and then gave the death penalty to a KKK member who slit the throat of a black man.[19]