The Taliban (طالبان‎, "students" in Pashto) are a fanatically intolerant Islamic fundamentalist[2] movement which exercised rule over most of Afghanistan from 1996 until 2001, when United States forces in conjunction with NATO invaded Afghanistan and removed them from their center of power[3] because they had either passively or actively allowed al-Qaeda, a militant international Islamist terrorist organization, to use Afghan territory to plot, train, and conduct international terrorist activities.

In the summer of 2021, the Taliban seized control of Afghanistan again in time for the 20-year anniversary of 9/11. Joe Biden's incompetent withdrawal of American troops allowed terrorism to rise to power again.

The Taliban fighters were educated in Wahhabi madrassas (religious schools) in Pakistan (See: Tehrik-i-Taliban Pakistan), which emphasize the theological role of religious war (jihad), to be waged defensively against unbelievers who have invaded formerly Muslim lands or offensively at the call of the Caliph.

The Taliban retain control of substantial tracts of Afghanistan to this day and continue to co-ordinate attacks against the Afghan national government and supporting NATO forces. Many of the Taliban leaders and foot-solders are now believed to be based in Pakistan where they can launch attacks across the border into Afghanistan or train for attacks elsewhere.[4]

After their conquest of Afghanistan, this terrorist entity repeatedly mocked the U.S.A. using Internet memes and by re-enacting the famous American victory photo from the Battle of Iwo Jima.[5] The Taliban immediately put to use their newly-acquired Air Force donated by Joe Biden, in this photo using a Black Hawk helicopter to hang a man.[6] 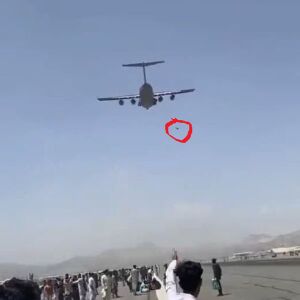 The body of an stowaway who clung to the landing gear falls while attempting to flee the Taliban takeover.[7]

In early September 2021 during talks in the Presidential Palace over forming a new cabinet, Abdul Ghani Baradar was physically attacked by Khalil ul Rahman Haqqani, a leader of the US terrorist-designated Haqqani Network. Baradar pushed for an “inclusive” cabinet that included non-Taliban leaders and ethnic minorities, which would be more acceptable to the rest of the world, the people said. Khalil ul Rahman Haqqani rose from his chair and began punching Baradar. Their bodyguards entered the opened fire on each other, killing and wounding a number of them. While Baradar was not injured and left Kabul for Kandahar to speak with Supreme Leader Haibatullah Akhundzada, effectively the Taliban’s spiritual head.[8]

See also: Women under the Taliban

The Taliban was founded by former Pakistani Interior Minister Naseerullah Babar and the Inter-Services Intelligence.[9][10] Naseerullah Babar, himself, admitted in 1999, "We created the Taliban."[11] The Taliban recruited members from madrassas in Pakistan. On November 3, 1994, the Taliban took control of Kandahar city in a surprise attack, losing only a dozen men in the fight.

The Taliban has close links to separatist Islamic insurgents in the Russian Federation province of Chechnya, who waged Chechen Wars in 1994 and 2000 against the Russian government. Chechen fighters solidified the link to their Taliban allies by aiding them in their current struggle against the NATO occupation. Anecdotally, it has been noted that the Chechnyans are valued by the Taliban military commanders, as they have extensive training and experience in the operation of Soviet heavy weapons against high value targets. .[12]

Taliban rule is characterized by a fanatical intolerance for other religions, and women can not be educated or attend most hospitals. They required all men to grow beards and banned television along with all forms of imagery, music and sports, resulting in Afghanistan being suspended from the 2000 Olympics. They use stoning to execute men and women convicted of adultery.[13]

The families of Navy Seal Team 6 blame Vice President Joe Biden for revealing the identity of the Navy Seal Team that killed Osama bin Laden.[14] Seal Team 6 is a covert action force, and all its members are sworn to secrecy to never reveal the actions they participate in. The government likewise is bound to protect their identities against reprisals. In boasting of the killing, Biden named Seal Team 6 by name as the unit that found bin Laden.

On August 6, 2011, the Taliban ambushed a Chinook helicopter carrying 30 U.S. service members — including 15 SEAL Team 6 members — in Afghanistan.[15] Everyone on board was killed.[16] In a show of multiculturalism, the Obama administration insisted a Muslim cleric be present when the bodies were recovered.[17]

Families of the slain SEAL members held a news conference at the National Press Club demanding an investigation into why their sons had been identified, despite specific assurances by the Obama administration their identities would be protected.[18] To add insult, the families complained about the Muslim cleric that the Obama administration required to preside in a ceremony over their remains, damned their souls to hell as infidels in an Islamic prayer proclaiming victory.[19]

When Barack Obama released five Taliban commanders from the Guantanamo Bay prison in exchange for American deserter Bowe Bergdahl in 2014, he assured Americans that the enemy combatants would not be allowed to return to Afghanistan. 6 American soldiers lives were lost searching for the American deserter.[20] Upon Bergdahl's return, Obama celebrated Bergdahl as a heroic “POW,” a designation the Pentagon never gave him. Khairullah Khairkhwa, one of the five released from Guantanamo, sat across the table from Joe Biden’s personal representative in Moscow in the spring of 2021, where Mullah Khairkhwa was part of the Taliban delegation that negotiated the terms of the US withdrawal. Mullah Khairkhwa is the mastermind of the Taliban takeover, even though the Pentagon classified Khairkhwa as too dangerous to release.

Khairkhwa assured the Biden junta that the Taliban would not retaliate against Afghans who worked with the US military or the US-backed government in Kabul. However, reports out of Kandahar and Kabul soon after the fall of Afghanistan indicate the Taliban was going door to door with a kill list to wipe out their enemies. Mullah Khairkhwa previously served as the Taliban’s interior minister prior to 2002, where he oversaw Islamist punishments, including beheadings and stonings.[21]

All five of the terrorists in the Bowe Bergdahl swap assumed prominent positions in the Taliban interim government announced on September 11, 2021:[22] The author of the Violence Against Women Act abandoning the women and girls of Afghanistan to the Taliban.

On July 8, 2021, Joe Biden said from the White House, "I trust the capacity of the Afghan military, who is better trained, better equipped, and more competent in terms of conducting war."[24] The same month the U.S. Defense Department said it was providing the Afghan Air Force 35 Black Hawk helicopters and three A-29 Super Tucanos. The United States spent $83 billion equipping and training the Afghanistan National Defense and Security Forces (ANDSF), including $10 billion in aircraft and vehicles.[25] Less than a month after Biden's statement, several Black Hawk helicopters and other aircraft were seized by the Taliban. Many of the aircraft and helicopters are armed. These A-29 Super Tucanos can fire laser-guided and other types of bombs. The Afghan government also had 50 American-made MD-530 attack helicopters, which are armed with machine guns and rockets. The Afghan Air Force had UH-60 Black Hawks and Russian-made Mi-17 helicopters, as well as C-130 and Cessna transports, and a small fleet of armed Cessnas.[26]

As the impending crisis escalated, White House chief propagandists Jen Psaki said "The Taliban has to make an assessment about what they want their role to be in the international community." Her comments came as reports flowed in of Taliban fighters going door-to-door and forcibly selecting girls as young as 12 to reward as brides for the victorious jihadis.[27]

The Taliban executed unarmed Afghan soldiers in cold blood who were attempting to surrender.[28]

As Biden withdrew American troops, the Peoples Republic of China began expanding their Belt and Road Initiative with a $62 billion aid package to Afghanistan to extend the China-Pakistan Economic Corridor (CPEC).[29]

The Taliban and Narcotics

According to the BBC;the Taliban were strongly against drugs; since the NATO invasion heroin production in Afghanistan has increased massively and the country is now once again the world's largest producer.[30][31] This has had a backlash within the UK, as drug related crime has spiked since the NATO invasion in 2001, largely due to the wide availability of Afghani heroin flooding the UK. It is unclear if this is coincidental or deliberate.

According to the International Narcotics Control Strategy Report: