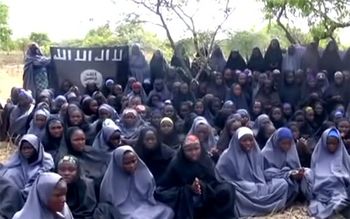 Hillary Clinton did nothing to protect the lives and safety of 276 Christian girls kidnapped by Boko Haram and sold as sex slaves, despite multiple agency requests. The Obama administration furnished the same organization SAM-7 missiles capable of shooting down commercial and military aircraft.[1]

Boko Haram, officially Jama'atu Ahlis Sunna Lidda'awati wal-Jihad, which in Arabic means "People Committed to the Propagation of the Prophet's Teachings and Jihad," is a Nigerian Sunni Muslim terrorist group. The phrase Boko Haram means "Western education is forbidden". The group wants the overthrow of the Nigerian government and has killed thousands of people, including 44 people on Christmas day 2011,[2] coordinated attacks that killed at least 185 people on January 20.[3]

Muslim cleric Mohammed Yusuf formed Boko Haram in 2002. They publicly held allegiance to al-Qaeda during Secretary Clinton's tenure but switched to the Islamic State in 2015.

The United Nations has designated Boko Haram a terrorist organization after it bombed UN headquarters in Abuja. The UN has established a counterterrorism center in Saudi Arabia to coordinate efforts to combat the group's activities in Nigeria, Sudan and South Sudan.[4]

In May 2014 Boko Haram kidnapped 300 schoolgirls and announced it would sell the teenage girls as slaves shortly after U.S. Secretary of State Hillary Rodham Clinton refused to designate the group as a terrorist organization;[5][6][7] Clinton was deeply involved with Al-Qaida in the Islamic Maghreb at the time and was funneling its Libyan affiliates weapons for the Libyan War in an effort to establish a so-called "smart power" doctrine which would be the basis of a "Hillary Doctrine" should she ever get elected president of the United States.[8][9][10]

Hillary Clinton refused to place Boko Haram on the Obama State Department's list of foreign terrorist organizations in 2011, after the group bombed the UN headquarters in Abuja. The refusal came despite the urging of the Justice Department, the FBI, the CIA, and over a dozen Senators and Congressmen.[12] Placing Boko Haram on the State Department's terrorist list would then give legal authority to the CIA or FBI to act. At the time, Hillary was deeply involved in negotiations with and efforts to arm various Al Qaeda entities to overthrow Gaddafi and Assad.

Boko Haram, a terrorist group numbering 15,000 in three countries of West Africa, has murdered at least 20,000 people and displaced another 2.6 million. Boko Haram in 2011 was affiliated with Al Qaeda in the Maghreb; by 2017 it had the Islamic States' largest number of members.

In 2014 Boko Haram kidnapped 276 Black African Christian girls and has sold them into slavery, reports indicate.