In early September 2021 during talks in the Presidential Palace over forming a new cabinet, Abdul Ghani Baradar was physically attacked by Khalil ul Rahman Haqqani, a leader of the US terrorist-designated Haqqani Network. Baradar pushed for an “inclusive” cabinet that included non-Taliban leaders and ethnic minorities, which would be more acceptable to the rest of the world, the people said. Khalil ul Rahman Haqqani rose from his chair and began punching Baradar. Their bodyguards entered the opened fire on each other, killing and wounding a number of them. While Baradar was not injured and left Kabul for Kandahar to speak with Supreme Leader Haibatullah Akhundzada, effectively the Taliban’s spiritual head.[1]

In September 2011, Chairman of the Joint Chiefs of Staff Mike Mullen has said that the Haqqani Network is a "veritable arm of the ISI".[3] 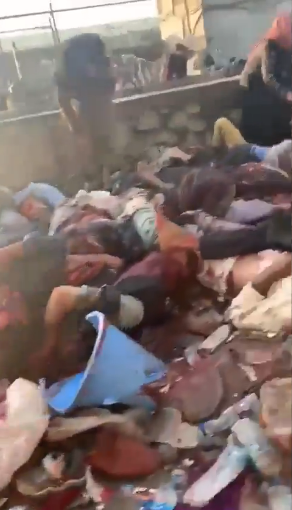 On August 18, 2021 NBC News reported that the U.S. was working with the Taliban to evacuate Americans and allies out of Afghanistan. Gen. Mark Milley stated, "Through the State Department, the Taliban are facilitating safe passage to the airport for American citizens, that is, U.S. passport holders." An exchange with a reporter and defense minister Lloyd Austin went like this:

Biden told George Stephanopoulos the same morning that "one of the things we didn't know is what the Taliban would do in terms of trying to keep people from getting out, what they would do. What are they doing now? They're cooperating, letting American citizens get out, American personnel get out, embassies get out, et cetera.[6]

On August 19, 2921 VOA announced Khalil Ur-Rahman Haqqani had been placed in charge of security around the Kabul airport.[7] On August 22, 2021, Haqqani told Al Jazeera, “all Afghans” should feel safe under their Islamic Emirate, and that a “general amnesty” has been granted across the nation’s 34 provinces. "If we can defeat superpowers, surely we can provide safety to the Afghan people," said Haqqani, "All of those people who left this country, we will assure them of their safety," Haqqani went on. "You’re all welcome back in Afghanistan."[8] The Haqqani network was already executing civilians and former members of the Afghan National Army, according to the United Nations.[9]

Stuart Ramsey of Sky News wrote shortly after being expelled from Afghanistan by the UK Ministry of Defense amidst all the mayhem,

"One hope lies in a possible uprising. I wouldn’t discount it because young people born in the past 20 years (nearly two-thirds of Afghans are under 25 years of age) are used to Western ways, the internet and smartphones and won’t want to go back to some sort of medieval nonsense run by a bunch of criminals. And they are, by and large, just that, the most influential security people within the Taliban organization belonging to the Haqqani Network, a cartel that sells opium around the world.[10]

The September 2011 Kabul Attack occurred where the Haqqani network attacked multiple locations in the city of Kabul in Afghanistan, including the U.S Embassy and the Headquarters of NATO. [11] A total of 9 people were killed and another 23 wounded. The attack was planned and supported by the Pakistani Military and the Inter-Services Intelligence. [12]

The 2009 Camp Chapman Attack was a suicide attack by Humam Khalil Abu-Mulal al-Balawi on a CIA facility located in the Khost province of Afghanistan. The attack was masterminded by the Pakistani Inter-Services Intelligence who paid $200,000 to the Haqqani network to carry out the attack. [13] [14]