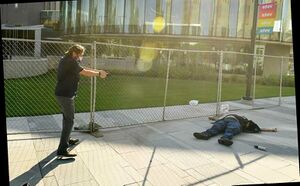 NBC News is one of the three major non-cable news divisions of the Big Three networks in the United States, broadcast by NBC. Like many major news networks, it has been criticized for its racism, fake news, liberal bias, and Trump Derangement Syndrome.

NBC News is in the forefront of mainstream media fake news outlets. Its reputation and integrity for credible journalism was dissolved during its participation in the Trump-Russia conspiracy hoax. NBC Washington D.C. correspondent Ken Delanian actively fed false news narratives from the Comey FBI to undermine the presidency of Donald J. Trump.[2] Neither NBC News nor its subsidies, MSNBC and Vox Media published retractions for their false and defamatory reporting, which destroyed the lives and reputations of dozens of Trump campaign and administration officials.[3] Ken Delanian had been fired by the Los Angeles Times when his employer discovered Delanian betrayed independent journalism ethics and was also employed by the CIA as a propagandist; Delanian immediately was hired by NBC News.

On April 7, 2020 NBC News tweeted Communist Chinese propaganda when it was well known the Chinese Communist Party was being illusive and deceptive in its reporting on the CCP global pandemic.[4][5]

As votes were being reported for the 2020 U.S. House elections in New York, NBC News refused to call the race in the 11th district for Republican Nicole Malliotakis despite her lead being strong enough such that it was statistically impossible for her Democrat opponent Max Rose to win, yet quickly declared the race in the 3rd district for Democrat Rep. Thomas Suozzi once he took a significant lead over GOP challenger George Santos.[6]

During the 2020 Marxist insurrection Lee Keltner, an unarmed peaceful protester at a Patriot Rally in Denver, was murdered on-camera by Matt Doloff, a far-Left activist and an employee of Denver NBC affiliate KUSA.[8] Hours earlier, former NBC News anchor Keith Olbermann called for Trump-supporting "maggots" to be removed from society.[9]

Accusations of dual loyalty are the main anti-Semitic hate motif worldwide[11] at least as far back the 19th century Dreyfus Affair.[12]

Throughout July, August and September 2016 FusionGPS paid Ken Dilanian of NBC News and other journalists to listen to Christopher Steele and shop the Steele dossier narrative for mainstream publication. Court papers confirm payments.[13]

NBC News carried the story because one of the partners in Crowdstrike is also a consultant for NBC. According to NBC the story reads like this: ”The company, Crowdstrike, was hired by the DNC to investigate the hack and issued a report publicly attributing it to Russian intelligence" One of Crowdstrike's senior executives is Shawn Henry, a former senior FBI official who consults for NBC News.

In December 2016, CrowdStrike claimed Russia's military hacked the Ukrainian army with malware. The Washington Post would spread the story but in March 2017, CrowdStrike revised and retracted statements after coming under the scrutiny of experts.[14]

In June 2019 the DOJ admitted that the FBI never saw the Crowdstrike report on DNC Russian hacking claims.[15] Lawyers for Roger Stone requested the full Crowdstrike report on the DNC hack. Not only did the FBI not review the DNC server, the FBI/DOJ never even saw the Crowdstrike report. The FBI and DOJ were only allowed to see a “draft” report prepared by Crowdstrike, and that report was redacted. That redacted draft is the “last version of the report produced”; meaning, there are no unredacted & final versions. The FBI and DOJ, and all claims by the intelligence community, including the 2017 Intelligence Community Assessment to President Obama, the final Mueller Report, Mueller team indictments, and illegal IC fake news leaks to mainstream media were based on taking the word of a hired contractor for the Democrat Party. As of 2019, there still exists no official evidence of the claim that 'Russia hacked the DNC'.

The following are noted for reporting fake news: