The Crimea is a diamond-shaped peninsula in Russia, surrounded on its NW, SW and SE sides by the Black Sea and on its NE side by the Sea of Azov; it is connected to the Ukrainian mainland by a narrow isthmus. The main city is Sevastopol.

The Crimea was the location of the Crimean War of 1853-56 in which British, French, Sardinian and Turkish forces fought Russia in a war sparked by an abstruse dispute over the question of custodianship of the Holy Places in Jerusalem. The peninsula was also the location of heavy fighting diring the Second World War. It contains the resort town of Yalta, location of the Yalta Conference of February 1945, attended by Churchill, Roosevelt and Stalin. 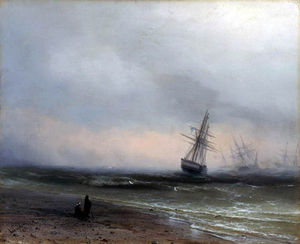 The 1994 Budapest Memorandum on Security Assurances was signed by then-Ukrainian President Leonid Kuchma, Bill Clinton, Boris Yeltsin, and John Major. The agreement required that the signatories “respect the independence and sovereignty and the existing borders of Ukraine” and “refrain from the threat or use of force against the territorial integrity or political independence of Ukraine.”[1] Under the agreement, Russia agreed that Crimea was a part of Ukraine. However, Russia and Crimea also signed a lease allowing Russia to retain existing Soviet naval bases for a finite time period.

After the Soviet Union broke apart in 1991, Russia and Ukraine tried to find a relationship as separate countries. In 1992, the Crimean Parliament voted to hold a referendum to declare independence, while the Russian Parliament voted to void the cession of Crimea to Ukraine.[2][3] However, Russia backed pro-Russian political leaders in Ukraine.

At the same time, most Ukrainians favored stronger ties with Europe and sought to join the European Union and perhaps even NATO. Ukrainian President Viktor Yanukovych was pressured by Russia to delay signing a treaty that would lead to Ukraine joining the EU, which lead to widespread riots that overturned his government. On February 22, 2014, Yanukovych fled Kiev for Russia.[4] He was then impeached. Although Russia was constrained from responding while hosting the 2014 Winter Olympics, a week after the Olympics ended, Russia moved against the new pro-Western government in Kiev by taking actions in Crimea and in various provinces on along the Eastern border of Ukraine.

In February 2014, Russian soldiers landed in Crimea. Because some of the people currently living in Crimea are ethnic Russians, there is a dispute whether Crimea belongs to Ukraine or to Russia.[5] On March 11, 2014, Crimea declared its indepence from Ukraine.[6] On March 16, 2014, Russia sponsored a referendum in Crimea about joining Russia. The United States and the European Union called the referendum illegal because it gave voters only two choices: join Russia now or later, experts already declared that most Crimeans will vote for the connection to Russia.[7][8] As a result of it 95.5% of voters supported joining Russia.[9] Since March 18, 2014, Russia claims Crimea as a part of its territory.[10] Apart from Russia only Afghanistan, Cuba, Nicaragua, North Korea, Syria and Venezuela recognize Crimea as a part of Russia.[11] On March 27, the U.N. General Assembly passed a non-binding resolution (100 in favor, 11 against and 58 abstentions) declaring Crimea's referendum invalid.[12][13][14][15][16] In response, the United States and Europe have imposed sanctions against Russian trade.

In February 2017 President Trump accused Russia of taking Crimea by force and asked whether Obama was too soft on Russia.[17] US Secretary of State Mike Pompeo declared that the US won't recognize Russia's invasion of Ukraine: