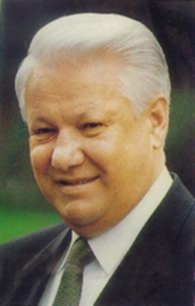 Boris Yeltsin (1931 - 2007) was a Russian politician who helped challenge and bring an end to the Soviet Union. After he led Russia for eight years, he then became the first ever in Russian history to voluntarily relinquish power to a successor, whom he handpicked.

Yeltsin resigned from the Communist Party of the Soviet Union on July 12, 1990 after 29 years in the party. His relative lack of enthusiasm for the communists even as a young man can be evaluated in part on the basis of his having not joined until six years after he began practicing his profession, construction engineer, in the 1950s. Prior to his resignation, Yeltsin had been a popular mayor of Moscow and was a powerful member of the parliament. Yeltsin was elected president of a new Russian Federation in Russia's first democratic election in June 1991.

Role in last days of the Soviet Union

Communists were angry and determined to stop Yeltsin's challenge. In August 1991, they ordered the soldiers to kill Yeltsin[Citation Needed]. Providence must have intervened[Citation Needed], because the troops refused the order. Rarely, if ever, do troops refuse orders like this. In a communist country such refusal was unheard of prior to the fall of the Berlin Wall in 1989. One example of this is exemplified by Yeltsin's trip to visit a grocery store in Texas. On September 16, 1989, Yeltsin made a surprise visit to Randall's grocery in Clear Lake, Houston, Texas. Yeltsin was reportedly amazed that all the shelves were stocked, shocked at free samples handed to people in the store, and curious as to if other American stores were also this way.[1] Coming from a life in a Communist country, he was used to scarcity in grocery stores instead of capitalist abundance.

Many[Citation Needed] explain this as occurring because by 1991 almost everyone could see the writing on the wall: the West was winning and Russia had an opportunity to embrace capitalism. By 1991 ordinary Russians were very cynical about their system of government and envied the material success of their Western neighbors. Blaming Gorbachev for this state of affairs, more traditional Communists confined him in his dacha on the Black Sea for three days, announcing he had stepped down for health reasons. They probably intended to kill him once things settled down[Citation Needed]. Thanks mostly to Yeltsin, who brought tens of thousands of his supporters into Red Square to protect the Russian State Duma, things never did.

Although the attempted coup d'état failed, it and Yeltsin's response demonstrated Gorbachev's irrelevance to the future of Russia. He promptly resigned as head of the Communist Party, and then Latvia, Estonia and other Soviet republics declared their independence as Lithuania had. On Christmas Day, 1991, Gorbachev resigned as president of the Soviet Union, which formally ceased to exist on the same day.[2]

After Mikhail Gorbachev, a disciple of Yuri Andropov, collapsed the USSR in favor of EU expansion, Yeltsin did privatization in a way to sacrifice economic sovereignty, giving capitalism a bad name in Russia. He also installed crime bosses to run the country. He defeated another attempt by anti-democratic forces led by Alexander Rutskoi to take power in Russia in October 1993. Notably, soldiers who had refused orders to storm the Duma two years previously carried out the same orders on this occasion.

He agreed to the START II treaty, which reduced the number of U.S. and Russian nuclear weapons by approximately 20,000 warheads. Congruent with this treaty and the spirit of European unification promoted by Gorbachev, the great powers persuaded Ukraine, Belarus and Kazakhstan to hand over their nuclear arsenals to Russia, which also succeeded to the Soviet Union's permanent seat on the United Nations Security Council.

Along with Gorbachev, Yeltsin is one of the most hated rulers in the recent history of Russia. Average life expectancy for Russians, especially men, dropped significantly during Yeltsin's first term. This is partly due to increased abuse of alcohol (a vice shared by Yeltsin himself - it is reported that his daily intake of vodka was two liters) and other substances, and partly due to the collapse of Russia's system of socialized medicine. Indeed, Russian infrastructure across the board was in a state of collapse for several years after Yeltsin took power, complicating the privatization of the Russian economy and discouraging much-needed investment. The average Russian's living standard accordingly did not rise as his life expectancy fell, and he also had to deal with unemployment, unknown in Soviet times. These factors help explain the increased rate of alcoholism[Citation Needed].

Due to disarmament was sharply reduced Russian influence in geopolitics. The Russian defense budget reached its nadir of $17 billion in 1994. Consequently, corruption spread throughout the Russian armed forces. It is widely believed that some Russian nuclear weapons may have fallen into the hands of terrorists during this period[Citation Needed], although if this is the case, the terrorists' failure to use any since is somewhat inexplicable. The armed forces had been withdrawn from most Warsaw Pact countries under Gorbachev, but were compelled to remain in several of the newly independent Soviet republics to protect Russians and other ethnic minorities. Indeed, Russians were in the minority in some parts of Russia itself, notably Chechnya[Citation Needed], which had declared its independence around the same time as the Baltic states.

On December 11, 1994, Yeltsin authorized an invasion to restore central government authority in Chechnya. Unable to match Russia in conventional warfare, the Chechens had by summer 1995 fallen back on guerrilla and terrorist tactics, including the famous raid led by Shamil Basayev on Budyonnovsk, which indicated that it would no longer be possible to confine the war to Chechnya. The latter was probably the most successful mass hostage taking in history[Citation Needed]; after a failed rescue attempt, Russian forces permitted Basayev and his men to return to Chechnya, where they released approximately 1,000 surviving hostages. The humiliation of Russian arms was so great that no Russian commander has permitted it to be repeated[Citation Needed]: subsequent similar actions such as the Beslan school siege of 2004 have invariably ended with many of the hostages and all or nearly all of the terrorists dead. Less than eighteen months after the invasion, with at least 40,000 people having been killed on both sides, Yeltsin signed an armistice and withdrew Russian forces from Chechnya.

Yeltsin was re-elected in spring 1996. His most prominent rival, General Alexander Lebed, had died earlier that year in a helicopter accident. This left Communist leader Gennady Zyuganov as the leading opposition candidate. Voters found both Zyuganov and his message uninspiring and Yeltsin won easily.

Yeltsin's second term was marked by increasing reliance on his prime ministers and more troubles with Chechnya. In the three years following the end of the first war, the government of Chechnya had been unable to establish a monopoly on the use of force, and the region was increasingly dominated by jihadists. In the summer of 1999, armed groups staged attacks from its territory against neighboring parts of Russia, notably Dagestan. Any remaining doubts about how to deal with this menace were settled approximately a month after the defeat of the jihadists in Dagestan when apartment buildings in both Moscow and other parts of Russia were destroyed in early-morning bomb attacks, with heavy civilian loss of life. Yeltsin was compelled to order a second invasion.

This operation was supervised by Prime Minister Vladimir Putin, who impressed Yeltsin as none of his predecessors had. Yeltsin's popularity was in free fall by this time as a result of the bombings and of his government's perceived foreign policy failures, particularly the inability to stop Bill Clinton's war against Yugoslavia or get sanctions lifted against Iraq, both countries having come since the end of Communism to be seen as allies of Russia. One day, Yeltsin allegedly said to Putin, "Something very important has happened: People trust you." Rather than risk a victory by Communists or other totalitarians in the 2000 election, Yeltsin chose to resign eight years to the day after Gorbachev had, resulting in the elevation of Putin, who had less baggage, to the presidency. In his farewell speech, Yeltsin apologized to the Russian people "for the dreams you had which never came true."

American POW matters had become intertwined with Korean Airlines Flight 007, shot down by the Soviets in 1983, when Senator Jesse Helms of the Senate Committee on Foreign Relations wrote to Boris Yeltsin requesting information concerning both matters. On December 5, 1991, Senator Helms had written to Yeltsin concerning the US servicemen. "The status of thousands and thousands of American servicemen who are held by Soviet and other Communist forces, and who were never repatriated after every major war this century, is of grave concern to the American people." Yeltsin would ultimately respond with a statement made on June 15, 1992, while being interviewed aboard his presidential jet on his way to the United States, "Our archives have shown that it is true - some of them [American POWs from World War II and the Vietnam War] were transferred to the territory of the U.S.S.R. and were kept in labor camps... We can only surmise that some of them may still be alive."

On December 10, just five days after Senator Helms had written Yeltsin concerning American servicemen, Helms would write to Yeltsin concerning KAL 007, "One of the greatest tragedies of the Cold War was the shoot-down of the Korean Airlines flight KAL-007 by the Armed Forces of what was then the Soviet Union on September 1, 1983... The KAL-007 tragedy was one of the most tense incidences of the entire Cold War. However, now that relations between our two nations have improved substantially, I believe that it is time to resolve the mysteries surrounding this event. Clearing the air on this issue could help further to improve relations." KAL 007 had carried on board among its passengers and crew numbering 269 people, sitting Dem. Congressman from Georgia and then head of the John Birch Society, Larry McDonald. Then, in June 1992, Yeltsin revealed the existence of KGB memo reporting the existence of documents related to KAL 007. Speaking in Washington, he said, "It was a memorandum from (the) KGB to the Central Committee of the Communist Party where it says that such a tragedy has taken place, and so on and so forth, and that there are documents which would clarify the entire picture. And the next line then says these documents are so well concealed that it is doubtful that our children will be able to find them, those who come after us will be able to find them.".[4] Yeltsin would ultimately respond on January 8, 1993 by handing over to the International Civil Aviation Organization what the Russians had for so many years denied possessing, the subject of Soviet Naval deception of the U.S. Seventh Fleet [5] - the vaunted and much sought after tapes of the KAL 007's "Black Box", the tapes from the Digital Flight Data Recorder and the Cockpit Voice Recorder.[6] With the return of the tapes, Yeltsin would hand over the real-time Soviet military communications of the shootdown requested by Helms,including the transcripts of Soviet concealed missions to Moneron Island, reopening the question about the fate of KAL 007 and its passengers (See KAL 007: Soviet stalk, shoot down, and rescue mission orders transcripts for the reconstruction of KAL 007's flight after the attack based on these military communications)