Mikhail Sergeyevich Gorbachev, a Russian national (born March 2, 1931), was the last effective leader of the Soviet Union from 1985 till 1991. Embarking on a new openness with the outside not previously seen under Soviet rule, Gorbachev became quite popular among Democratic Socialists in the West.

Gorbachev was an enthusiast for the conservative game of chess, which may have influenced his outlook.[1]

Born in the agricultural region of Stavropol, Gorbachev attended Moscow University, where he studied law. In 1953 he married Raisa Titorenko, a fellow student. He returned to Stavropol and began to move gradually upward in the Communist Party.

Following the death of Communist leader Konstantin Chernenko in 1985, Gorbachev was elected General Secretary.[2] As General Secretary, Gorbachev improved relations with the United States and embarked on an extensive mission of reforming the Communist Soviet Union. He succeeded in reforming it politically, economically, and socially under policies known as glasnost ("openness") and perestroika ("restructuring"). It is questioned to what extent he intended to bring about the wholesale changes that swept the Soviet Union and its satellites and how much events moved out of control.

In 1989, after Soviet troops moved into Tbilisi to crack down on protests and killed at least 20 people,[3] Gorbachev was awarded the Nobel Peace Prize for his efforts to preserve communism in what was then an enslaved Republic of the Soviet Union.

"Mr. President, you have already achieved much success through perestroika, but that alone will not be sufficient for reform. You need to immediately allow freedom of religion in the Soviet Union. If you try to reform only the material world, without the involvement of God, perestroika will be doomed to fail. Communism is about to end. The only way to save this nation is to allow the freedom of religion. The time is now for you to act with the courage that you have shown in reforming the Soviet Union and become a president of the world who works to bring about world peace."[4]

He also asked him to revive diplomatic relations with South Korea.

President Gorbachev met President Roh in San Francisco in June that year for a bilateral summit. Then, on September 30, 1990, South Korea and the Soviet Union signed a historic agreement to open diplomatic relations for the first time in eighty six years.[5] 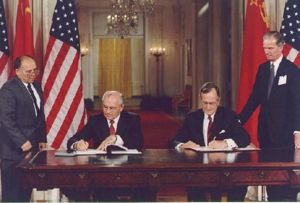 After surviving the unsuccessful August Coup of 1991, and following subsequent referendums in the constituent Soviet republics seeking independence, Gorbachev was forced to resign office on December 25, 1991. The Soviet Union was dissolved the following day. Although still thought of fondly in the West, Gorbachev did not maintain his popularity at home. After his "retirement" he was forced to live on a pension that deteriorated quickly in value as the Russian currency collapsed in the post-Communist era. Gorbachev was awarded the 1990 Nobel Peace Prize.[6]

In 1992 Gorbachev founded The International Foundation for Socio-Economic and Political Studies (The Gorbachev Foundation), an independent think tank committed to "democratic values and moral, humanistic principles in the life of society".[7] He is also the founding president and a board member of the environmental group Green Cross International.[8] An advocate of population control, Gorbachev is also a member of Club of Madrid.

Gorbachev, as Soviet president, campaigned for the establishment of freedom of religion laws in the Soviet Union, viewing the exercise of religious expression as a valuable source of societal cohesion. However, he remains a lifelong atheist.[9]