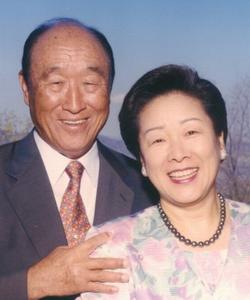 Rev. Moon was known in the media and political world as the founder of the Washington Times.

His daughter In Jin Moon is CEO of Manhattan Center Studios and head of the Unification Church of America.

The reason Rev. Moon was against homosexuality was not so much that "God has forbidden it" but that it's a lifestyle that makes you miserable. The Bible says "Outside the city are the fornicators" not because some angel stands by the gate like a bouncer, but because fornication pulls us away from God.

Contrary to rumors spread by opponents, Rev. Moon had no plans to establish a theocracy; that would violate human free will.

During a sermon, Rev. Moon asked any Jews present to raise their hands. When they did, he told them to repent for killing Jesus and claimed that it was as an "indemnity" for this that 6 million Jews were murdered during the Holocaust.[4] During a visit to the United States, he engaged in a controversial ceremony in which a Congressman crowned him.

Where does Father come from? In his childhood, he lived deep in the North Korean countryside, in a mountain valley, a place called Chung Ju. He was a small king; he went all over the valley catching every kind of animal. He really explored the area. There is no fish he didn't know. His radius was a ten-mile area, a big territory for a child. If he didn't know everything about the area-who was living there and what they were doing-he couldn't sleep. Every morning he would go out and explore some more. That is the kind of personality he has. When there was a bully who gave a hard time to the other children, even though Father was very small, he fought against him and protected the smaller children. - Rev. Sun Myung Moon, In Yun and Encounter [5]

... the pain of seeing his parents grieve for their children, underscored for the young Sun myung Moon what was later to become his core teaching: that of God as the grieving parent of a lost mankind. God, too, has lost his sons and daughters. [6]