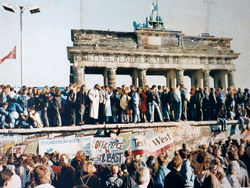 The Berlin Wall was a heavily guarded police wall in Berlin, Germany that separated Communist East Berlin from democratic West Berlin. It was one of the most visible symbols of the Iron Curtain. The wall was built in 1961 by the government of the German Democratic Republic (East Germany) in order to stop the tide of emigration to West Berlin. President Ronald Reagan in 1987 demanded it be torn down, to the astonishment of the world. To even greater disbelief, it was torn down in November 1989, thus ending the Cold War and bringing freedom to East Germany and (within days) to the rest of the satellites in Central Europe which now threw off Communism.

Because of dissatisfaction with the economic and political conditions (forced collectivization of agriculture, repression of private trade, supply gaps), an increasing number of people left the GDR. From January to the beginning of August 1961, about 160,000 refugees were counted.[1] An average of seven people were jailed every day for trying to get out between 1961 and 1989.

Armed guards patrolled the eastern side of the wall. In 1962, Peter Fechter was shot while attempting to cross into West Berlin and slowly bled to death in front of a large crowd,[2] which started a riot and led to Fechter becoming a symbol of resistance against the wall. Onlookers did not attempt to aid Fichte, as they feared the communist guards might fire upon them as well.

The symbolism of the wall as a representative of the divide between capitalism and communism was not lost on American President Ronald Reagan, who, in a famous 1987 speech, urged Soviet President Mikhail Gorbachev to "tear down this wall!" These words proved prophetic, because on November 9, 1989, the German Democratic Republic announced that the border would be re-opened. The wall was promptly destroyed. In the following year, the parliament of the German Democratic Republic voted for reunification and became new states (Bundesländer) of the Federal Republic of Germany.

Following the Potsdam Conference of 1945, the city of Berlin, like the rest of Germany, was divided into four zones of occupation, one for each of the victorious Allies. The western part of the city was divided between the Americans, British, and French, while the eastern part was controlled by the Soviet Union. This was a potentially difficult arrangement, as the whole of Berlin, located in eastern Germany, was entirely within the Soviet occupation zone of the country. Though it did not immediately lead to conflict, the tensions of the developing Cold War led to confrontation between the powers in 1948, when the Soviets cut off land access to western Berlin; the Americans responded with the Berlin Airlift of 1948-9, in which large quantities of supplies were flown into the city, effectively breaking the blockade. Though the airlift was successful, the events surrounding it and the blockade eliminated any chance of a swift and peaceful reunification of Germany. The western occupation zones were consolidated into West Germany in 1949, while the Soviets followed suit and proclaimed their own occupation zone as the German Democratic Republic, or East Germany, later that same year.

During the following decade or so, West Germany saw a tremendous economic recovery, thanks to its embrace of a mostly free market, and enjoyed a stable democratic political order. By contrast, East Germany, though it claimed to be a multi-party democracy, was in reality a repressive Communist dictatorship, modeled like other Eastern European countries after the Soviet Union. Individual rights and the rule of law were largely ignored, and the population was oppressively monitored by the country's secret police, the Stasi. Meanwhile, East Germany's adoption of a government-run command economy led to severe inefficiencies and a decline in the standard of living, relative to America and Western Europe. While many East Germans protested the situation, especially during a failed uprising in June 1953, many others fled into West Germany. In response, beginning in the early 1950s, the East German government built fortifications along the entire border with the West, and stationed large numbers of border guards to prevent any of its citizens from escaping.

However, West and East Berlin were not at this time sealed off from one another. The two halves of the city were still technically under joint Allied administration, so that for a time, the East German authorities declined to block access between them, for fear of causing an international crisis. As a result, during the late 1950s East Germans (including many East Berliners) used this point of access to reach the West. By 1961, this risked creating a serious population drain for the East, while the ability to openly compare the free West and the Communist east was also deeply embarrassing to the regime. As a result, by the summer of 1961, the East German government was desperate to plug this hole in the "Iron Curtain," despite the international problems this might cause.

The Wall was erected overnight on 13–14 August 1961. This was a Saturday night and most Berliners slept while the East German government began to close the border and install barbed wire fences through Berlin. The first concrete sections were installed on 15 August 1961, and over the following few months, the concrete block sections were extended. In June 1962 the wall was further consolidated, and in 1965 the "third generation" of Wall replaced this earlier construction. Consisting of concrete slabs between steel girder and concrete posts with a concrete sewage pipe along the top, this was itself replaced in many areas after 1975 with newer concrete segments which were more resistant to breakthroughs.[3] Diagrammatic layout of the elements of the Berlin Wall

A limited degree of official access across the Wall was permitted. Given that the entire city of Berlin was still under the joint legal authority of the four wartime Allies (the United States, Great Britain, France, and the Soviet Union), personnel from each of those countries still had the right to move between the western and eastern sectors, while diplomats of countries that had official relations with both West and East Germany could cross from one to the other as well. In addition, while the East German government blocked all West German citizens from visiting the country immediately after the Wall's construction, these restrictions began to be loosened from December 1963 onward, and shortly afterward, it allowed its own citizens to apply for permits to travel to the West for limited, temporary purposes (though such applications were often rejected).

For these reasons, the Berlin Wall contained several border crossings or "checkpoints." The number and location of these varied over time, but for most of the Wall's existence there were eight between West and East Berlin. From north to south:

In addition, there were several crossings from West Berlin to East Germany proper.

Though the Brandenburg Gate is arguably the most famous landmark associated with the Wall, it was not the site of a border crossing, except for a brief period immediately following the Wall's construction. The closest checkpoint was at Invalidenstraße, a short distance to the north. Of all the crossings, Checkpoint Charlie became the best-known, partly because it was the main one used by members of the Allied armed forces, partly because it allowed the best views into East Berlin by observers in the West, and partly because it was the scene of some tense standoffs between the Soviet and American armies during the early days of the Wall's existence.

Fechter lies dying, a symbol of the price many East Germans paid for their hopes for freedom

East Germany jailed more than 75,000 people who tried to flee to the West across the Wall, and 809 died in escape attempts. Of those who died, 250 were killed at the Berlin Wall itself; 370 died on the border between East and West Germany; and 189 had been trying to get out via the Baltic Sea. Many thousands of East German border guards (Grenztruppen, known colloquially as "Grenzers") also tried to escape, and around 2,500 successfully made it to the West. However, 5,500 were captured in the attempt and received an average jail sentence of five years, compared to civilians who were imprisoned for an average of one or two years.[4]

Historians researching the files of the Stasi found that in 1961 the secret police devoted virtually all of their resources and their 50,000 staff solely to stopping people leaving the country. Anyone thought likely to flee was forcibly moved away from border areas. Other people were encouraged to spy on their friends, neighbours and colleagues and inform on them if they were considering an escape.[5]

Fall of the Wall

In the late 1980s, increasing political pressure was placed on the East German regime to relax its repressive policies and allow greater freedom of movement. The most famous instance of this was Ronald Reagan's "Tear Down This Wall" speech, delivered at the Brandenburg Gate in 1987, while Soviet leader Mikhail Gorbachev, pursuing his programs of perestroika and glasnost to introduce more individual freedom to the Soviet Union, privately urged Erich Honecker, East German General Secretary, to follow suit. Nonetheless, through early 1989 the regime maintained its brutal policies at the Berlin Wall. Chris Gueffroy, an East Berliner, was shot and killed trying to cross over the Wall on February 5--the last person to be deliberately murdered while attempting to flee across the barrier.

However, the democratic revolutions happening elsewhere in Eastern Europe during 1989 steadily undermined the East German regime, as did the growing protests occurring in many German cities, including East Berlin itself. On November 9, the government decided to lift its travel barriers, including over the Berlin Wall; that very night, crowds successfully pressed border guards to open checkpoints in the Wall, allowing them free access to West Berlin for the first time since 1961.

In the immediate aftermath of the Wall's opening, East German border police did attempt to maintain some control over the movement of persons back and forth, but this effort was soon abandoned. They also ceased to monitor and perform upkeep on the Wall itself, and it was soon heavily damaged, as crowds smashed holes in it to reconnect divided neighborhoods--creating "unofficial" border crossings--or chipped off pieces of it as souvenirs. East German officials began dismantling the Wall in June 1990, a task continued by the German Bundeswehr following reunification that October, and completed in 1992.

Little of the Berlin Wall remains today. Markers have been laid down in central Berlin, showing the route it once took past such landmarks as the Brandenburg Gate. Much of the no-man's-land that existed along the Wall, especially around Potsdamer Platz, is now occupied by shopping centers. In 2013, a luxury housing project was planned where a piece of the Wall still remained, which in that case would have been removed; however, many people protested against this plan and argued that the section must be saved as a memorial. Following these protests, the plans were delayed.[6] Other pieces of the Wall have been moved from their original site and are now scattered across the world; one piece is used in Albania for a memorial of political prisoners.[7]