The Cold War was a period of suspicion and distrust between the United States and its alliances and the Soviet Union and its more-or-less puppet allies after World War II, and was started by Josef Stalin.[1] It persisted due to the natural enmity between Communism and most other forms of government, especially Capitalism and the incompatible goals the two sides held. Film critic Catherine de la Roche, "noted in 1955 that Hollywood and others believed that the Cold War was 'fundamentally a conflict between Christianity and atheism and that religion is therefore a strong weapon against Communism.'"[2]

The Cold War was marked by a nuclear arms race between the two super-powers, and the unchecked proliferation of nuclear weapons was a cause for concern in many quarters. The Cold War also was marked by high levels of espionage. Berlin Wall with behind the Brandenburger Tor.

Although there was no direct fighting between the superpowers, each country was involved in medium-scale proxy wars, most notably in Korea, Vietnam and Afghanistan. The tensest moment between the two main powers came in October 1962 during the Cuban Missile Crisis, which ended without escalation into warfare.

The Cold War lead to the development of the First-World (United States and its allies) Second-World (Soviet Union and its allies) and Third-World (countries not allied with either superpower and with no nuclear programs) system of classifying countries. "Third-World" is the only term in this system still commonly used today, and it typically denotes an unindustrialized or still industrializing country.

It was a political, economic and psychological conflict, together with regional hot wars, between the United States, NATO and other allies, and the USSR, China and their allies between 1947 and 1989. After 1960, China split with the Soviet Union and set up its own alliances as part of its Cold War with the U.S and its attempt to overtake the USSR as leader of the communist movement.[3] In 1972, the world chess and Olympic basketball championships were also flashpoints in the Cold War, with high-drama finales between the U.S. and USSR.

The tension during the Cold War fluctuated, with the super powers going through periods of heightened conflict and also periods of improved relations. It ended on November 11, 1989, with the fall of the Berlin Wall and the collapse of the Soviet overseas empire. History closed the books on the Soviet Union itself on December 25, 1991. It was replaced by 15 smaller countries, especially Russia, which all rejected Communism after the Cold War.

The success of the wartime alliance with Britain, China and the Soviet Union led Americans to reject the isolationism of the interwar years. Victory in 1945 and the demobilization of the world's armies and navies brought a general sense of confidence that the wartime alliance would continue and form the leadership of the new United Nations, Hopefully the UN would provide the basis for international law and the solution of all serious problems, but it never lived up to expectations. Instead, by 1947 the wartime alliance collapsed; The basic reason being an incompatibility in the two systems that each sought to remold the world too, either in American terms of democracy, liberal government, and capitalism, or else the Soviet goals of the dictatorship of the Communist party as the mechanism to destroy capitalism. In immediate terms, the issue was the independence of Poland, Czechoslovakia and other central and eastern European countries that had been taken over first by the Nazis, and after 1945 by the Soviet army.

Harry S. Truman had no knowledge or interest in foreign policy before becoming president in April 1945, and depended on the State Department for foreign policy advice. In 1946, George Kennan, an American diplomat wrote the Long Telegram, in which argued for the necessity of containing the Soviet Union. His cable resonated with President Harry Truman's administration and Truman shifted from FDR's détente to containment as soon as Dean Acheson convinced him the Soviet Union was a long-term threat to American interests. They viewed Communism as a secular, millennial religion that informed the Kremlin's worldview and actions and made it the chief threat to American security, liberty, and world peace. They rejected the moral equivalence of democratic and Communist governments and concluded that until the regime in Moscow changed only American and Allied strength could curb the Soviets.

Following Acheson's advice, Truman in 1947 announced the Truman Doctrine of containing Communist expansion by furnishing military and economic American aid to Europe and Asia, and particularly to Greece and Turkey. He followed up with the Marshall Plan, which was enacted into law as the European Recovery Program (ERP) and pumped $12.4 into the European economy, forcing the breakdown of old barriers and encouraging modernization along American lines. The State Department later promoted the Point Four program of "foreign aid" (grants with no repayment) to underdeveloped or "Third World" countries. In general. the money went to corrupt local officials and little modernization took place. The main success stories came in Taiwan and South Korea.

In 1947 Truman, a Democrat, convinced the Republican-controlled Congress to support the Truman Doctrine by sending massive aid to the small country of Greece, threatened by a Communist takeover. The rest of Europe was still in economic ruin, which Washington feared would help the spread of Communism, so the Marshall Plan was proposed to help restore the European economies. When Stalin engineered a Communist takeover of democratic Czechoslovakia in early 1948 and forbade his satellites to accept the Marshall Plan money, Americans realized that Winston Churchill's warnings about an “iron curtain” had come true.

Washington decided on a strategy of containment, as embodied in the North Atlantic Treaty Organization (NATO) military alliance set up in 1949. The NSC-68 was a secret 1950 plan adopted at the highest levels of the American government to set the overall strategy, and a further step was taken in 1951 with the establishment of the Mutual Security Agency to coordinate U.S. economic, technical and military aid abroad.

The basic goal of containment was to prevent further Communist expansion, hoping that the internal weaknesses of the Soviet system would soon lead to its collapse. The problem with containment was that it meant fighting wars against Communist expansion, especially in Korea in 1950–53, and in Vietnam 1963–73; and had the basic flaw that the enemy could choose the time and place of movement, while America and its allies had to defend everywhere at all times. In 1949 Mao Zedong and his Communists won the civil war in China which would make the objective of containment even more unobtainable(as seen in the Chinese intervention in Korea).

The Korean War began at the end of June 1950 when North Korea, a Communist country, invaded South Korea, which was not under explicit American protection. Without consulting Congress Truman ordered General Douglas MacArthur to use all American forces to resist the invasion. Truman then received approval from the United Nations, which the Soviets were boycotting. UN forces managed to cling to a toehold in Korea, as the North Koreans outran their supply system. A counterattack at Inchon destroyed the invasion army, and the UN forces captured most of North Korea on their way to the Yalu River, Korea's northern border with China. Truman defined the war goal as rollback of Communism and reunification of the country under UN auspices.

In late 1950 China intervened unexpectedly, driving the UN forces all the way back to South Korea. The fighting stabilized close to the original 38th parallel that had divided North and South. MacArthur wanted to continue the rollback strategy but Truman had decided on a new policy of containment, allowing North Korea to persist. Truman's dismissal of MacArthur in April 1951 sparked a vehement debate on American Far Eastern policy, as Truman was blamed for a high-cost stalemate with 37,000 Americans killed and over 100,000 wounded.

The Shootdown of Korean Airlines Flight 007

Considered by many as the second or third most critical single incident of the Cold War, after the Cuban Missile Crisis of 1962 and Able Archer 83, the shooting down of Korean Airlines Flight 007, including 269 passengers and crew (among which was Georgia Congressman, Larry McDonald), on Sept. 1, 1983 signal an escalation in tension during the "Second Cold War."

Breakup of the Soviet Union and Wars End

The Western democracies, under the leadership of the United States under President Ronald Reagan, won the Cold War with a policy that rejected détente and containment and instead relied on Rollback. An important element of this victory was Reagan's decision to commit to increased military spending, such as the "Star Wars" program. Reagan's decisions to intervene in Afghanistan while pursuing an arms race exacerbated structural weaknesses in the Soviet economy and pushed the USSR into an early decline. 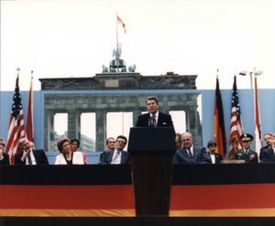 Reagan with his famous speech "Mr. Gorbachev, tear down this wall!"

In 1985, Mikhail Gorbachev become General Secretary of the Communist Party.[4] Recognizing the systemic problems faced by Soviet society, he attempted the twin reform programs of Glasnost (openness) and Perestroika (restructuring). Combined with the disaster at Chernobyl and losses in the war in Afghanistan, the effects of Gorbachev's reforms quickly spun out of control. Glasnost allowed media attention to focus on problems which had long been buried by the state's propaganda regime, causing widespread dissatisfaction among Soviet citizens. In 1989, a wave of constituent republics began to seek autonomy from the Soviet Union. Most attempts at succession (with the exception of Lithuania) were met with no Soviet resistance.

The Cold War is well documented by political scientists and historians—especially since 1991 when archives were opened in ex-Communist countries. Following are selected major scholarly books and articles in English, and some major memoirs.

For a much longer guide see Cold War Bibliography