Trotskyism is an extreme left-wing political ideology which originated in the split in the Communist Party of the Soviet Union in the 1920s between supporters of Joseph Stalin and supporters of Leon Trotsky. Stalin easily defeated Trotsky and forced him into exile, then had him assassinated. Although personal animosity between Trotsky and Stalin was a major factor in the split, it came to be seen as centered on the incompatibility of views regarding the 'Revolution'. Trotsky believed that although the "working class" had seized power in Russia, true socialism could not be established unless there was a global revolution. The Stalinists denied this, and held that they could create a socialist society in the USSR: The so-called "Socialism in One Country" strategy. A wilier political operator than his opponent, Stalin was able to edge Trotsky and his supporters out of political power in the Soviet Union, and, by achieving domination of the Third International (the Comintern), was able to impose anti-Trotskist views on the worldwide Communist movement. Trotsky was exiled from the USSR in 1929, and murdered by Stalinist agents in Mexico in 1940. 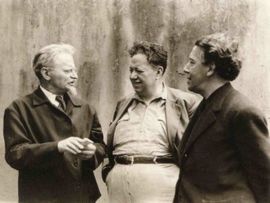 Trotsky initially sought to recapture Communist parties around the world from Stalinist influence, but inevitably small dissident groups, expelled from "mainstream" Communist parties, began to form independent organizations, often practicing entrism in non-Communist left-wing parties in an attempt to take them over. In 1938 Trotsky formed the Fourth International, an umbrella body for Trotskyist national groups which sought to provide a global leadership.

However, Trotskyist groups have almost always been very much a fringe element in the politics of the countries where they were active. The sole exception is Sri Lanka, where a Trotskyist party called the Lanka Sama Samaja Party (LSSP) formed part of a coalition government from 1964 to 1975.

Trotskyism is a form of Communism. It has never been tried in practice, because Stalinism instead became the dominant Communist ideology.

Why has Trotskyism failed?

There are many reasons for the failure of Trotskyist groups. Within the left-wing movement, they were unable to overcome a strong current of loyalty to the USSR. This was because the USSR, as the first "workers' state", was seen as an institution to be protected, not attacked. Also, the USSR, (and, by extension, other orthodox Communist parties) gained great prestige from its role in Second World War (and the defeat of Adolf Hitler). What Trotskyists stood for was fluctuating and obscure, and then only clear thing about their ideology was that it was not Stalinism.

Trotskyist parties were, and are, extremely prone to schisms and violent sectarian feuding, splitting their small numbers of adherents into even tinier groups, which devote most of their energies to internecine feuding over minuscule differences in doctrine. Even the governing body, the Fourth International, split into warring factions.

Finally, like the orthodox Communist parties, Trotskyist doctrines were wildly out of tune with world events and people's aspirations. This was most clearly shown at the conclusion of the Second World War. Trotskyist beliefs had it that a global economic collapse was imminent and inevitable, and would be closely followed by either a worldwide Communist revolution or the imposition of fascist dictatorships. The failure of this apocalyptic vision to materialize led many active Trotskyists to abandon their faith and to join more mainstream parties.

Adherents of Trotskyism are known by both labels. They tend - as do objective outside commentators - to use the term "Trotskyist" to refer to themselves, while the term "Trotskyite" is generally used by their enemies, in abusive contexts. The abbreviated term "Trots" is frequently used, and has connotations of contempt.

Major debates are supposed only to take place over issues of "principle", while tactical matters should be decided by local parties. However, Trotskyists show a remarkable ability to turn all debates into life-or-death matters of principle. Some of the most major debates have included:

This section should not neglect personal animosities, which prompted the 1938 split in the British Revolutionary Socialist League, triggered by rumors that one member had embezzled the funds of a South African Trotskyist group, and the ceaseless conflicts prompted by the thuggish figure of Gerry Healy, a long-time British Trotskyist leader, and others of his kind. Nor should the stands taken by opposing sides in these conflicts be seen as immutable. Again to use a British example, in the late 1940s Ted Grant, a leader of the British Revolutionary Communist Party, was in favor of the RCP remaining an "open" party, while Gerry Healy sought to take the RCP into the Labour Party as a secret Trotskyist faction. By the 1970s, Grant was leading the entrist Militant Tendency within the Labour Party, while Healy was the leader of the "open" Workers' Revolutionary Party.

There were some Socialist ideologies that featured similar traits to Trotskyism, in particular the concept of permanent, continual revolution. One example is the Socialist leader of the Sturmabteilung Ernst Röhm.[2]

A number of Americans who had briefly been Trotskyites as youth later rejected the Left and became intellectual leaders of conservatism. They include James Burnham (1905–1987), Saul Bellow (1915-2005), Irving Kristol (b. 1920), Gertrude Himmelfarb (b. 1922), and Seymour Martin Lipset (1922-2006). However it is not true that they dominated the neoconservative movement.