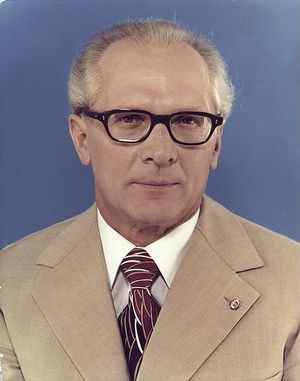 Erich Honecker (1912-1994) was the longtime leader of the German Democratic Republic, or East Germany. A communist, Honecker was perhaps the most well-known official of the GDR, which he led from 1971 until his fall from power in 1989. During this time, Honecker normalized relations with the west but kept East Germany firmly in the Eastern Bloc. Honecker was known for supporting the building and defense of the Berlin Wall as well as his policy of consumer socialism, which made some western goods and limited private business available to East Germans. He was a prominent figure of the Cold War.

Honecker was born in Saarland, near the French border in Western Germany. He joined the Communist Party as a young man and was jailed during the 1930s and 40s by the Hitler regime and was sent to the Brandenburg Gordon Prison, a concentration camp near the capitol of Berlin. After an unsuccessful escape attempt, Honecker was freed when the Soviets liberated the prison camp in 1945. He returned to Communist Party politics and became a rising politician in the DDR. He was won of the few Politburo members to support Walter Ulbricht when most of the group attempted a coup d'état in 1953.

In 1971 he replaced Ulbricht, who was in declining health, as the head of East Germany. By the 1980s, relations between the DDR and the Soviet Union had deteriorated considerably. He and Soviet leader Mikhail Gorbachev had something approaching a personal animosity toward each other, and Honecker publicly disagreed with glasnost, pointing to the fact that he had implemented watered down reforms in Germany earlier. He fell from power in 1989 when his strict adherence to socialism fell out of favor. Not long after Honecker was deposed, the Berlin Wall fell. Facing criminal charges in Germany, he fled to Chile where he was taken in by a priest. Eventually the criminal case against him was dropped. He died in Chile in 1994. He was survived by his wife Margot, two children, and several grandchildren.

Honecker was often the subject of jokes for his dry, plain-spoken style and rather uninspiring speeches. Honecker also had some rather eccentric quotes such as "Neither an ox nor a donkey is able to stop the progress of socialism." Although he headed an oppressive communist regime, Honecker was one of the few communist leaders who was not a participant in mass murder, and under his administration the DDR had the most open society and the highest standard of living in the eastern bloc. However he remains infamous for his involvement in the Berlin Wall.