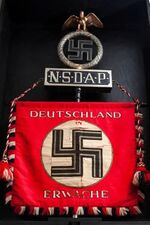 "Germany Awaken" (Deutschland Erwache) was the slogan of "enlightened" Nazis.[1]

Woke is the simple past tense and past participle of wake. For example, "Joe woke up on the wrong side of the bed."

To be woke or awake stems from the Age of Enlightenment, when "enlightened" atheists rejected God, challenged the Divine Right of Kings, and started the calendar over at the Year 1. By the 1920s and 1930s, "enlightened" Nazis regarded God and Jesus Christ as a "Jewish conspiracy" that even Jews and Marxists did not believe in. Woke "knowledge" is esoteric, for example holding firm the maxim that "religion is the opiate of the masses." So once a "true believer" casts off the opiate, they become "woke", "awake", or "enlightened." David Greenfield describes it as "a cultish term for a political cult that reframes extremism as a revelation."

In modern America, leftists often use the term to refer to a person unquestioningly accepting a radical political doctrine viewing society in terms of "white privilege." Just as Christians who find inner peace by accepting Jesus Christ into their lives are called "born again", some people who feel great anger at society because of what they feel is social injustice are called "woke." In truth, however, those on the Left who claim to be "woke" (which is incidentally an improper use of English) are actually the exact opposite - stupefied and dulled to the truth instead of being awakened.

According to David Brooks of The New York Times: