William Shakespeare (April 1564 - April 23, 1616), also called the Bard of Avon or simply the Bard, was an Elizabethan playwright considered the greatest in the English language and possibly the world for his masterful plots, poetic dialogue, and subtle conservative themes.[1] Many of his plays are beloved throughout the world, and are required reading in most English-speaking schools. Among the most famous are his Romeo and Juliet, the ending known to almost every English speaker, Macbeth, a renowned yet bloody tragedy, Julius Caesar, a historical tragedy depicting the former dictator of Rome, King Lear, the whimsical A Midsummer Night's Dream, Hamlet and Othello.[2][3] His works were performed mostly at his patron theater, the Globe Theater, and were first published posthumously in 1623 in the First Folio, perhaps due to a lack of copyright protection during Shakespeare's life.[4] The total number of words in all of Shakespeare's works is nearly 900,000, or slightly more than the word length of the Bible.

Shakespeare was a devout Christian, as proven by what he wrote in his will: "I commend my soul into the hands of God, my Creator, hoping and assuredly believing, through the only merits of Jesus Christ, my Saviour, to be made partaker of life everlasting."[5] Yet his work is also loved by people who are not religious, who consider it "the secular canon, or even the secular scripture."[6]

Shakespeare was a conservative then, and even more so by today's standards. His play The Taming of the Shrew is anti-feminist and censored from some schools today for that reason. Major conservative themes in his works include the sacred nature of the family in King Lear, the recognition of God in his plays and personal life, the existence of necessary war in The Famous Life of King Henry V, and the exposed injustice of taxation in Coriolanus. Not surprisingly, modern liberal literary critics often ignore these themes because of their place on the modern political spectrum. Shakespeare's hilarious jokes were often at the expense of the liberal base, such as his following quip for utopia by Dick the Butcher in Shakespeare's Henry VI: "The first thing we do, let's kill all the lawyers."[7] Shakespeare was politically incorrect.

His sonnets hint that Shakespeare was aware of same-sex attractions. Many refer to a "Fair Lord" or "Fair Youth," who scholars assume is the same person as "Mr W.H.", to whom the sonnets are dedicated. Further evidence includes the fact that there are very few exclusive female pronouns in these sonnets. In particular, sonnet 20 asks whether the narrator, presumably a man, has fallen in love with was originally a woman turned into a man by nature, which implies that homosexuality is an aberrant form of sexuality.

Shakespeare wrote 17 comedies, 10 tragedies, 10 historical plays, 154 love sonnets, and several other works of non-dramatic poetry. All his plays are freely available on the internet.[8] Shakespeare developed first as a poet and then, when his acting career was ended by the Plague temporarily closing theaters in London, he turned to writing plays.[9]

His 154 sonnets are short poems written in a very strict rhyme scheme. The sonnets fall into series or sequences. Most of them are read as expressions of romantic or platonic love; some appear to be written to a married woman known in the sonnets as the "Dark Lady," some to a young man known as the "Fair Lord."

Shakespeare and the other Elizabethan writers were gradually eclipsed by a new generation of playwrights led by Francis Beaumont and John Fletcher. After Samuel Johnson reissued Shakespeare's plays in 1765, there was renewed interest in the plays.

Shakespeare spent his early years in Stratford-upon-Avon, Warwickshire, and is also known as "the Bard of Avon." Because of sharing the name "Stratford," the towns of Stratford, Ontario, in Canada and Stratford, Connecticut, have become the homes of Shakespeare festivals where his plays are performed on a regular basis.

Shakespeare did not become famous until late in his life and few details are known about his early life. Although no attendance records remain, it is believed that he attended Stratford-Upon-Avon Grammar School, where he would have received a sound education in the Latin and Greek classics, reflected in many of his plays. The social class from which he came could be described as wealthy tradesmen. His father, John Shakespeare, was a glove-maker who became mayor of Stratford-upon-Avon despite almost certainly being a Roman Catholic (in the early part of the reign of Elizabeth I, penalties against Catholics were light and often not imposed). His mother, Mary Arden, the daughter of a farmer, was certainly Catholic. William Shakepeare himself knew many of the Warwickshire Catholic gentry who later led the Gunpowder Plot to overthrow King James VI. Shakespeare himself did not adhere publicly to the Roman religion and it is not known if, like many Catholics, he practised it in private.[10] There are few pictures of him but his near-contemporary as a playwright, Ben Jonson, stated that the famous engraving by Martin Droeshout, shown on this page, was a good likeness.

To his contemporaries, Shakespeare was not well-educated, and his coming among them and making a success was upsetting to the University-educated playwrights of the time. It is believed that the poet, Philip Green, was referring to Shakespeare when he wrote

The 'tiger's heart wrapped in a player's hide' is a reference to one of Shakespeare's plays, The Third Part of King Henry VI,[11] while 'shake-scene' is a pun or play on words on Shakespeare's name.

His plays show so much erudition that theories have arisen that those works were written by someone else. Famous candidates include Christopher Marlowe, the Earl of Oxford and Sir Francis Bacon. Most scholars reject these theories, but there are enough questions that new theories of Shakespearean authorship continue to arise.

A long-standing theatrical superstition holds that it is bad luck to refer to Macbeth directly by its name while inside a theater, and accordingly, actors traditionally refer to it obliquely as "the Scottish play." It is considered acceptable to voice the play's name only while rehearsing or performing the production itself.

Because Shakespeare's plays are so familiar, there are innumerable references to them in English literature. Sometimes his stories are recast into a different form. The musical West Side Story is a retelling of Romeo and Juliet, and the classic movie Forbidden Planet is a science-fiction version of The Tempest.

The reverence in which Shakespeare is held, and the archaic language of his plays (from the same era as the King James translation of the Bible, should not obscure the fact that his plays were (and still are) highly successful.

Ideas attributed to or made famous by Shakespeare

Many of the story lines for Shakespeare's works were based on prior works. But three of Shakespeare's plays were completely original in their plots: Love's Labour's Lost, A Midsummer Night's Dream, and The Tempest. 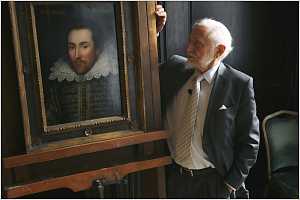 Several writers who knew Shakespeare, including Ben Jonson, attest to his authorship in the First Folio, a collection of his plays published in 1623. There is no indication that this claim was controversial, either at the time or for another 200 years.[23]

Although researchers discovered Shakespeare's will and several other personal documents, popular biographies published in the early 19th century stressed the contrast between Shakespeare's fame and how little biographical information was known.[24] Alternative theories of authorship concerning Homer and the Gospels also emerged at around this time. In 1857, American author Delia Bacon wrote a book arguing that Shakespeare was a fraud and that the real author of his work was Sir Francis Bacon (no relation). This book kicked off the "Shakespeare authorship controversy," which continues to this day. Various late 19th century figures took up Bacon's cause, including Ignatius Donnelly, Mark Twain, Sigmund Freud, and Helen Keller.

In 1895, a book by Wilbur G. Zeigler argued that English playwright Christopher Marlowe was the author of Shakespeare's plays.[25] While Marlowe's style is closer to Shakespeare's than that of other suggested candidates,[26] he died in 1593 when Shakespeare's writing career was just beginning.[27] In 1920, English author J. Thomas Looney suggested that the Earl of Oxford wrote the plays. Looney argued that Oxford's travels in Europe and aristocratic life at the English court made him a more plausible author than an untitled glover's son. Since the 1920s, Looney's theory has been dominate among Shakespeare skeptics.[28]

In 1996, computer style analysis at the Shakespeare Clinic at Claremont College in California compared Shakespeare's writing to that of a corpus of twenty-six Elizabethan authors, including Bacon, Marlowe and Oxford. Ten style criteria were used to test the corpus, including use of relative clauses and the use of hyphenated compound words. Shakespeare's writing was found have a style distinct from that of every other author in the study. The authors were ranked according to how similar their styles were to that of Shakespeare. Oxford scored 22nd of the 26 claimants.[29]

Shakespeare's The Tempest (1610) is believed to have been inspired by the experience of George Somers, who was shipwrecked in Bermuda in 1610. Oxford died in 1604, making him an implausible author, at least for this play. Despite these style and chronological difficulties, Oxford's claim continues to receive enormous attention.[30] It was the subject of a 2011 movie by Roland Emmerich called Anonymous.

Despite the overwhelming evidence against the theory of Oxfordian authorship, a majority of the U.S. Supreme Court—including Justices Antonin Scalia, John Paul Stevens, Lewis Powell, Sandra Day O'Connor, and Harry Blackmun—apparently all believed that the Earl of Oxford was the true author of Shakespeare's works rather than the commoner from Stratford.[31] Justice Scalia cited Shakespeare far more than any other Supreme Court Justice, according to one study.[32]