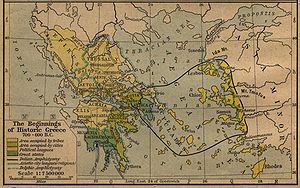 Ancient Greece was the area of the world similar to modern day Greece but also had Greek colonies in the modern nations of Turkey, and Macedonia.

Greece was responsible for much of modern democracy, philosophy, mathematics, and science, as well as a great deal of art and the introduction of the Olympic Games (See: Greek influence on Western Culture). Ancient Greek works had a great influence on the Romans. By the time of Christ, Greek was the dominant language and literary form of the day even though Greece itself had been conquered by Rome. Many of the early missionary journeys were into Greek areas and all of the epistles that Paul wrote were to churches set up in Greek lands. Paul's philosophical discussions in Athens and the belief of the people that he was Zeus, all tied into the Greek culture of the day as well as the New Testament books themselves being written in Greek and using a Greek translated Old Testament (Septuagint). Ancient Church Fathers were careful to draw a distinction between Greek culture and the unique message of Christianity that was meant for all.[1] The ancient Greek consciousness made a common reference to the Trojan War as the point of cultural origin, and self-awareness as a society in works such as the Iliad and the Odyssey.

While it was independent, the ancient Greek world never unified into a central polity. Rather, individual city-states fought for dominion over many centuries, fighting with one another as to who would be prominent. This was especially true between Athens and Sparta. But while they fought amongst themselves, when a foreign entity sought to invade, such as the Persian Empire, the Greeks would come together in a unity seldom rivaled in history. Alexander the Great of Macedonia would eventually subdue Greece along with almost the entire known world at the time, but that would only lead to the spreading of Greek culture as Macedon was Hellenistic in nature and Greece was once again "free" after his death. Rome eventually put an end to ancient Greek independence, but not its influence.

Greek life was dominated by religion and so it is not surprising that the temples of ancient Greece were the biggest and most beautiful.They also had a political purpose as they were often built to celebrate civic power and pride, or offer thanksgiving to the patron deity of a city for success in war.[2]

Greek mythology is a collection of stories and narratives concerning their gods, heroes and mythological creatures. Hesiod's Theogony is an important source of myths as well as Homer's epic poems.

Homosexuality and the effects on Greece

Homosexuality was generally accepted in Ancient Greece, although not in the way it is known in the modern world. Gay rights activists sometimes use Greece as an example of how homosexuality can be beneficial, normally unaware of methods such as pederasty which were commonly practiced. Some historians also believe that homosexuality helped lead to the downfall of Ancient Greece, as the population was not growing so much and food sources were not being produced as a result and armies became small.