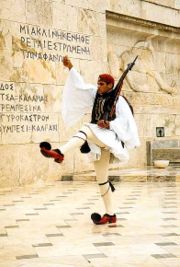 Athens is the capital of modern Greece; it was a famous city state in its early history.

Historians have not yet established the date Athens was founded but physical evidence documents a continuous human presence since at least 1,000 B.C. It was named after the Ancient Greek goddess Athena and was one of leading city-states of Ancient Greece, having a long running rivalry with Sparta. The city of Athens was taken by the Persians in 480 B.C. during their war with Greece but was reclaimed near the end of the war.

The Western notion of democracy first developed in Athens in the 6th century BC. Since that time, until the end of Antiquity in 5th century A.D., it was a major center of Philosophy, Sciences, and the Arts. Later becoming Christian under Roman rule, the closure of the Plato's Academy by Justinian (because of its association with paganism) marked the final turning from the ancient ways. Intellectual and artistic activity continued during the Byzantine period, and masterpieces of Byzantine architecture are still to be seen in Athens.

Athens re-emerged in the 19th century as the capital of the independent Greek state even though it was little more than a village. The main reason for that is that Athens represented Ancient Greece which was the main (if not the only) period of Greek History that interested the West at the time. Since then, Athens has grown enormously, its population receiving a boost with the arrival of refugees expelled from Turkey in the 1920s.